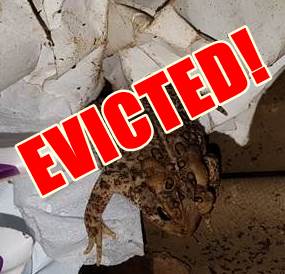 It is with a midly-heavy heart that I must inform the RWC community that Mr. Toad (or “Ted” as I had wanted to call him) has officially “left the building” – he is no longer a resident of my Urban Worm Bag (I can almost hear the worm and critter cheers).

I’m happy to report that he is alive and well, now living in a one-bedroom clear salad container, with recently installed skylights, wading pool, bedding, a cardboard tube, and a springtail-infested apple core.

OK ok – I do feel a bit guilty about this. He basically went from living in Toad Mansion (with 24 hour all-you-can-eat buffet) to a plastic prison cell…but alas, it had to be done! 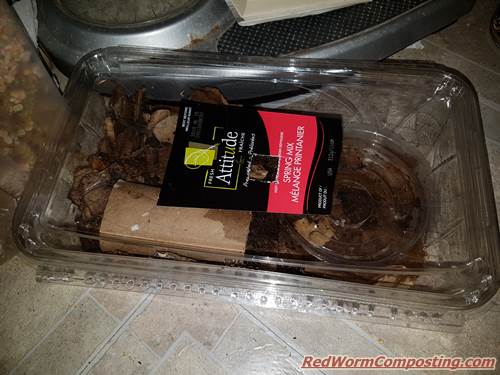 Weird worm behavior aside (I am still convinced the toad was at least partially responsible for all the worm roaming), his presence in the system was really affecting my vermicomposting efforts. I needed to be a lot more careful about air-flow (making sure the lid was always at least partially open), while also keeping the level of material low near the opening (he still got out twice).

Anyway – his new digs are really just a temporary residence until it warms up enough outside to let him go in the garden. And the kids and I will likely provide him with a “hopping bin” he can get a bit more exercise in each day.

After he was moved, I added another ~ 7.7 lb of food waste (bringing our total to nearly 47 lb) and a huge heap of dry cover bedding. If I continue to see roaming worms moving forward I will be very surprised! 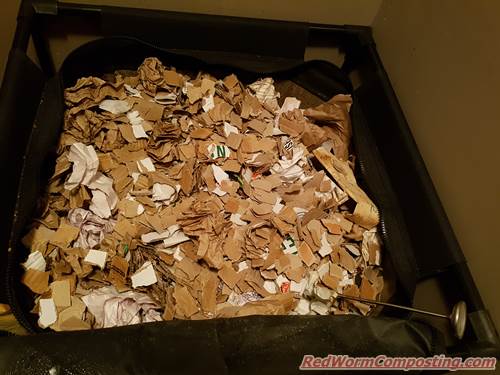 One other interesting observation to report, before I sign off.

It seems the UWB may channel liquid down to the bottom more than my Worm Inns ever did. Even with a substantial false bottom and keeping the bottom pocket open (for increased air flow), some liquid has made its way onto my basement floor. Mold has also started to grow on the wall of the bag down near the bottom – something I have seen happen quite a bit with Worm Inns.

It’s important to note that this is a cool basement location with what I suspect is a pretty high air humidity. If I had a fan for air flow or an actual dehumidifier down there this probably wouldn’t happen.

Whatever the case may be, it’s definitely not a big deal – more “interesting” than anything. 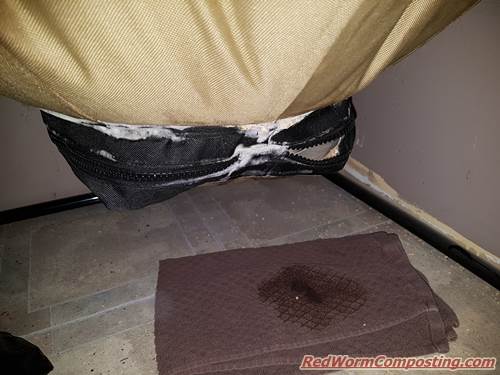 Should be fun to see where things go from here.
As always, be sure to stay tuned!
😎