Below you will find Neil’s second VB24 Journal installment. If you missed his first one you can find it here: Neil’s VB24 Journal – Day 1-8

Because my last journal entry was lengthy, I’m going to try to keep this one short. This should be an easy task given that these past six days continued to demonstrate how low-maintenance the VB24 can be. Other than feeding the worms on Day 12, I did not perform any maintenance other than occasionally spraying the system with some water.

~The Weekly Feeding~
Since the worms had an adverse reaction after their feeding on Day 5 (I counted about 50 worms on the sides of the VB24 the next morning), I decided to take certain measures when feeding them on Day 12 to ensure that the habitat was more suitable to them after this feeding.
On the evening of Day 12, I fed the worms a mix of food that consisted of banana peels, coffee grounds, carrots, cardboard and miscellaneous organic waste from the kitchen. This food mix, which filled no more than ¼ of a 5 gallon bucket, was smaller than the amount of food I added on Day 5.
I also added much more bedding than I did on Day 5 by covering the newly-added food with a thick layer of shredded newspaper (see below). 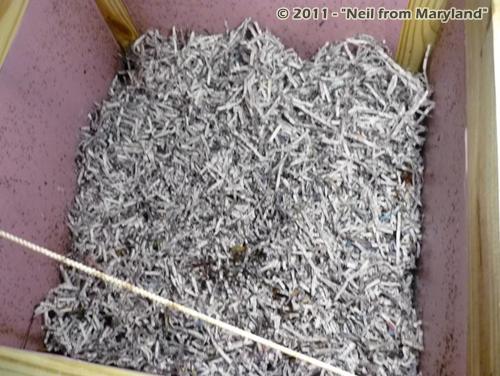 After adding the bedding, I used a garden fork to mix it with the food. Then, I sprayed the system with some water. Lastly, to ensure there was enough ventilation after this feeding, I propped the lid open slightly over night (see below). 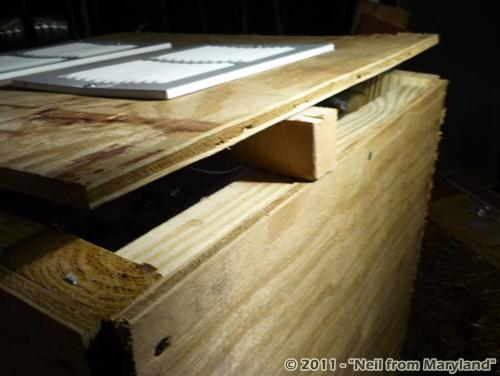 Unlike the morning of Day 6, I only noticed 4 worms crawling on the walls the morning after this feeding. Any number of variables could have contributed to this: less food, more bedding, increased ventilation, the cooler evening temperatures and/or the worms having an additional week to adjust to the system.

~Unexpected Occurrences~
There were two unexpected occurrences this week. First, one wily worm (pictured below) managed to work his way around all the cardboard and newspaper at the bottom of the bin and escape through the false bottom. 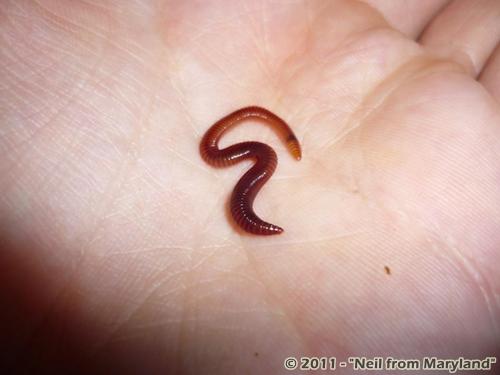 Despite his valiant effort, he was caught slipping through the bars of the false bottom, and I returned him to the bin just before he had a chance to enjoy a taste of freedom. (In reality, I did him a favor by returning him to the bin. Nowhere in my yard is there an environment as suitable for a composting worm; and, in all likelihood, he would probably have dried out and died right there on the garage floor.)

The second unexpected occurrence was the emergence of plant life in my VB24. I suspect that the soil that I originally added to the bin contained some seeds (along with the critters that also caught a ride into my bin). I was surprised that the weed pictured below had managed to grow in this dark environment. This is just another reason why you shouldn’t add soil to your worm bin. 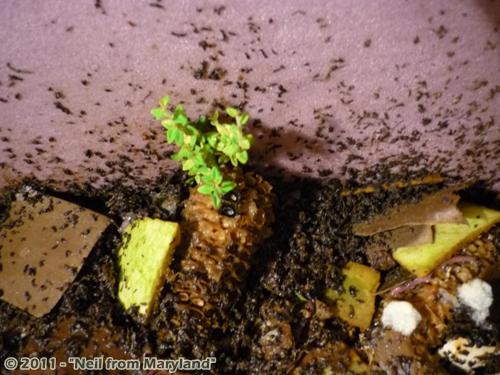 ~One last note about the watermelon~
On Day 5 I wrote about my first experiment which would study how worms reacted to watermelon rind that was cut up in different sizes. The watermelon rinds ended up being mixed being mixed in with the other food/bedding in such a way that it was difficult to monitor the worm’s progress on eating it. Next week I plan on conducting a worm-watermelon experiment in a more controlled manner.

Where do worms go to die?