It’s been almost a month and a half since my last VermBin48 update! As you may recall, I ran into some pretty serious Euro migration and leaking issues and ended up completely removing the tarp etc I had sitting down below.

Since then, whether the result of leftover frustration from that experience or my desire to to simply let the bin mellow (and dry) out, I’ve basically been neglecting the VB48 completely. I DID add one sizable batch of food, not long after my last update – but other than that I’ve been focused on other things.

Having nothing down below the bin (which has led to greatly improved air flow) helped to dry out the false bottom a fair bit, and also to curb the downward worm roaming. That said, I’ve still been finding quite a few dead or dying worms, not to mention a fair amount of vermicompost, down below the bin.

Yesterday I decided to finally do something about it!

The beast now has a skirt!
😆

I cut up a thick polyfiber feed bag into strips and attached several of them to the inner frame down below the flow-through floor. It was NOT easy or enjoyable work in the slightest. It took quite a long time (just finished up this morning) and was very awkward and at times uncomforatable. I felt like some sort of vermicomposting mechanic down below the bin with my light and tools! lol

But I gotta tell ya, it feels pretty awesome to have the job done!

I created two worm-friendly receiving bins using my trusty worm harvesting (aka “concrete mixing”) trays, containing a moist mixture of fall leaves and shredded newsprint, brown paper and cardboard. While the length of these trays is perfect for running from side of the VB48 to the other, when two of them are sitting down below there is a decent gap between them. I opted for a K.I.S.S approach, simply placing a sheet of cardboard in between them to make sure nothing falls down onto the floor.

The skirt simply gets folded into the bins (and over top of the cardboard) so that anything falling down along the edges (where most of it seems to be coming from thus far) ends up in the bins or on the cardboard. 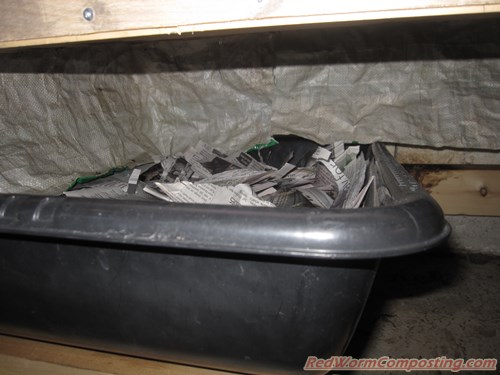 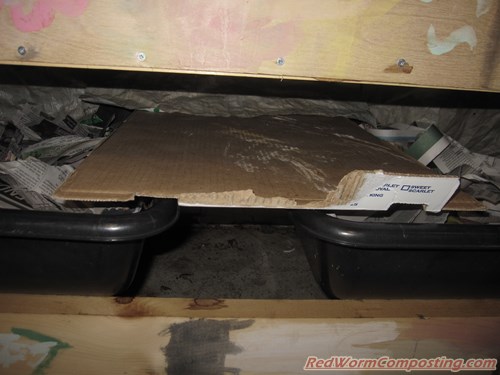 When I dug around in the trays this morning there were already worms in both of them, so I think it’s safe to say this will really help to reduce worm mortality over time. It’s also kind of cool to basically have two new vermicomposting systems operating down below the main bin. Will be interesting to see how things develop in them.

As mentioned previously, I’m not in any rush to start harvesting vermicompost from the VB48, so having the material falling down from the big bin into the smaller bins (where it will undoubtedly be processed even more) is totally fine with me.

Today I also decided to add quite a lot of food waste to the VB48 since there wasn’t even a trace of food from my last feeding. In an effort to keep things moving along (i.e. to avoid procrastination), I’m not going to worry about weighing everything that goes into the bin. It’s been a bit of a hassle (to say the least) – and I know I will be a lot more attentive when I can just throw in some food/bedding whenever I want without the need to weigh and record everything. 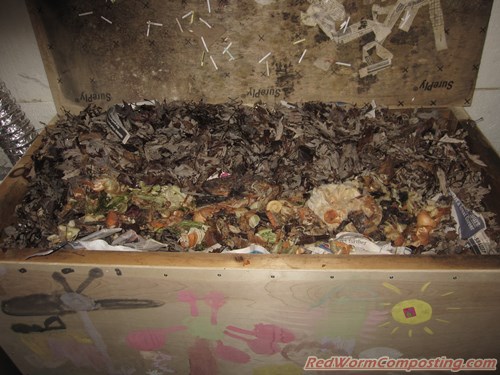 At some point I WOULD like to come up with a fun experiment that involves weighing the wastes being added (eg. I was thinking it might be fun to see how easy it would be to compost ALL our compostable household scaps in the VB48) – but I’ll likely wait until next month to get it started.