I’m sure some of you must be wondering how things are progressing with my VermBin48. It’s been a few weeks since my last update (which was not even technically a “Beast” update).

I haven’t really done all that much with the bin in the meantime (wanted to let it mellow out for a while), but I’ve reached a couple of important conclusions nevertheless:


Ever since adding nearly 20 lb of food/bedding (mentioned in the update I linked to above), I’ve started noticing signs of trouble in the system. Apart from the overheating situation (written about previously), I started finding dried up worms – and some still clinging to life – out on my basement floor. I also started to notice quite a lot of liquid draining down from the bottom of the bin.

One thing I should mention is that I never did add a harvesting shelf to my bin. I decided instead to simply lay a tarp (doubled over a couple of times) down below and to fold it up the inside of the legs to create a sort of flexible liquid and castings catcher. I even used it as a storage area for dry bedding materials, thinking it could help to soak up any occasional drops of liquid that might fall down (lol).

So yeah…unfortunately, adding all that snow along with multiple waterings eventually resulted in a substantial quantity of liquid draining down – and not evenly either! There seems to be three or four key spots where the most of the drainage has occurred. The result of this is that I ended up with quite a bit of liquid down on the tarp.

Oh, and did I happen to mention that cheap polyfiber tarps don’t actually hold liquid all that well? They don’t. So I also ended up with a pool of liquid down below on the basement floor.

But it gets even more interesting than that!

As I recently discovered, apart from all the dead dried up worms I’ve been finding on the ground in my worm room, there were even MORE living worms down on, in, and under the tarp!

Today I decided enough was enough. I pulled out all the bedding materials and started rescuing worms. Initially I thought it might be “fun” to count them all, to see how many were Euros and how many were Reds. But I quickly realized that not only were there a LOT more than I thought, but that they were virtually ALL Euros (I literally found ONE Red Worm)!

The first image below will give you some idea of how things looked under the tarp – but I can assure you there were FAR more than that in total. 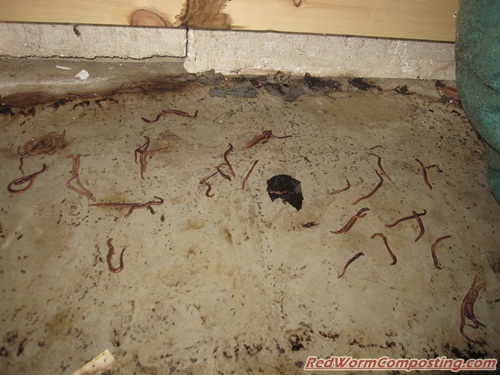 This next image shows the main gob of worms from my “rescue bin” (where I put all the worms I was finding). 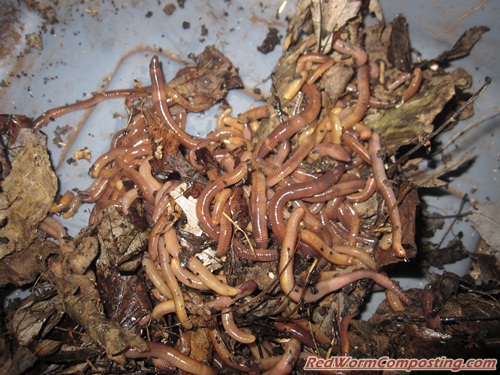 In light of my rather disturbing discovering, I’ve decided to discontinue my VB48 Euro rearing experiment (lol). All rescued worms were transferred over to a new Rubbermaid tub system, and I’ll gradually be transferring over any other Euros I find in the VB48 (there are still loads of them in there so it may take awhile).

I’ve removed the tarp for now, and have replaced it with an old sheet. Needless to say, I won’t be adding ANY more water in the foreseeable future. I’ve actually been keeping the lid completely off for quite some time now, so things have (thankfully) dried out a fair bit in the bin.

I DO want to add some more food fairly soon though.
I’ll keep you posted!
8)