Just a quick follow-up to my last “Beast” update. It seems those ~16 lbs of coffee grounds etc has resulted in some pretty serious heating in the bin (surprise, surprise! lol). Up near the top, many zones have been reaching temps above 35 C (95 F) – although, I wouldn’t be surprised if there is plenty of cooler habitat down towards the bottom of the system.

In an effort to cool things off AND moisten everything (grounds tends to dry out pretty quickly when overheating), I decided to try something a wee bit different from the norm… 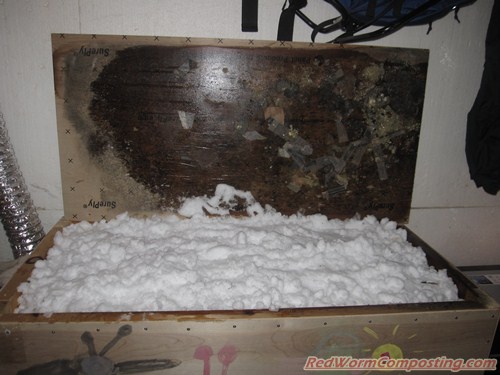 There was a fairly thick layer of newsprint up top, so I wasn’t overly concerned about shocking the worms too badly, especially considering the warmth coming up from below. It took quite a few hours for all the snow to melt, yet – interestingly enough – it didn’t end up having a major impact on the temps (I’ve been quite happy with the settling and moisturizing effect though).

I checked on the bin a few minutes ago, and while there are still plenty of hot spots, I was able to find quite a few cooler zones around the periphery (especially towards the back of the bin). There are loads of worms up in the moist newsprint layer where temps are just fine.

I am planning on adding another layer of dry newsprint and another batch of snow today. Cooling effects (or lack thereof) aside, I really do like the way the melting snow slowly moistens everything.