I finally got back out to my trusty “winter worm food bin” yesterday. It seems my planned “holiday worm treat” ended up postponed due to my getting swept up in the hustle and bustle of the holiday season.

I was happy to see that temperatures in the food bin were still quite warm – especially considering the fact that ambient temps have dropped recently – and we even had a decent winter storm this week. 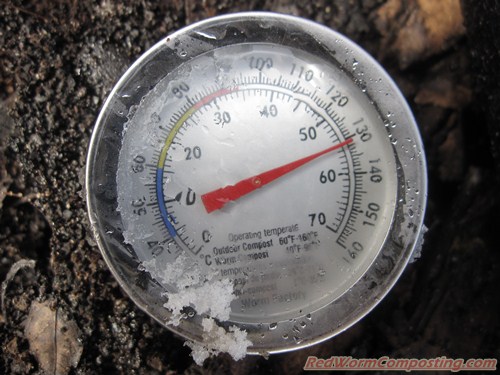 I collected several tubs of the warm grounds-leaves-food mix from the bin – a couple of them went directly into my winter bed, and one was reserved for the VB48. The winter bed seems to be cooling off a bit (as indicated by the smaller zone of snow melting you can see in the image below), so I wanted to make sure to ‘stoke the fire’ a bit before temps dip too low. 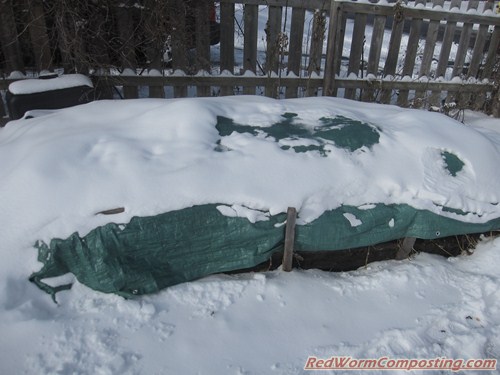 Before heading inside to feed the Beast, I topped up the worm food bin with more fall leaves, food waste and coffee grounds. All of these were frozen, so I was a wee bit concerned that the system might not be able to bounce back to its almost-hot-composting state.

[NOTE: I checked on temps this morning and it does indeed look like a bit of a rescue mission may be in order. Although I was able to find some zones with temps as high as 30 C (86 F), my insulation blanket up top was frozen stiff and there seemed to be plenty of colder zones in general. I am thinking a nice warm slurry of alfalfa (i.e. alfalfa cubes soaked in warm water) mixed with molasses should do the trick!]

Once inside, I started weighing out my mix one ice cream tub at a time, then dumped it into the VB48. The total weight of mix added was just over 16 lb. Sounds like a LOT to add to worm bin at any one time, doesn’t it? It’s important to remember, though, that this is the Beast we’re talking about (lol) – it’s a BIG bin, with lots of space, so 16 lb of material doesn’t actually take up much room once spread around. 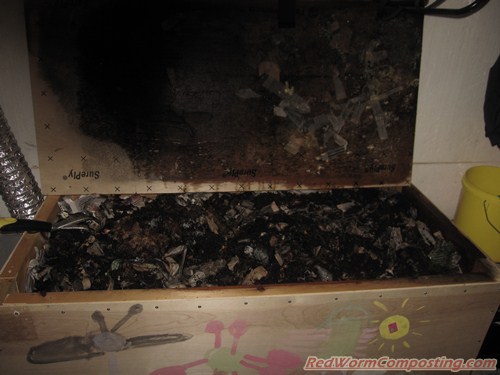 I should mention that I also mixed in some snow with my food mix so as to provide a cooling effect and some slow-release-moisture. Although the weight of snow was included in the 16 lb, I also left out the weight of one of my tub-fulls, so that likely compensated for this extra weight (especially since the snow was pretty light and fluffy).

In addition to the snow, I also added a fair amount of water (not included in weight), and a nice thick layer of shredded newsprint over top (recorded as a separate weight). I keep meaning to cut back on my bedding additions, but the underside of the lid has become a bit of a slimy, wet critter habitat as of late, so I want to see if I can get things a little drier up top.

In case you’re curious, I’d estimate the TOTAL amount of material added to the bin so far as up around 100 lb – the only reason I don’t have an exact figure is that I didn’t weigh the materials I added when setting up the system (my conservative estimate is 20-30 lb, which includes a LOT of bedding plus several spaghetti squash). Of that total, ~ 35-45 lb would be considered actual “food”, while the rest has been bedding (including fall leaves).

I’ll likely try to let the system mellow out for a while now that there is a fair amount of food in there for the worms. I also don’t want to push my luck with this apparent “victory” over the scuttle flies – I saw a few of them yesterday, and I know they’ll be capable of a comeback if I’m not careful! As much “fun” as it is to put my vermicomposting abilities (and patience – lol) to the test, sometimes it’s just nice to avoid these sorts of challenges.
😯

Creating a “Happy Place” for Your Worms