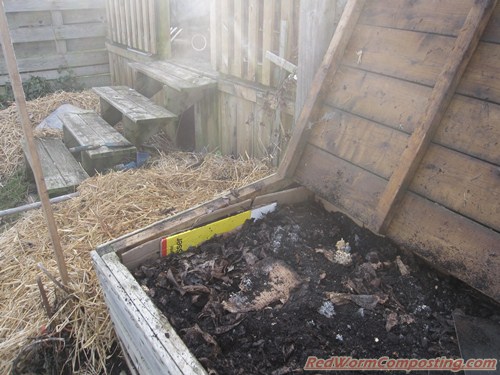 Earlier in the fall I emptied out my “ultimate” vermicomposting bin for the sake of saving as many of the worms as I could. Interestingly enough, the conditions inside were much closer to “ultimate” than back during the summer. It was nice and moist, and there were plenty of worms to be found.

Another reason I wanted to empty the bin out was to make space for stock-piling the coffee grounds I pick up weekly from a local coffee shop. With my outdoor composting activities tapering off considerably once fall arrives, it’s nice to have someplace “easy” to put my grounds, rather than constantly having to find spots in my winterized (straw etc covered) outdoor beds.

In all honesty, while I was sure all those coffee grounds (with sheets of cardboard sitting underneath) would provide great winter protection for all the worms remaining in the bottom of the bin, I certainly wasn’t expecting anything in terms of actual composting potential. This isn’t a HUGE container (by hot composting standards anyway), and on its own it has little in the way of protection against the cold.

A short time ago, when the bin was nearly full with grounds, I peeked inside and noticed some obvious warmth in the material (as I recall there was condensation on the underside of the lid). Digging around, it became even more obvious that there was decent heating going on down below. I found myself becoming a lot more interested in actually putting the system to good use.

One of the annoyances of winter worm composting is the fact that most of my “worm food” needs to be thawed out before I can add it to my winter composting system (more on that a bit later), since it either sits out on my deck and freezes, or it gets put in my deep freezer (with similar results, of course) until I’m ready to use it. As you might imagine, adding the frozen material to my windrow might not be the best idea when I’m trying to conserve heat!

Seeing the heating in my coffee grounds bin made me think it might be useful for warming up frozen food materials before adding them to the winter bed. That’s when I remembered the bags of fall leaves sitting in my shed and had an additional “lightbulb” moment. I figured all of these materials mixed together and allowed to pre-compost for a bit in the bin might prove to be an excellent food material for the winter bed.

So, I added some bags of partially-frozen food wastes, and mixed in lots of leaves. I then added a thick layer of leaves over top, along with one of my “compost saks” for some additional insulation. 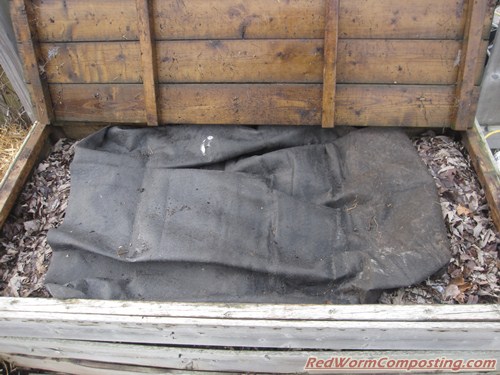 Today, I decided to take things one step further by insulating the inner walls of the bin with sheets of corrugated cardboard – in much the same way as when I set up my “ultimate” bin. 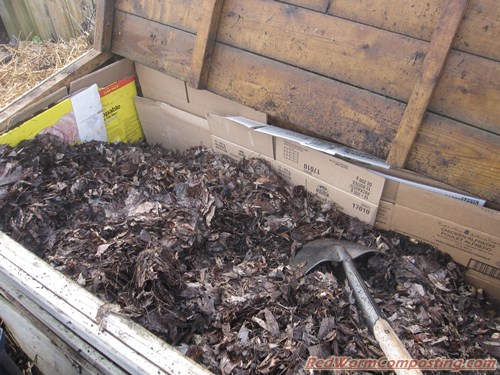 A quick check on temperatures inside the bin showed me that my earlier efforts had paid off – as far as successful hot composting goes, anyway! Temperatures were up around 55C (131F). 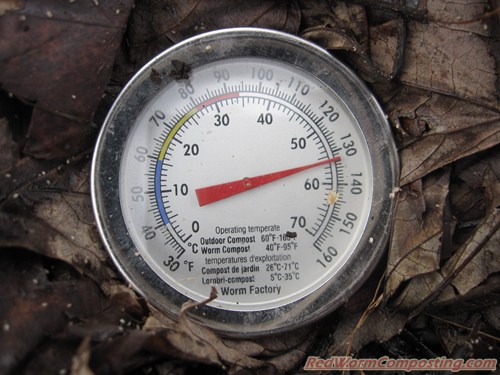 I took some readings in the open (but straw-coverd) bed sitting beside the wooden bin as well, and was very surprised to find temps up around 40C (104F) right next to the wall. Then I remembered that I had added some moistened alfafa cubes a short time ago.
😆 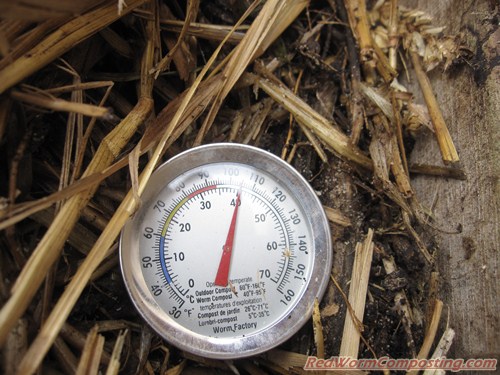 As far as my winter worm composting bed goes – this year I haven’t been taking the project as seriously as I have in previous years. Initially, I wasn’t even sure if I’d bother doing anything more than heaping up a thick layer of straw over top – but I ended up coming around a bit, and have since added even more straw plus a basic tarp over top.

So far it’s been a piece of cake to keep the bed active – but (like all of last winter) there hasn’t been much in the way of serious cold/snowy weather. I’m actually really hoping we get more of a winter this year so I can at least put these systems to the test! 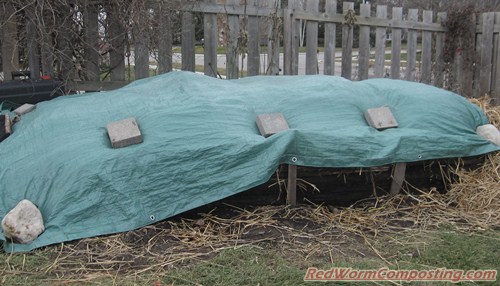 I’ll be sure to keep everyone posted!
8)

Cooking up a Holiday Worm Treat