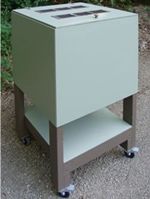 Late last week I quietly launched the plans for the VermBin24 DIY flow-through bin. I didn’t make an an announcement on the blog, or send anything out to the main RWC email list, though, since there were a couple of things I still wanted to take care of.

For starters, I wanted to format the “photo-journal” Neil (“from Maryland”) put together for fellow plan-owners and get it uploaded to the member’s area (that’s now taken care of).

I also wanted to put together a Q&A blog post so as to answer some of the common questions people may have (some of them are based on actual questions that have come in – others simply cover topics I think some people will be curious about). As the title implies, this is that post!
8)

What format are these “plans” delivered in? Will I receive them in the mail?

These plans (with guide) are packaged as a PDF document (requiring Adobe Reader to open – virtually every computer already has this installed though, so no worries). They can be downloaded inside the VermBin member’s area. Nothing will be mailed to you.

What are the advantages of electronic format?

For starters, you can basically access them instantly (once you are successfully registered). Also, we will almost certainly be updating these plans (have done so once already) as new design features get added, more info added to guide etc. Lastly, offering the plans in electronic format also helps to keep the price fairly low since we don’t have to pay for printing/binding etc.

Will I be able to print these plans out?

Absolutely! We’ve added some security features to help reduce copying/sharing of the document, but printing is obviously allowed and we totally understand the desire/need to do so.

The plans are intended for single use (as in one set of plans per person) – and each customer’s contact information is stamped into the document – but there’s obviously only so much you can do to prevent people from sharing an electronic file. All we ask is that you keep your sharing within reason (family members etc), and whenever possible please refer people to the site if they have an interest in the plans. Money generated from the sale of the plans (and other products we sell) helps to support the continued development of Red Worm Composting.

How much will it cost for the supplies needed to build this bin?

There is obviously no set-in-stone answer for this since it will depend on a range of different factors, such as where you live and how determined you are to save money. Based on the estimates received from Joe and Neil, I’d say that it’s likely to cost somewhere in the vicinity of $75-$125 USD if you are buying all new materials. I have little doubt that there are plenty of people out there who will be able to construct the bin for less than that though.

Will I need any specialized equipment to build it?

Another one that’s a bit difficult to answer since “specialized” is somewhat subjective. If you are a completely non-DIY person and have no tools whatsoever, you will likely need to buy some (or borrow some) in order to build the bin. That said, my prediction is that most people would have most of the equipment needed to put the VB24 together. The only additional tool-related item Neil had to purchase was a 1″ drill bit if I remember correctly.

What level of skill is required to build a VB24?

As a self-described “DIY Dummy”, my initial gut feeling is that this is a “medium” level project. Anyone with a decent amount of DIY experience would likely consider it pretty easy I suspect. If you are not very comfortable with tools, my recommendation would definitely be to find a friend or family member who can help you (not a bad idea regardless of your level of skill actually). I feel pretty good about my chances of successfully completing this bin – but I am still enlisting the help of my dad since I think it will just generally help the process to go a bit more smoothly.

As the name implies, the main bin itself is basically a 24″x24″x24″ box. It stands 42″ off the ground (without wheels).
The actual internal volume is somewhat less (than 24x24x24) – with the insulation panels it works out to somewhere in the range of 5.6 cu ft or so. I consider the Worm Inn to be a decent sized system, and it is about 2 cu ft – so hopefully that gives some perspective.

How many worms should I stock it with?

I like to do things my own way, and never use any specific guidelines when stocking a new system. When I stock my own VB24 (once built) I can guarantee I’ll just add a whole bunch of wormy material from another system (my preferred method for starting up a new bin/bed). Neil stocked his VB24 with 5 lb of Red Worms, and they seem to be doing well. I definitely wouldn’t start with any more than that, and really, you’d probably do just fine with 1-3 lb. Red Worms reproduce pretty quickly, so as long as you don’t mind being a little more patient, even a fairly modest starting population should work just fine.

How many lb of waste per day can I process with a VB24?

This is a question I have always tried to steer clear of, regardless of the system being used. There are countless variables that can affect the processing speed of a vermicomposting system. Here are some common ones: 1) temperature, 2) size of worm population, 3) maturity of the system, 4) type of waste being added, 5) waste handling practices (pre-composting? grinding? etc etc), 6) experience level of person taking care of system, 7) moisture content. This is definitely something I plan to test once I’ve got my own VB24 up and running, but even then I’ll be left with a set of results that apply to my own situation (certainly not set-in-stone numbers that everyone can expect to see with their own system).

Should I use this bin outside or inside?

The VB24 will likely work just fine outside – perhaps even more effectively than a lot of other home “worm bins” – but for the best results, my recommendation is to keep it in a location with a controlled environment. This is especially true if you live in a region that experiences heat and/or cold extremes.
Apart from the external environment affecting the vermicomposting process, it can also affect the bin itself. Obviously, a VB24 sitting outside exposed to the elements won’t last quite as long as one sitting indoors.

Can this bin be used when the weather is cold?

The design DOES feature (optional) insulation panels, and as mentioned above it also holds a decent volume of material. That being said, it’s important that people don’t assume this means it’s a “winter bin”. I’m sure with some sort of small external heat source it would be a lot easier to keep this bin from freezing out in a uninsulated garage (for example) during winter than if using a regular plastic tub system – but please do keep in mind that it’s still not a massive bin, so there’s probably only so much you can expect as far as self-heating (and heat retention) goes.

What makes a VB24 system better than a Rubbermaid tub system?

Where do I start? (lol)
There is a MUCH better air-flow/moisture balance, so the composting zone will stay much more oxygenated – this is vitally important for any sort of aerobic composting process (as the name implies). This results is faster waste processing and better quality end product. Obviously, the fact that it’s a flow-through bin also means that harvesting castings/vermicompost will be a lot easier (more on that in a minute).

Will a VB24 system dry out really easily?

With increased air flow there can often be increased risk of drying out, but the VB24 actually retains moisture quite well – especially if you choose to install the insulation panels. You may need to add water from time to time (especially if it’s outside during hot/dry weather), but it won’t likely be as problematic as some other wooden bins.

How do I harvest castings from this bin? Is there some sort of harvesting mechanism incorporated into the design?

This is pretty straight-forward. Simply use some sort of fork, rake or brush to scrape material down through the floor bars. At this time there is no scraping bar or anything like that included in the design – but this may be something we’ll consider adding as an optional feature in a future update.

When can I start harvesting castings from the bin?

This will of course vary from system to system (again, remember all those variables we talked about earlier). Generally speaking, you should probably be prepared to wait at least 3 months or so before your first harvest. We strongly recommend the installation of some sort of “false bottom” using cardboard/newsprint etc, and the basic idea is that once this has broken down completely (assuming it was reasonably thick) you should be well on your way to being able to harvest finished material from the bottom. You should also be aiming to build up the levels of material in the bin so that most of the worms will mainly be concentrated up closer to the top of the system.

What about the larger VB bins – will you be releasing plans for those as well?

Yes we will. We are hoping to release a “VB Series” plans bundle sometime in October. It will include the VB24, VB48 and VB96. All those who purchase the VB24 plans before then will be able to upgrade to the full bundle for only $5 once released (but this is of course completely optional).

Will you be selling actual VB24 bins (kits to build etc) at any point?

This is an idea that Joe and I have toyed with a bit. We’ll likely look into the possibility at some point, but it’s probably safe to say that actual VB24 bins won’t be available for purchase before 2012, if at all.

Can I build and sell VB24 bins?

If this is something you’d be interested in doing, please drop me an email. We’re pretty open to different ideas, and there may be the potential for setting up various types of arrangements. Please DO NOT simply start doing this on your own – especially if you intend to use the VermBin24 name.

Can I promote the plans and make money?

I will likely be setting up an affiliate program for VB24 plans at some point if there seems to be enough interest. Basically this would be intended for those who have their own website(s), and would involve simply referring people to the VB24 sales page via a banner or basic link (these would contain a special affiliate link so any sales that resulted from the referral would be tracked).