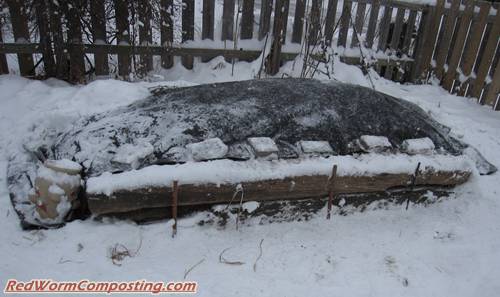 Initially I was worried that my coffee grounds pick-up commitment was going to end up being a real hassle this winter. As it turns out, though, it’s been more of a blessing than anything – and I have a sneaking suspicion that this could end up being my most successful winter vermicomposting season yet. One of my challenges in past seasons has been the lack of a decent supply of composting “fuel” materials to add to my bed – especially by the time late January and February rolled around (when I needed them the most). With a steady supply of grounds that certainly won’t be the case this year.

I don’t know what it is about coffee grounds – well ok, it’s likely the small particle size (thus large total surface area) and nitrogen content – but they seem to be the “ultimate” material for getting a heap to warm up. That being said, they definitely are not an ideal material (for vermicomposting anyway) when used alone. In my experience, they tend to overheat and/or dry out, so it usually takes some time, even in outdoor beds exposed to the elements, for them to become a good quality worm habitat. One of my goals with with this winter system has been to see if I can make the grounds “worm-friendly” more quickly by mixing them with other materials.

On a whim, I decided to try something quite different right off the bat. Rather than burying the grounds down below where the worms are, I’ve simply been dumping them on top and gradually mixing them in with the thick layer of straw (originally added for insulation) using a garden fork. I’ve been making a bit more of an effort to bury the food wastes, but they are still being added up in the straw zone (above where most of the worms are).

So far, this seems to be working even better than expected. Rather than ending up with overheating down in the worm zone, it’s like I’ve created a thick, heated blanket over top of them. Over time, the lower zones of the “blanket” will undoubtedly cool off and become food/habitat for the worms as well, so I suspect that conditions in the bed will actually improve as winter progresses (not decline as they often have in the past).

Anyway – if you want to see the bed a bit more “up close and personal”, you can check out the video I made:

Stay tuned!
Will likely provide another update in a couple of weeks.
8)