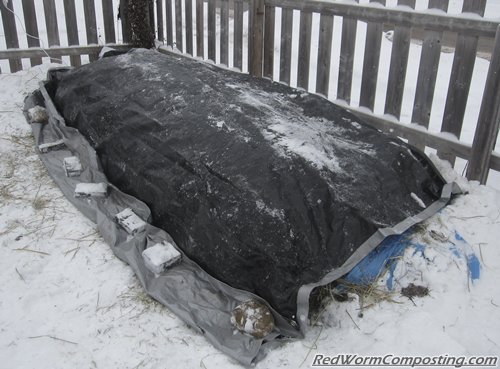 Winter Worm Windrow – On the road to recovery? We shall see!

As newsletter subscribers will likely know by now, things have NOT been going all that well on the “winter worm windrow” front. Unfortunately, I haven’t had all that much time to tend to the system since my last update (“Winter Worm Windrow – 12-09-09“), and not too surprisingly, temperatures have only gone down since then. 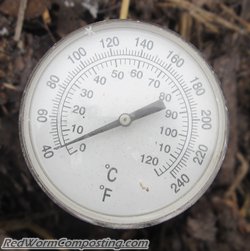 When my dad and I opened up the tarp yesterday, it became pretty clear that the situation was even worse than expected. The upper materials were completely frozen and the warmest temps we could find further down seemed to be in the 4 C (~ 39 F) range.

My dad brought me a bale of hay and a bale of straw, and I had already been warming up some coffee grounds and food scraps indoors for a number of days (they had been sitting outside previously), so I was feeling optimistic as we started our rehabilitation efforts.

I decided to start be breaking up and spreading out some of the uppermost materials so as to provide us with a more stable surface upon which to pile all our new bedding/food. Next, I connected a length of rope lights to an outdoor extension cord and ran them through the middle of the bed. 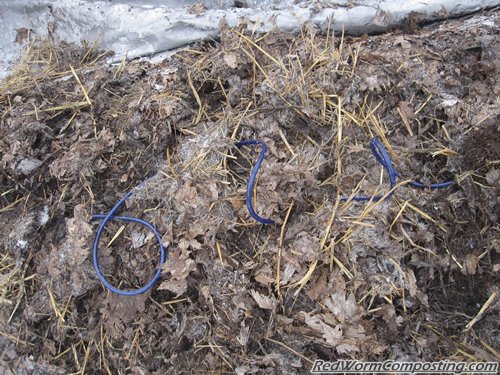 I’m sure many of you will recall the post I wrote about using rope lights as a potential method for warming up indoor worm bins (see “Winter Worm Bin Heating – A Novel (and Festive?) Approach“). Well, given the grim situation I seemed to be facing with my outdoor bed, I thought it might be more appropriate to test the lights as a means of helping to warm up my windrow.

Once the length of lights was partially buried, we then added a bunch of shredded cardboard. I wanted to have an absorbent layer to add the coffee grounds and food waste on top of, and I figured it wouldn’t hurt to bulk up the bed with some more carbon-rich material in general. 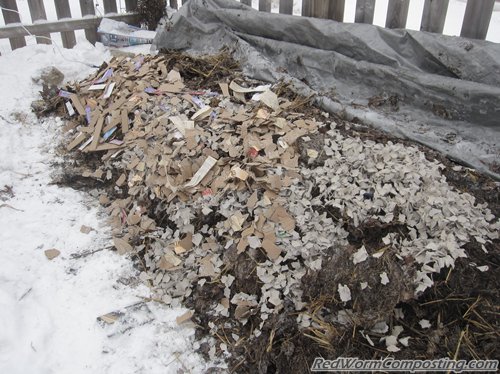 Next we added a thick layer of hay (which should provide both food and insulation), before dumping all the coffee grounds on top 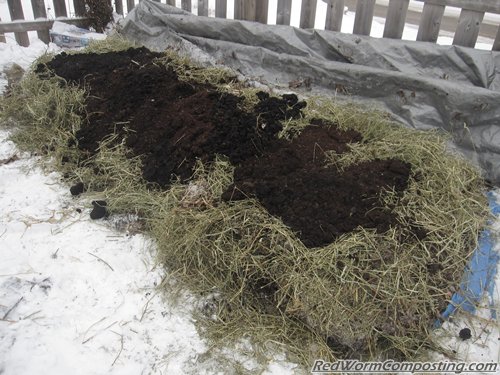 We covered the grounds with another thick layer of hay before adding the food waste (which looked a lot less impressive, volume-wise, than it had while sitting in my “jumbo food scrap bags“) 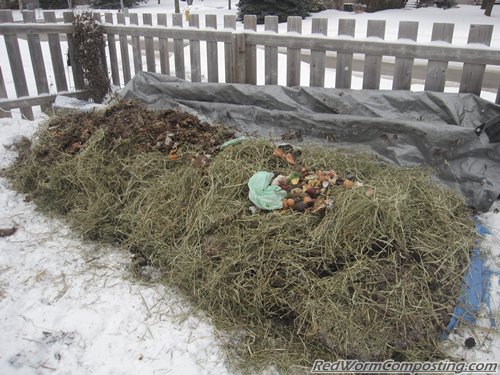 We added one last layer of straw, then I poured a mixture of water and “friendly microbes” (originally purchased for bokashi making) – which also contains some molasses – over the bed, primarily in the zone where the rope lights are hopefully going to help warm things up. Hopefully this will help to kickstart some more microbial activity (thus generation of warmth). 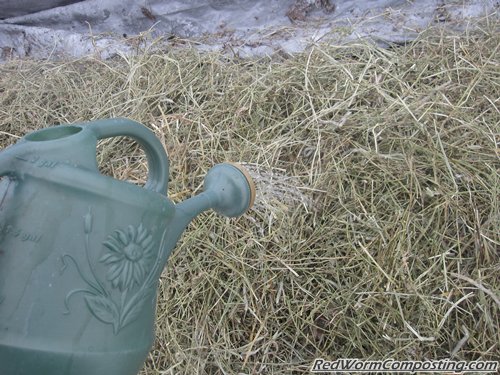 Finally, we added a ratty old blanket, to serve as a bit of extra insulation, before covering the bed with the tarp once more. 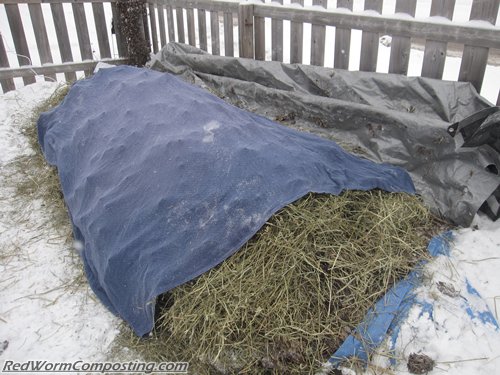 I decided not to bother adding any of the straw just yet. I figured there was no point adding heaps and heaps of extra insulation before there was any real warming going on since it will only end up getting in the way as I tend to the bed this week.

I am planning to pour a water/molasses mixture on the bed today, and may even bury a hot water bottle in the middle to see if I can help to get things rolling.

The problem with a big mass like this is that once it gets super cold it can be VERY difficult to get it heading back in a positive direction!