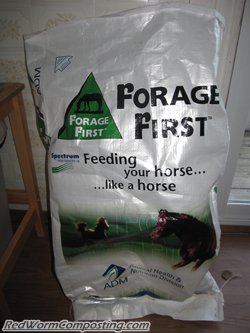 In my winter windrow post, I mentioned a “new food scrap storage approach” – the one I’ve adopted specifically for this winter composting experiment.

As many of you know, I am a big proponent of storing food scraps in some sort of container/bag for a period of time prior to adding them to a worm composting system. Aside from allowing the materials to pile up a bit, it also gives everything the chance to start rotting a little (i.e. gives the microbial community some time to become established). In the case of winter composting I am obviously NOT going to want to head out to my winter bed EVERY time one of my small food scrap bags is full! Not only will it mean trudging out into the cold a lot more often, but it will also be really counter-productive.

We are trying to conserve warmth as much as possible, so it obviously doesn’t make all that much sense to be opening up our tarp and digging around in the windrow all the time – valuable warmth will be lost everything we do this. By adding a lot more material at once, we not only greatly reduce the number of trips, but we also add a large quantity of (indoor-temperature-warm) ‘fuel’ material all at once, thus helping to generate warm zones in the bed.

As you can see in the picture, the vessel (for lack of a better word) I have chosen for my ‘jumbo food scrap holder’ is a large horse feed bag. I tried to find the volume of the bag written somewhere on it, but had no luck – I’m sure most farm folks will have a pretty good idea of size I am talking about here. Sitting flat on the floor, the top of the bag comes pretty close to my hip.

Like any ‘food scrap’ holder, this one started with a good ‘false bottom’. I had two cardboard pizza boxes sitting around so I decided to shred them up for this purpose. 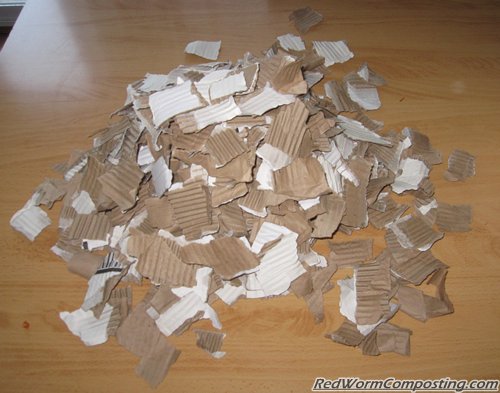 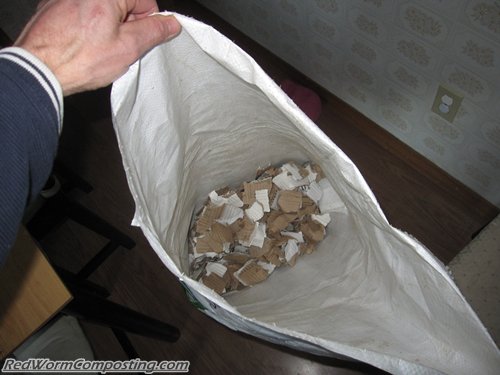 I also had a big bowl of food scraps ready to go, along with another small bag full (I keep a biodegradable bag in a special scrap holder under my sink). Interestingly enough, the material from under my sink had a pretty decent fruit fly population, which actually surprised me since they hadn’t really made their presence known. As I’ve written elsewhere, I have been battling a pretty bad infestation in my basement, which I am happy to report is finally starting to dwindle – but the fly numbers upstairs has been pretty minimal, or so I thought. 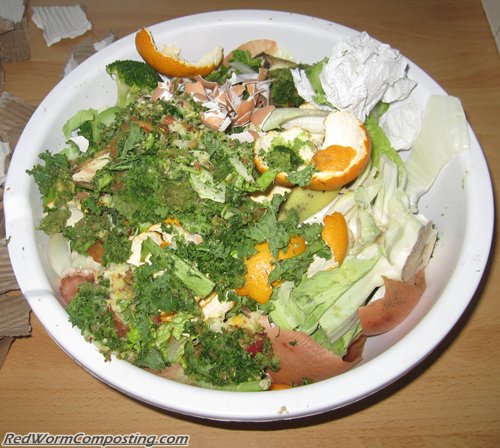 We are still doing a lot of juicing these days so that has really helped as far as producing lots of ‘worm food’ goes. We basically fill the big plastic bowl (pictured above) every day, so it won’t take all that long to fill my big scrap holder, despite its ‘jumbo’ size!
🙂

One thing to mention, given the fruit fly presence in the house still, I decided to put the big bag out on my deck while it is getting filled. Once it is ready to be added to the windrow, I will bring it back inside and let it warm up for a day or two (making sure to prevent any fruit flies from invading it). I will still be harvesting worms from my outdoor bed for local customers so the last thing I want to do is start them off with a fruit fly invasion as well!
😯

When we set up the big winter bed we used most of the materials I had on-hand, but I made sure to hold on to some of it so I would still have some extra stuff to add along with my food waste. One particularly nice leftover – and an accidental one at that – was a garbage can full of beautifully mulched grass clippings and leaves. Had I realized it was there, I almost certainly would have added it along with everything else. In hindsight, I am definitely glad it went unnoticed! 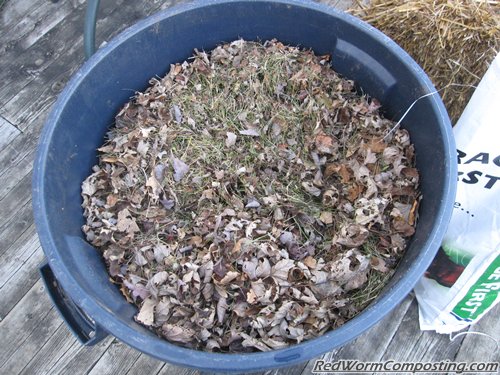 This material will work really well as a bulking agent to mix with my food wastes in the jumbo sack, along with more shredded cardboard etc. Again, these sorts of materials will help to improve air flow (important for heat-generating microbial activity) and up the C:N ratio – we certainly don’t want to end up with ammonia gas being released (a common occurrence with low C:N) inside the windrow. With the grass clippings mixed in there, this stuff will also be a great winter food as well (likely a fair bit slower to break down than the food scraps). 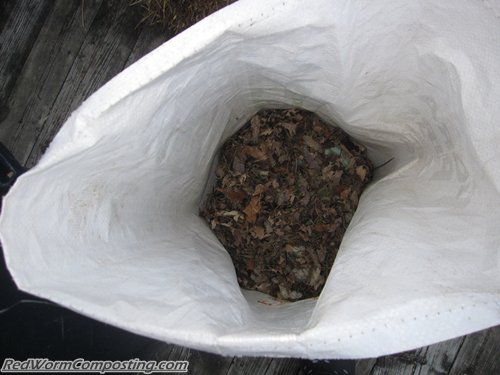 Food scraps covered with a layer of mulched grass and leaves

I have at least a few of these horse feed bags so I may even fill them ALL before adding them to the windrow, again helping me to compound my bed-warming efforts. Speaking of ‘bed warming’ – things seem to be moving along very well in that department. The last time I checked, the tarp over the bed was actually somewhat warm to the touch. I was a little worried by that, but when I opened it up the bed itself didn’t seem overly warm by any means. I will need to keep an eye on this during the early stages of winter, since we definitely want to save most of that heating potential for later in the season when we REALLY need it!
8)