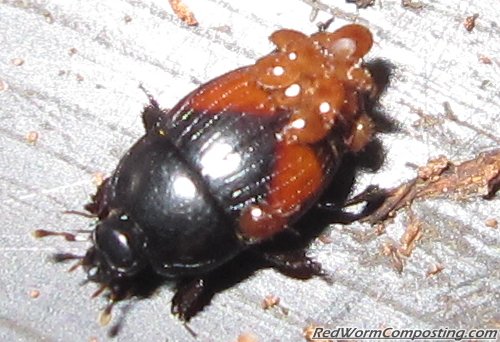 Along for the ride, or causing harm? Tiny mites hold on tight as this beetle scuttles about

This is a topic I have been meaning to write about for quite some time – what stinks is that I definitely had more photos to include but now can’t seem to find them at all.

One of the things that kinda held me back from writing about this sooner was my concern that many people might start to worry about ALL the mites that appear in their bins. I’ve tried to emphasize the fact that there are countless different species, and literally only one or two even known to be at all parasitic to worms, but I suspect that photos like these ones I’ve included might still strike fear into the hearts of a lot of worm bin caretakers. That being said, I think just the appearance of the beetle larva picture below might be enough to do that!! (wouldn’t want to encounter a human-sized one of those in a dark alley!)
😆 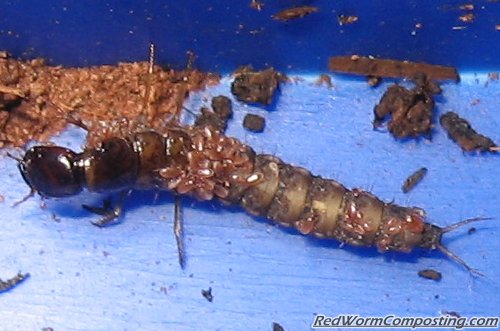 Over the past couple of years I have encountered similar situations as the ones pictured above on a number of occasions (and as mentioned above I even have some other photos – hopefully I can track them down). What I have noticed is that the ‘host’ (assuming this is indeed a case of parasitism) is always an arthropod (a member of the large group of organisms that includes, insects, spiders and crustaceans, among others). Apart from various beetles (and beetle larvae), I have also found these mites on the back of woodlice (aka ‘sow bugs’ or ‘pill bugs’) – a type of terrestrial crustacean.

I have yet to see anything similar to this going on with the worms. Back when I was fairly new to vermicomposting, I certainly had my fair share of experiences with white mites coating my unhealthy or dead worms, but as I’ve written multiple times before, that is not parasitism or predation – those mites are scavengers and are simply taking advantage of a readily available (and nutritious) food source.

Anyway, I’d be interested to hear from others about this. Has anyone observed mites on the backs of various other critters in your worm bins?

BTW – if I ever did see mites that looked similar to those in these pics on the back of my worms I likely WOULD be a tad concerned. There are frequent reports of a reddish/brown parasitic mite that can invade worm beds and attack the worms. I don’t want people to get paranoid about this though. As is shown in the video (put together by Christy Ruffner) I recently posted on the blog, when there is a massive mite population explosion in your worm bin it can certainly look as though the mites are attacking the worms (since they are everywhere!), but it’s important not to jump to conclusions too quickly. If you set out melon pieces (as outlined in the video) and find them coated with the mites, you almost certainly have the regular brown worm bin mites.

In all honesty, I am still a wee bit skeptical that the parasitic ‘red mite’ issue prevalent as some have suggested. Seeing the concentrations of mites in Christy’s video (still gives me the shudders – haha) I can certainly see how some people would end up convinced that these mites are the ‘bad’ ones. Based on the background research I’ve done, my understanding is that the mites that are parasitic on earthworms are reportedly pretty rare.

That being said, I’m certainly still keeping an open mind about this! If anyone has some convincing shots with parasitic red mites on worms, DO let me know! I certainly won’t be shy about ‘eating crow’ on this one!
🙂