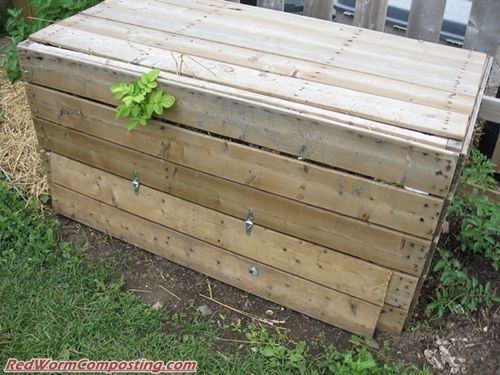 In the summer of 2006, just one year after we moved into our very first home (my current “suburban worm farm”), I decided to build myself a wooden compost bin. I’m sure to most people that will sound like a fairly normal, reasonable thing to do (assuming one has an interest in composting) – but I should explain that for ME this was a monumental undertaking! You see, while my grandfather probably could have built a house, blind-folded with one hand tied behind his back (and only tooth picks for nails!) – haha – this apple fell pretty far from that tree it seems (and ended up over in the compost heap)! To this day, I continue to look back in amazement – not only because I was able to build the bin but, perhaps even more importantly, that it has remained standing for close to 5 years!!

Unfortuntely, one of the downsides of not having a lot of DIY talent is that even when one DOES manage to build something, one typically does so in a rather haphazard manner, without any consideration for documentation and future reference. As such, the bad news is that I don’t have any sort of “plans”, and even if I did – you probably wouldn’t want to follow them! haha 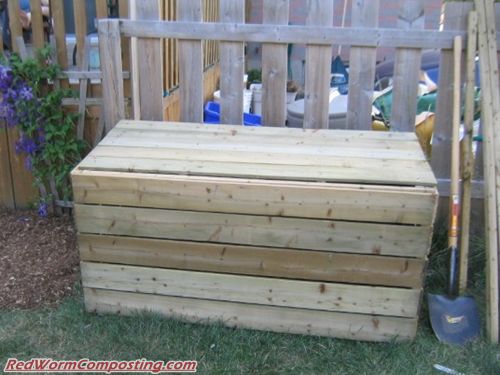 That being said, I do at least want to make an effort to provide some of the specifics for those who might be thinking of building something similar.

**IMPORTANT NOTE**: I’m rather embarrassed to admit it, but I should point out that I DID use “pressure-treated” lumber for this bin (gulp) – straight from the lumber yard. I was young and foolish – please forgive me! haha
These days I would certainly recommend using second-hand, or untreated wood (there are various ways you can protect wood yourself in a more enviro-friendly manner).

In case you are wondering about fasteners…

In hindsight, I probably should have used small wood screws to attach everything, but I simply used a LOT of small nails (probably about 100 more than were needed – haha!).

Some may also be wondering about the compost door at the bottom (in some images). While this was certainly on my mind when I built the bin, the fact is I didn’t want to push my luck, so I decided to build it without a door initially. As I’ll explain further down, a couple years later, with the help of my brother, I did end up installing a door (and thank goodness for that)!

I recently tracked down an article I wrote on a (now-defunct) website I’d started with a friend, called “EcoSherpa”. Here is a funny/interesting blurb that relates to the hole-in-the-ground images below:

I started with a simple hole in the ground, which I filled with old straw, cardboard, food waste and the contents of several worm bins I’d kept inside over the winter. My hole-in-the-ground served as my composter for several months (did I mention that I like to procrastinate?)… 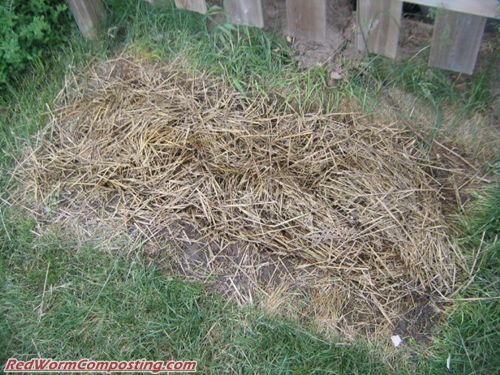 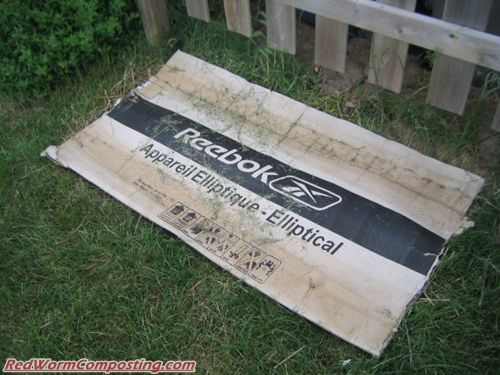 Ahhhhh – procrastination! Those were the days!
😆

Interestingly enough, this reveals that I was actually using a vermicomposting trench (without really thinking about it) a couple of years before I became a trench composting fanatic!

Joking and interesting observations aside, I should mention that creating some sort of pit down below your composter is a strategy I now recommend for those setting up new backyard systems. Not only does it provide you with a decent amount of extra volume, but it can also serve as a protective zone for the various critters in your compost bin ecosystem (including composting worms, if you happen to be using them). This helps with over-wintering in cold regions and hot summer conditions as well (not to mention when your bin goes “thermophilic” on you after adding too much material at once!).

Once I finally DID get the bin set up, I decided to add some cardboard. 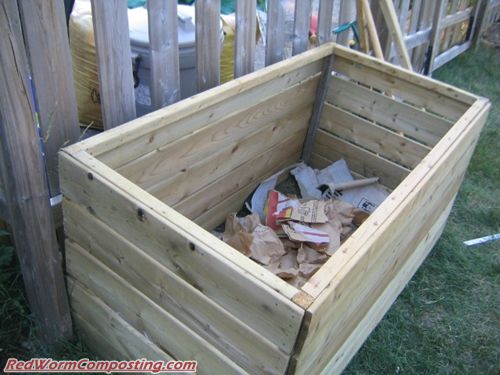 Believe it or not, within a day or two, I had managed to add most, if not ALL, of the material shown in the next image! 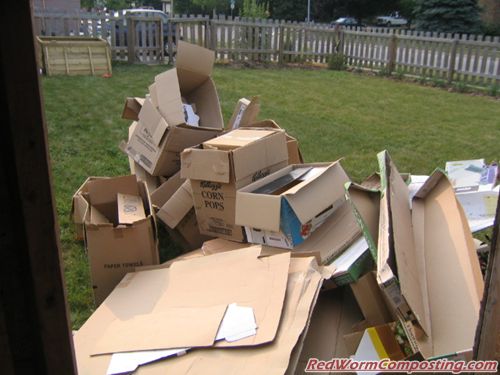 Yet another reminder of the fact that I had some time on my hands!
😆

There’s no denying the fact that my bin has served me (and my Red Worms) very well over the years! I certainly haven’t tracked the total amount of organic waste it has converted into compost, but I do know that a huge amount of material has gone into it – never to be seen again (wow, that sounded a lot darker than I intended it to! haha) – food waste, yard waste, straw, manure, fall leaves, jack-o-lanterns, dryer lint, bokashi bucket contents, vacuum bag contents, grass clippings, cardboard, shredded paper…and likely some other things I just can’t remember!

I even attempted to convert the system into a winter composting system! For my very first “Winter Composting Extravaganza” I created make-shift insulation walls using garbage bags stuffed with old plastic shopping bags etc (and covered the bin with a tarp). 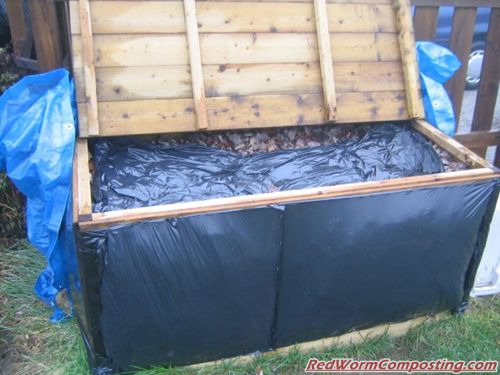 It kinda felt like I was “recycling”, and it certainly helped to keep in some of the microbial heat being generated, but alas it did not work out quite as well as anticipated, and I ended up burying the whole thing in snow before the end of the winter so as to make sure the worms didn’t freeze solid.

The following winter, I got a bit more serious about the project and created an actual insulation wall using some scrap lumber, flattened cardboard boxes, and some old insulation that had been sitting in my dad’s basement (the cardboard was used to sandwich the insulation in between the outer frame and the composter). 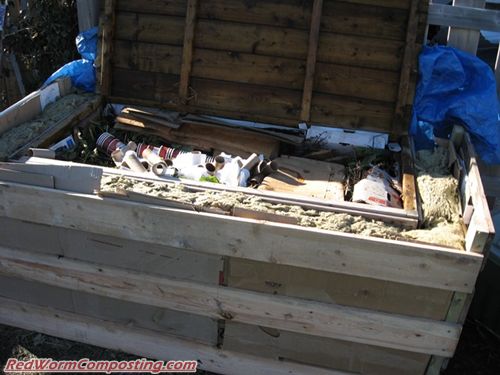 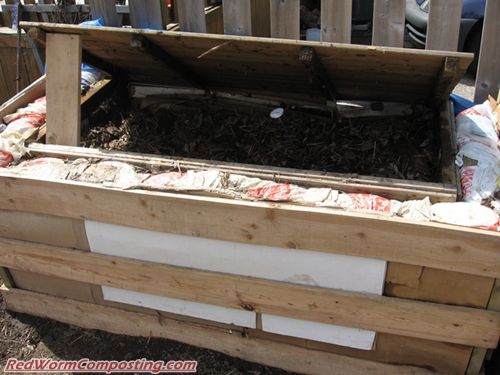 This approached proved to be a lot more promising, but unfortunately we ended up leaving for an extended trip towards the end of the winter, so I decided to once again bury the whole thing as a precautionary measure.

If you want to learn more about my early winter composting efforts, be sure to check out my “Winter Composting Page” (on the Compost Guy website)

In early summer of 2008, I decided it was finally time to install a compost-access-door on the front of the bin! Even though I had set the system up nearly two years before, I had yet to remove any compost from it!!

This time around, I enlisted the help of my older brother. I won’t claim that he’s a DIY-master by any means, but he’s probably a bit more proficient with tools than I am, and there is just something about having other non-DIYers lend a hand that serves to boost your builder’s confidence! We even made a bit of a backyard BBQ party out of it! 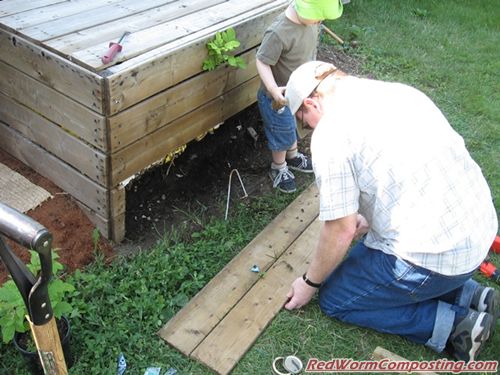 Creating the door was actually quite easy. We simply cut two of the front boards out, close to where they were nailed to the frame, then attached a few small pieces of left-over 2×2’s and a couple of metal hinges.

Installing the new door was pretty cool, but I must say that seeing all that beautiful, dark vermicompost down at the bottom was amazing!! Needless to say, I’ve been putting a lot of that material to good use ever since! 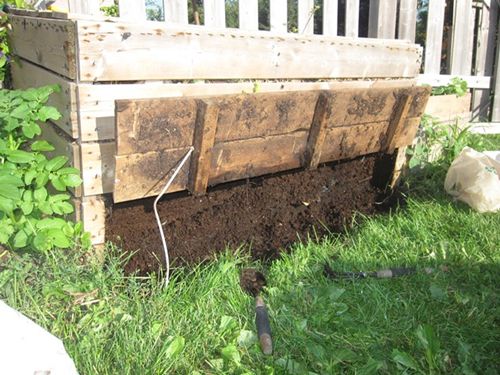 Builder’s Note
Those of you who are pretty handy might want to consider adding some sort of raised grate floor to a bin like this. That way you will easily be able to access a lot more vermicompost, and you will have yourself a nice little flow-through system!

Ok, here’s one last pic for the road! In the fall of 2006 I added a LOT of tomato waste to the bin. As a result of this, during the following growing season a LOT of tomato plants popped up in and around the bin.

Me being me, I decided to let a bunch of them grow!
8) 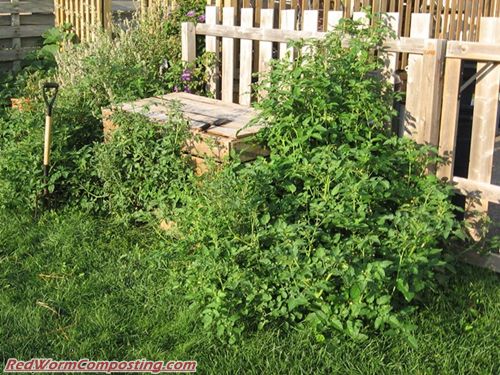 Do Composting Worms Pose a Threat as Invasive Species?