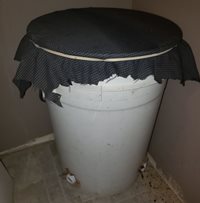 Back at the end of October, I posted an update for my breathable bucket vermicomposting system (see “Breathable Bucket Bin – 10-31-19“) – making it very clear just how impressed I was with it.

We shall see how things look in a couple of months, but my inner optimist has me thinking this may very well end up being my new go-to DIY indoor system approach (sorry, Roughneck Totes).

In the meantime, my plan is to set up a mini fleet of these things so I can really put them to the test!
😎

This morning I decided to set up breathable bucket #2 using a 20 L pail (~ 5.3 gal – somewhat larger than my first one). 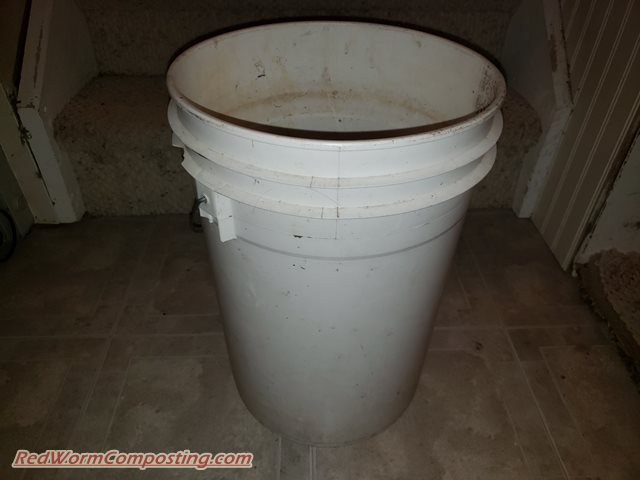 This time around (and more than likely from here on out), I added 4 vents. Initially the plan was to use 4 pop bottle tops I had ready to go, but I wasn’t happy with how loose they were, and opted to try some other caps instead. 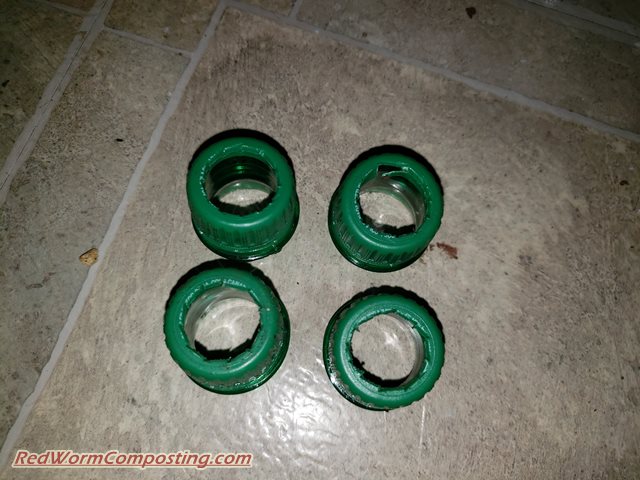 Thanks very much to Frederick F. for giving me the idea (via a comment under my original Breathable Bucket YouTube video) to try caps from juice/milk (etc) cartons! Not only do we have these sorts of containers in the house far more often than pop bottles, but they are actually much easier to cut out and prep for use as vents. 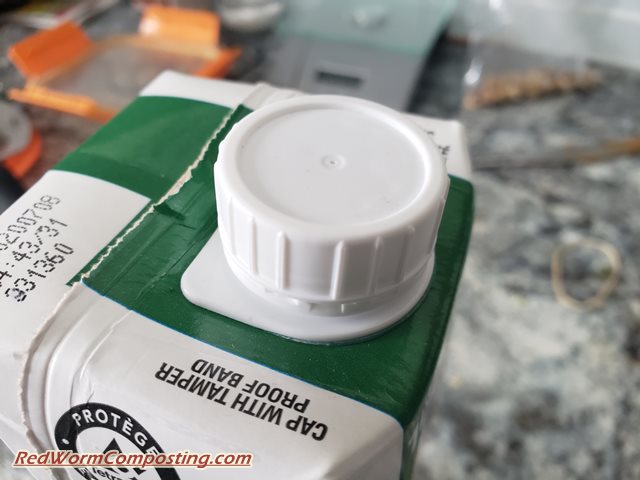 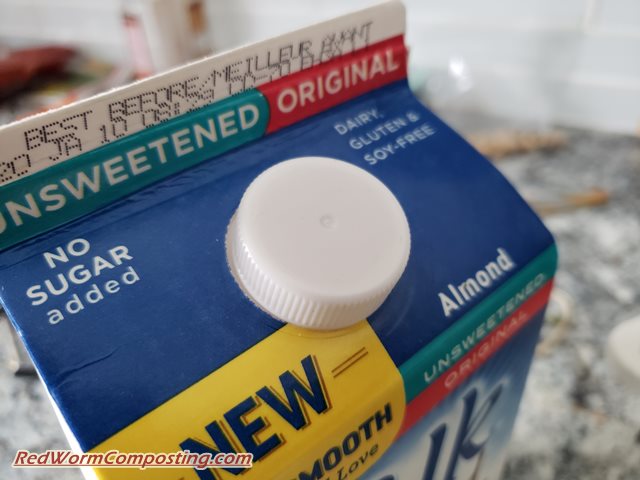 NOTE: one of my vents this time came from a lemon juice bottle – it was similar to the pop bottle caps but ended up tightening really nicely against the bucket.

As for hole cutting…

Once again I used my trusty 1″ hole cutting bit. For my first hole I decided to try pushing the drill very slowly – but realized this was NOT the right approach! lol 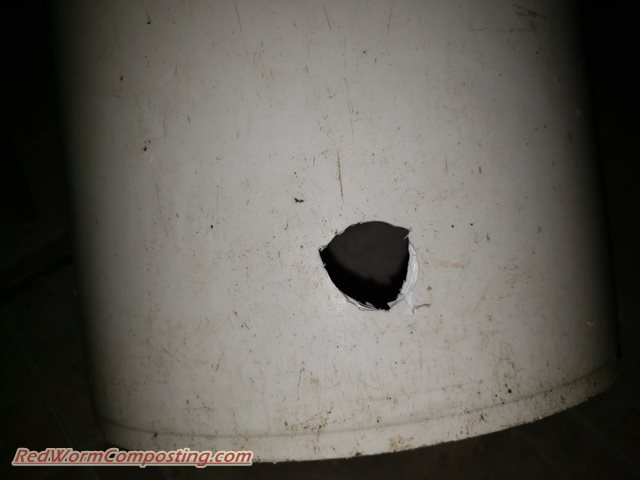 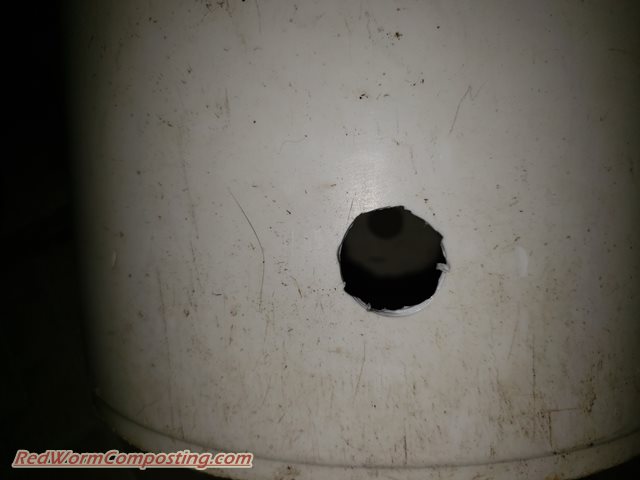 All in all, I was very happy with the vents – they were all flat against the inner wall of the bucket, and I was able to tighten them up nicely on the other side. I won’t claim they were perfectly lined up, but the key is that I have 4 of them – so even better air flow than in my first bucket system! 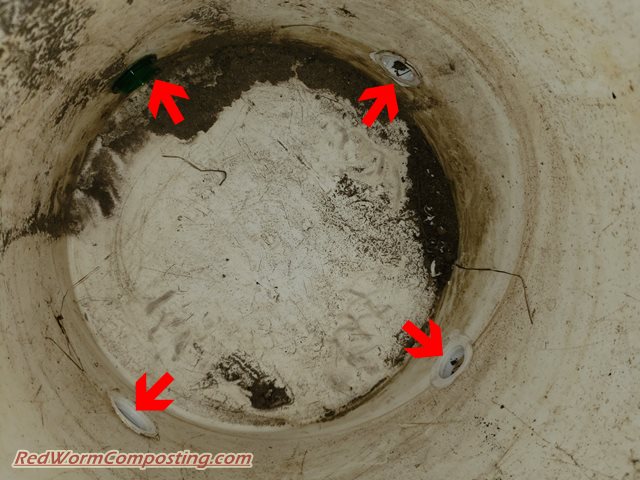 Once the bucket was ready to go, it was time to create my false bottom. Like last time, I loaded up the bottom with (dry) bulky pieces of hand-ripped corrugated cardboard. I brought the level of this material up well past the vents. 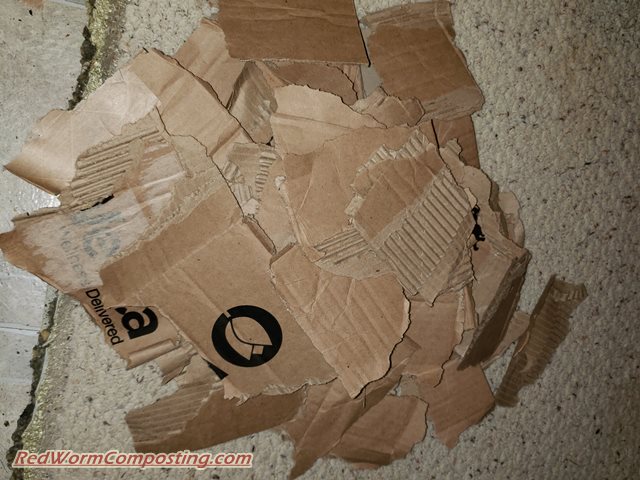 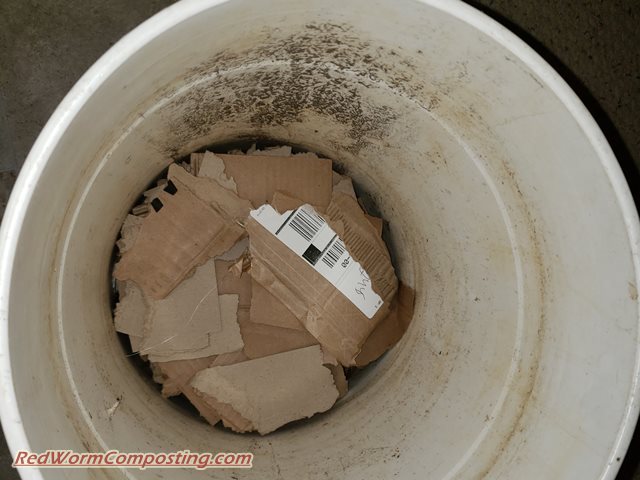 Next, I added a thick layer of dry, shredded newsprint. 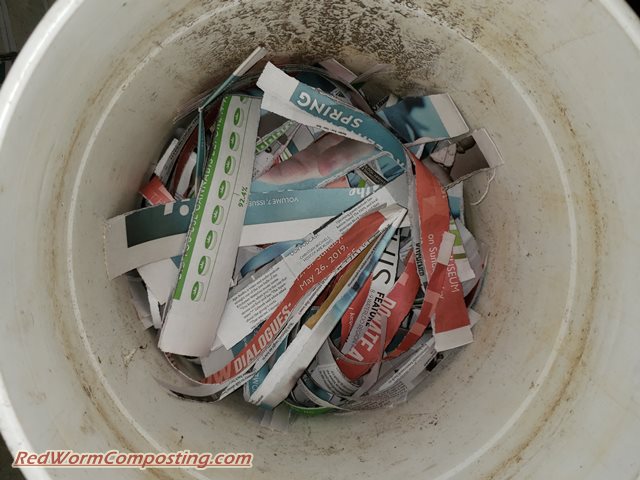 Last week, I managed to get one last lawn cutting in with a thick layer of fall leaves on the ground – leaving me with a large quantity of beautifully mulched leaves mixed with clippings. This material is definitely going to come in handy for setting up new systems during the winter. It offers both food and habitat value – and no doubt is fairly well-inoculated with microbes as well, thus offering some of the same benefits as “living materials“. 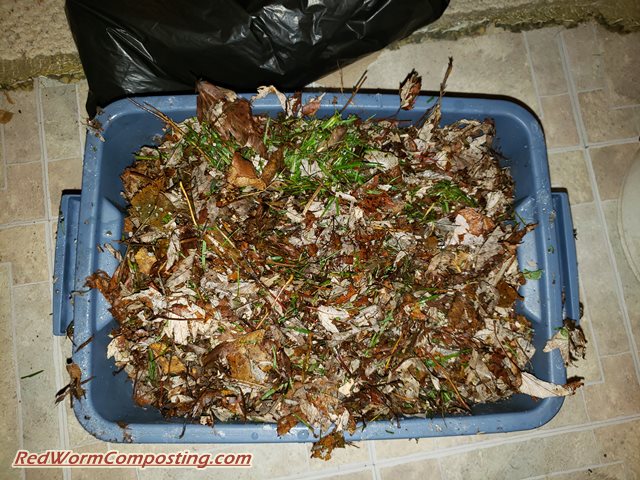 I added layer of this mix over top of the shredded newsprint. 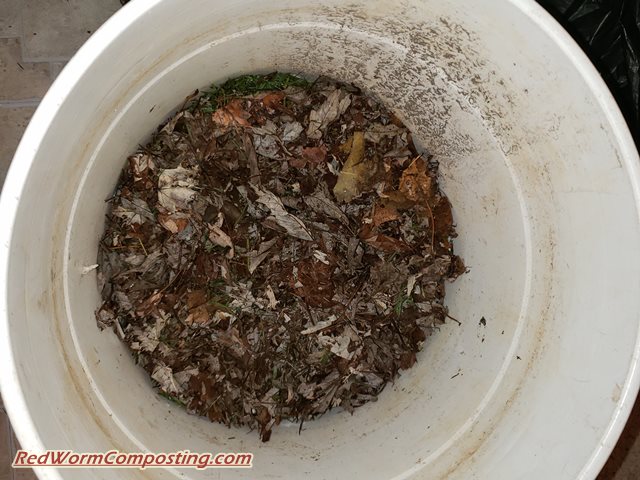 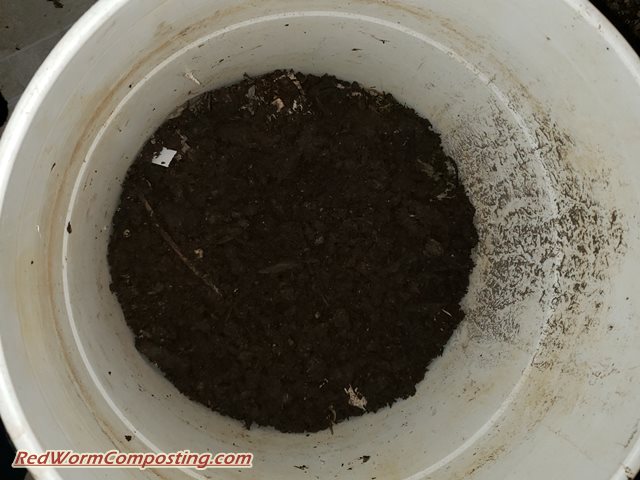 …before adding a very small culture of worms. These worms came from a “Tiny Tub” system that was set up not quite 3 weeks ago. The little system had been started with 20 “breeder” Red worms – and a very quick assessment seemed to indicate that there were at least 50 cocoons (more likely 70 or 80), and a small number of hatchlings as well.

This probably doesn’t sound like “enough” Red Worms to start up a vermicomposting system, but you might be surprised by just how fast a population like this can grow!

It will be fun to see how things progress from here.
😎 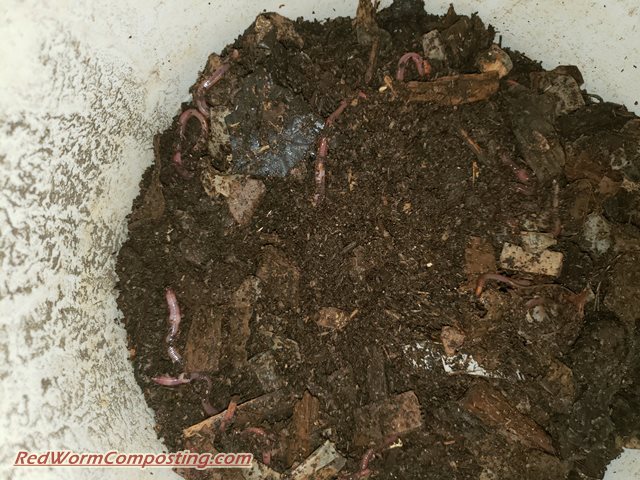 Over top of the worm zone I added another layer of the mulched leaves with clippings, and a thin layer of shredded newsprint. 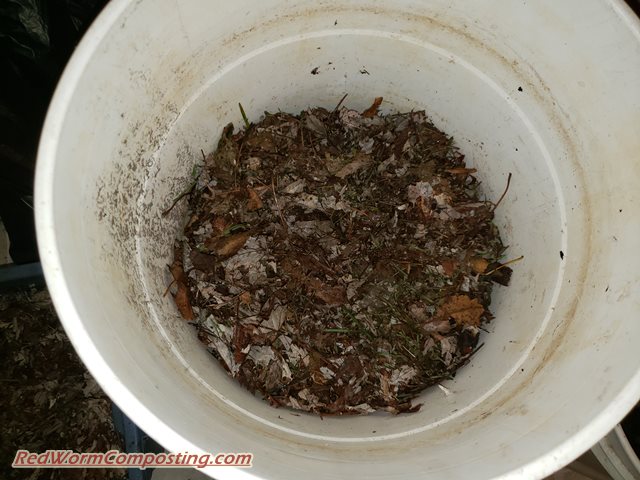 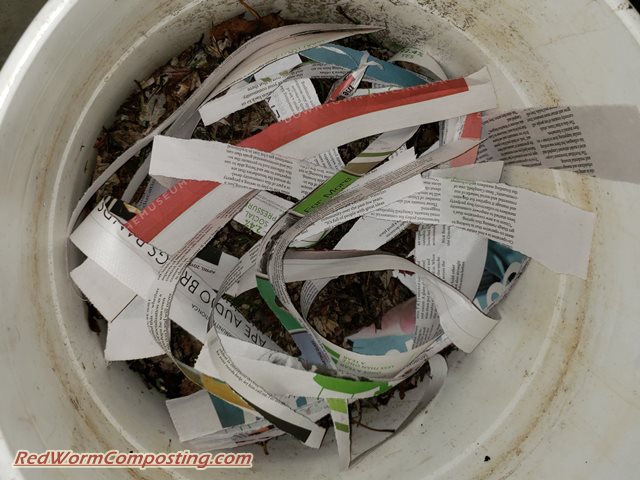 These layers were intended as a bit of a separator between the worms and the actual food deposit.

Speaking of which, once again (same as when I set up first bucket) I didn’t happen to have any of my usual frozen-then-thawed kitchen scraps on hand so I had to raid the scrap collection bin I keep under my sink. 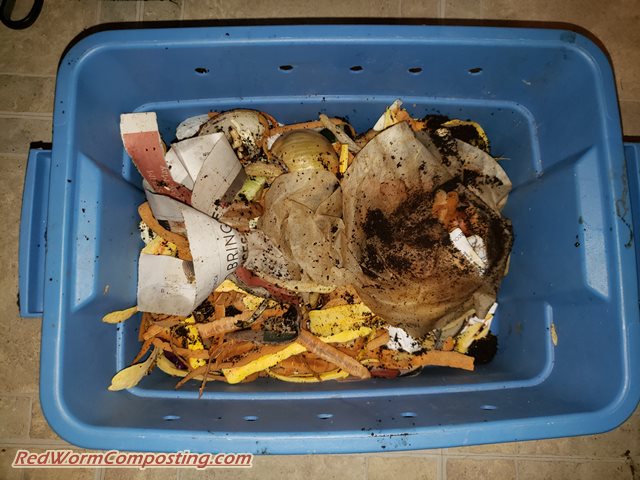 I added maybe 1 or 2 pounds of these scraps to the bucket. 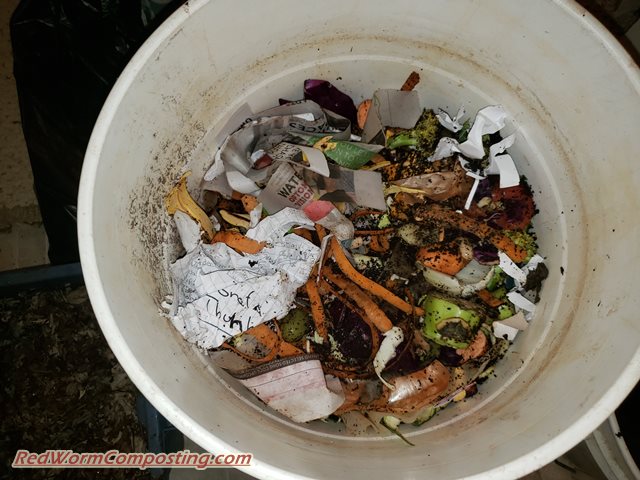 Some of these materials – eg. fresh carrot and broccoli cuttings – are not going to break down very quickly at all. They may even start to grow initially (one of the advantages of freezing is that you kill the plant tissues, making it much easier for microbes to invade).

This doesn’t concern me at all – it may actually end up being helpful since it should give the worm population a bit more time to grow – and there is still plenty of available nutrition in there. 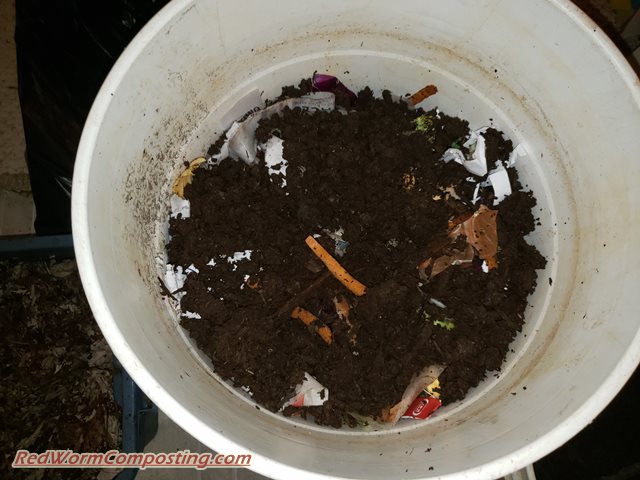 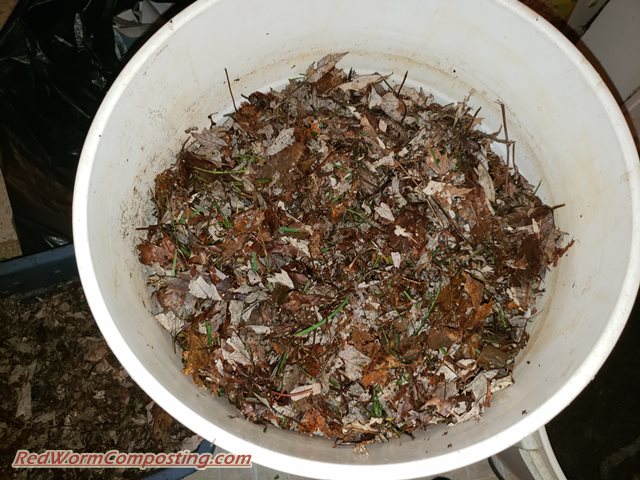 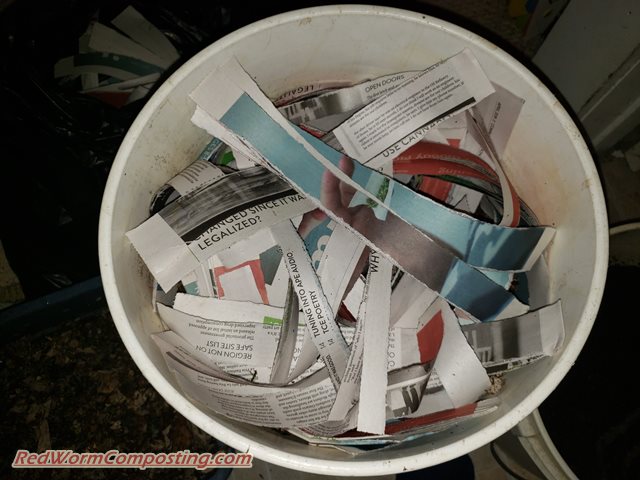 Once again, I used some fabric from an old work shirt as my lid – secured with an elastic band. 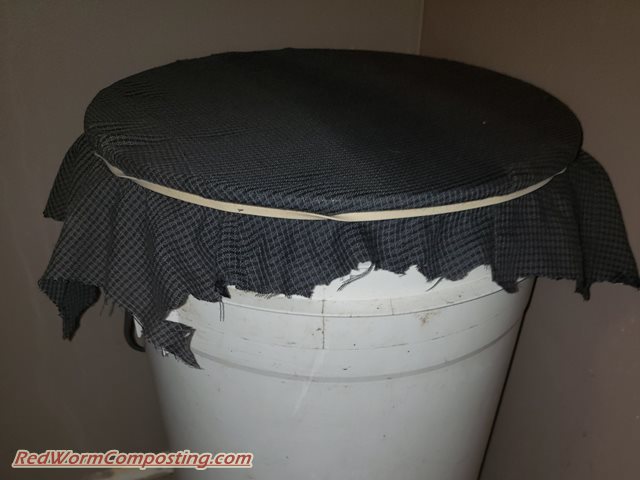 One important thing to mention about the leaves/clippings mix – I did the cutting with the mower raised higher than it would normally be. The idea was to harvest/mulch a lot more leaves than grass (but to get some in there for increased food value). Although the comfrey (another green waste) seems to be working very well in my other bucket bin, I always recommend being very cautious with these sorts of materials. The small proportion of clippings in my mix, and the addition of living material should help to ensure that there won’t be any issues with ammonia release (harming/killing worms).

I will likely just leave this bin to sit (taking up very little room in the corner of my basement bathroom!) for 2 to 3 weeks before even bothering to check on it.

Let’s get some more of these systems going in the meantime!
😎

P.S. In case you are wondering, from start to finish this newest bucket took less than 30 minutes to get up and running (including vent installation)!