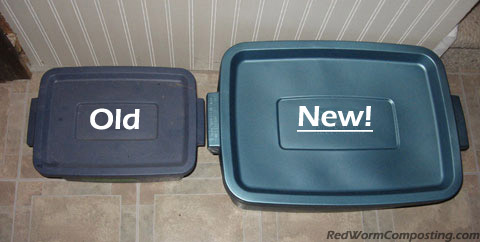 One of my European Nightcrawler (Eisenia hortensis) bins got an upgrade this mornning (the one with the most worms in it). I’ve read that these worms prefer a little more space than their red wiggly cousins (ie. Eisenia fetida) and have been feeling a little guilty that I forced them to live in pretty well the smallest Rubbermaid tub on the earth! (although, they’ve done very well considering). As you can see in the picture above, the worms got a decent upgrade.
8) 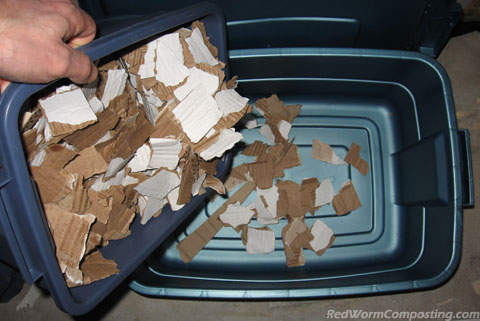 All of this actually started when I was out doing some shopping on the weekend prior to New Years. I came across a sale on Rubbermaid tubs at a department store and couldn’t resist picking one up. The bin is pretty well the ultimate tub for worm composting (better than any Rubbermaid I’ve encountered before). It has a nice large surface area, yet is not very deep.

Once I got the bin home I started prepping it for its future tenants. I first lined the bottom with shredded corrugated cardboard – this provides a ‘false bottom’ and helps to soak up excess moisture. 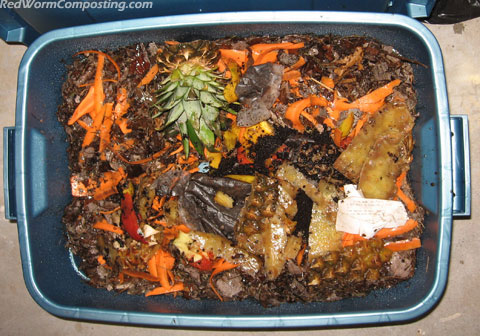 I then added lots of the mulched leaves/grass mix I made in the fall (by attaching a bag to my mulching lawn mower then running over some leaves) and a huge quantity of holiday food scraps (fruit/veg/coffee). I covered it up with one final layer of the mulch, added some water then closed it up and let it sit for about a week. Last night I opened it up and sprayed it down thoroughly, making sure there weren’t any dry spots left (it can be a little challenging to evenly moisten dried leaves/grass). 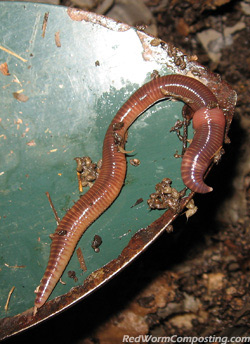 When I dumped out the contents of the smaller bin I was very happy to see many fat (seemingly healthy) Euros living throughout the mass of material inside – always a good sign.

Some of them were as big as small dew worms (Canadian Nightcrawlers – Lumbricus terrestris), so I can certainly see how they would make a great fishing worm.

I was greeted with only a slight whiff of anaerobic digestion as I dumped out the small bin, and was pretty impressed that there seemed to be no water pooling in the bottom. My other small Euro bin (the double-decker ‘deluxe’ model) hasn’t leaked a single drop of liquid down into the reservoir either, so it certainly isn’t too wet in that bin either. In fact, it’s probably not a bad idea to start adding more water to that one since E. hortensis is thought to appreciate high moisture conditions a little more than Red Worms (who love it wet!) – I can’t really go wrong with the drainage holes in the bottom, so I might as well crank up the moisture levels. 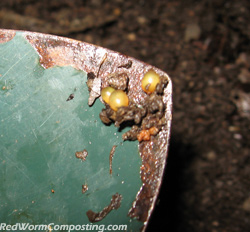 I was also very happy to spot a lot more Euro cocoons as I broke up the material from the old bin. They are all very light in colour so it may be a little while before we see young worms (worm cocoons become quite dark just before the babies hatch out), but I’ll certainly be keeping close tabs on that development.

I have a sneaking suspicion that the new digs will inspire the worms to go a little ‘hog-wild’ in the reproduction department, since there is now plenty of room to spread out, and plenty of food available. 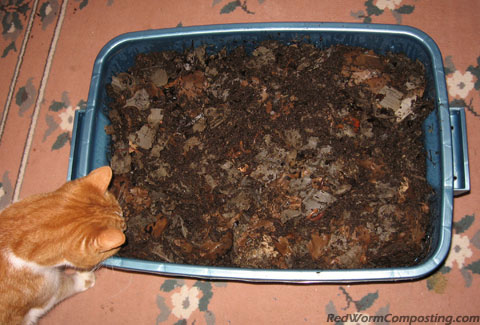 With one final inspection from Monty (our cat), the bin was ready to be closed up and left alone. One thing I forgot to mention (not indicated in any of the pictures above) is that I also drilled a bunch of holes in the lid and along the sides (near the top) to encourage air flow inside the bin. I haven’t bothered to do so with some of my previous small indoor worm bins, but since drilling them in my demo bins (used in the videos) I’ve become a convert. You are far less likely to stress out your worms if there is a decent air flow in and out of the bin – just make sure it’s not so well aerated that everything dries out!