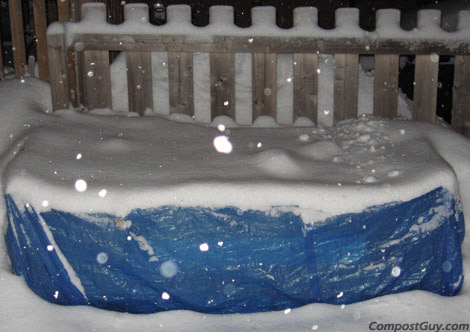 Back at the end of September (wow, time sure does fly by!) I talked about getting my outdoor worm composting bin ready for winter (see Preparation for Winter Worm Composting). As mentioned, this year I am once again attempting to keep an outdoor bin active all winter long. Last year I had to call it quits in February once I realized I was fighting a losing battle against ‘Old Man Winter’. To ensure that my entire bin did not freeze solid, I simply heaped a huge amount of snow over top, effectively burying it until early spring.

Last year I wrote about the ‘Winter Composting Extravaganza’ (my silly name for the project) on the EcoSherpa blog, but as mentioned not too long ago, the series has been moved to CompostGuy.com in an effort to get the ball rolling over there.

So far this season the results have been nothing short of amazing. The winter weather in November and December this year was far more severe than last year (we didn’t really get a winter until January), but the new insulation system seems to have risen to the challenge! The picture above was taken on New Years morning (yes, I am indeed a composting lunatic). As it says in the caption, temperature readings inside the bin were in the 20 C range, despite the fact that we were in the middle of a serious winter storm. The next couple of days saw outdoor air temperatures plummet to -20 C (-4 F) or so, yet conditions in the bin remained unaffected for the most part (slight drop in temperature, but certainly nothing significant).

The Red Wiggler (Eisenia fetida) population seems to be thriving inside the bin. I found lots of juvenile worms along with numerous cocoons when I dug around inside recently.

We are now into an unusual warm spell (temperatures above freezing) so the snow is melting away, but I have little doubt that there will be plenty more cold weather before too long.

For links to all the winter composting blog posts and information about the topic in general, be sure to check out the Winter Composting page (at CompostGuy.com).

I’ll likely provide at least one more update here to keep everyone up to speed, but you are more than welcome to follow-along over at Compost Guy as well.