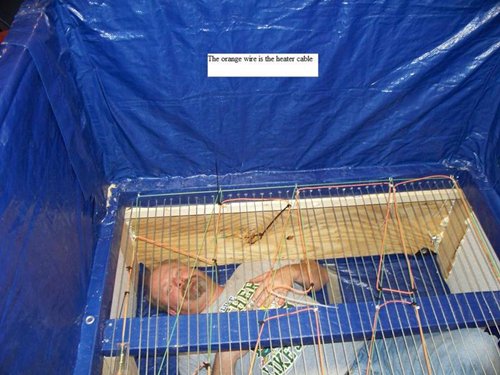 Who says a worm bed is just for worms? Mark takes a break beneath his newly constructed OSCR worm bin

One of the really cool things about building this website is that it has allowed me to connect with lots of people thinking about getting into vermicomposting and then helping to nudge them further in that direction. It is especially gratifying to receive emails from some of these folks weeks and months later, telling me about all the cool vermicomposting projects they have on the go etc.

My vermi-friend Mark (aka “Mark from Kansas’) is certainly a PRIME example of what I’m talking about! He bought worms from me back in February (and again in March), and is definitely someone who has taken to vermicomposting like a fish to water! In all honesty, Mark’s email updates have inspired me so much I’ve almost resorted to begging him to become a RWC correspondent.
😆

Well, all my whining and pleading seems to have paid off (haha), and I am very pleased to be able to share Mark’s first ‘official’ post here today – focused specifically on his new OSCR (Oregon Soil Corporation Reactor) worm composting system.

Included here is a bit of a background story, Mark’s OSCR-building journal entries, and a gallery of pictures taken during the set-up process. Each photo has it’s own caption, but you may have to look closely to read them since I needed to shrink the images so they’d fit in the post.

I like to experiment with the whole vermicompost concept. I have had a lot of success vermicomposting so far. The Rubbermaid bin seemed like too much labor to harvest and maintain. I had, at one time, 4 Rubbermaid bins and one 55 gallon drum (cut length wise) in my garage. They were in the garage for four seasons and all of them prospered. For 12 months I fed them all kinds of things just to see what would happen and made a list of what they would eat. To make a long story short, I had 5 bins with different foods different moisture content, or different temperatures. If I killed some I would not kill them all.

The vermicompost I did harvest was great for our plants. Some plants grew well in sand and other plants did well in what was mostly gravel. My wife used some VC on her tomato plants and from casual observation, they were bug and disease free. She was very pleased with her small crop and received several compliments on the taste and juiciness.

So, I finally decided to lay all my cards on the table. I have read volumes of research and spent more money than I wanted to. Living in Kansas, I have an unlimited amount of manure and coffee grounds. I keep track of how many pounds of coffee grounds I get from the gas station and put up a sign in the store stating how much the store has recycled. The sign is a public awareness tool. They sell more coffee by going green and I get the coffee grounds.

My goal for this year is to reduce the bin input by 90%. I am trying to reduce 1 ton of trash into 200 pounds of high quality VC. I send samples to K-State University for nutrient contents, N P K. Some of the previous values varied greatly and now I think I have a good mix of food to balance out the values. It is my understanding that N P K are non renewable resources, they have to be mined or made from fossil fuels. I make them in my garage.

The guy I get my horse manure from wants to go completely organic in his huge garden. I think it is a fair to trade manure for VC for him to till in his garden, I’ll let him do the growth trials on a large scale, that will free me up to do more research.

I chose the OSCR bin type to meet my needs. Less labor and more time to observe and record.

It does have a forty watt heater cable in it that – based on an electric consumption calculator – will cost me 10 cents a month. I have been criticized for leaving a “carbon footprint” and using electric to heat it wasn’t pure vermicomposting. Personally, I think we are in a natural resource and pollution crisis. Time has run out a long time ago to start doing something now, if I have to maintain my bin with electric, then I have to. If all my worms die, I have no worms to vermicompost and have to spend even more money.

So from the bottom: steel cable, a layer of news paper (2-4 sheets thick), the harvested VC that include cocoons, and the main body of the heater cable.

I want the “finished” VC at the bottom so the heat will hatch the cocoons. The bulk of the food at the top will drive them upward.

*[Editor’s Note: I emailed Mark to see what he meant by “Bentley Bin”, and here is what he said (I have linked to the video he refers to as well): “Bentley Bin is the Rubbermaid bin you made in your video. The first one I used and had success with. I was so thrilled with the simple bin, that I just call it a “Bentley Bin” because I built it from your website. I guess I am just a fan.“]

I’ll have to wait for at least a week for the temp to go up to70 degrees. The wait period will also stabilize the contents, once stabilized I’ll add the worms.

Temperatures vary from zone to zone. The temp is 56 degrees within a 20 inch radius from the center, at a depth of 4 inches. The left side of the bin had temps in the mid 60s.

I sprayed down the top with 1 gallon of water. The moisture meter was reading 20%.

Temps rising in various zones. I closed the harvest door and have a temp 8 degrees above ambient.

Added 8 pounds of horse manure. The surface seemed like it had to much coffee grounds.

Temps holding steady from 68 degrees on the right and 76 degrees on the left. Right side seems to be the cooler zone with the middle being the warmest. Moisture readings about 40 -50%

I went ahead and added my small holding bin of worms and unfinished VC 24 lbs.

The small bin was running a little dry so, in they went. I estimate 6 lbs. of worms.

I also watered it down with ½ gallon of water.

I have pot worms crawling up the sides.

Added 4oz of bread to the right side.

I went ahead and added the other holding bin 43 lbs. of worms and unfinished VC. 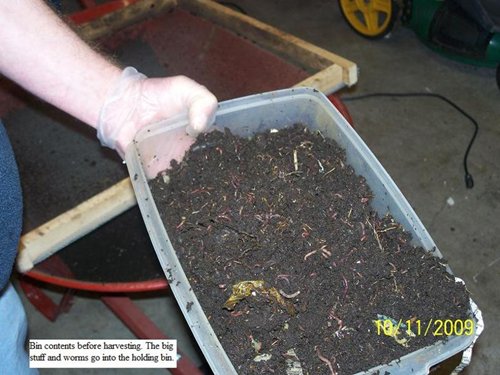 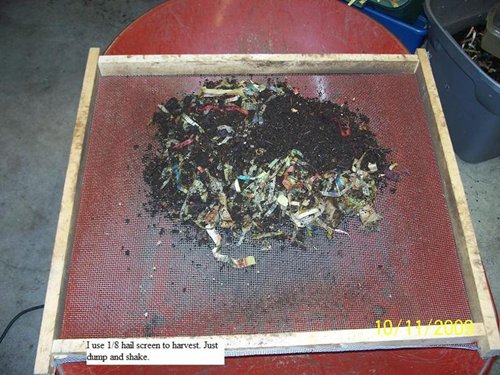 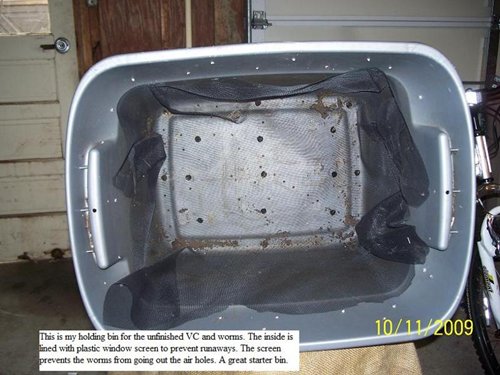 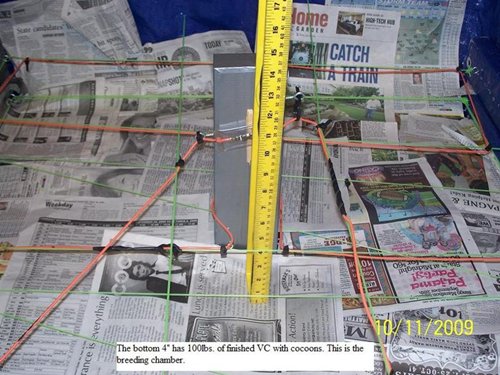 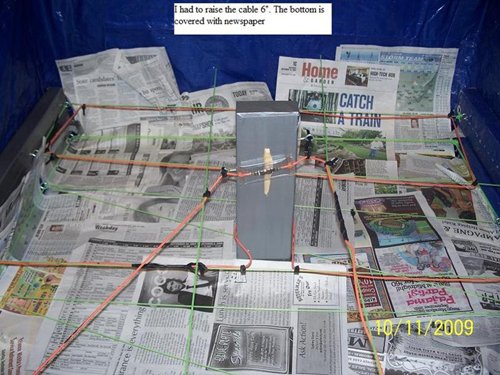 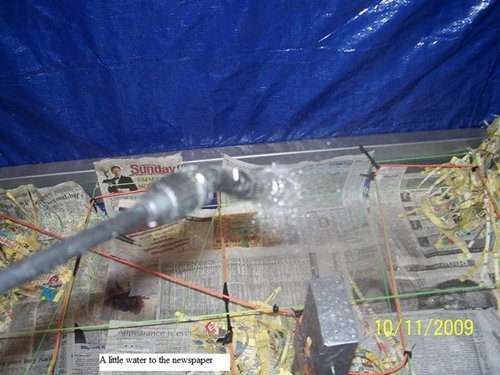 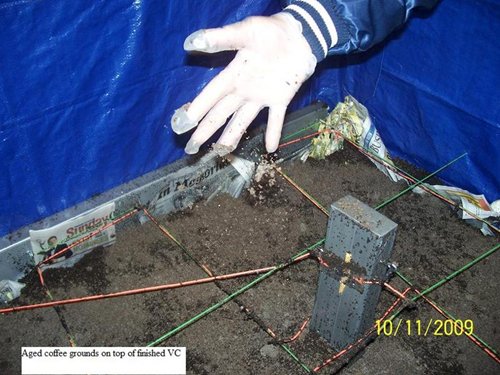 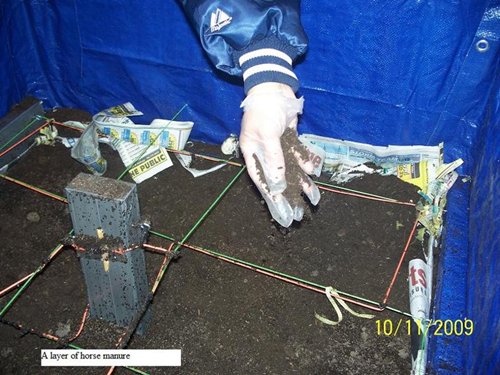 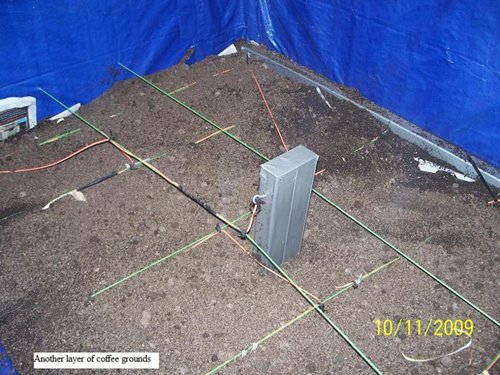 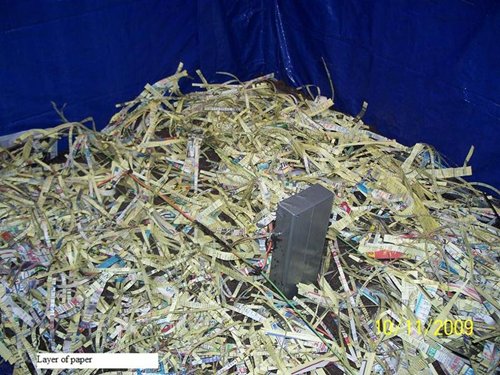 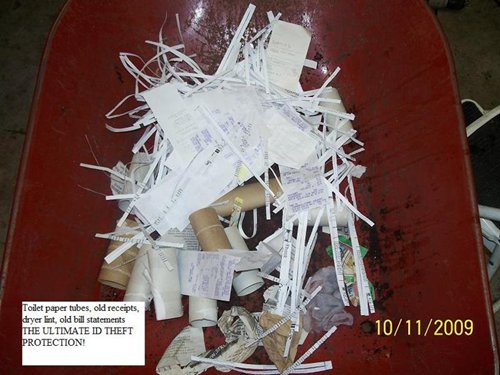 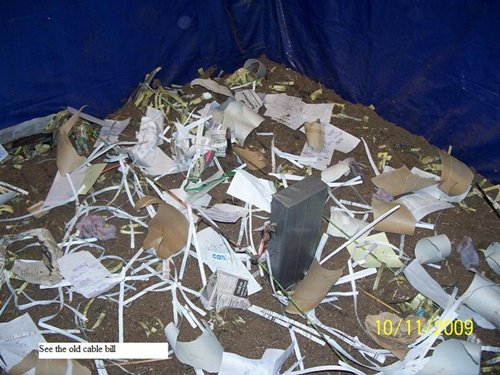 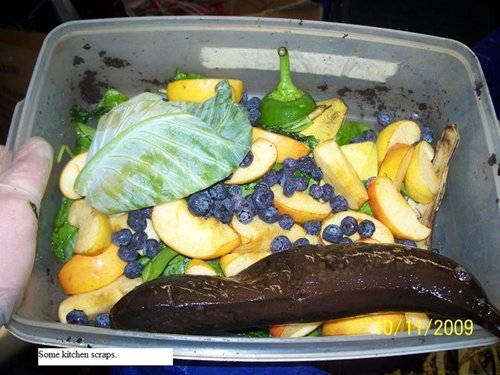 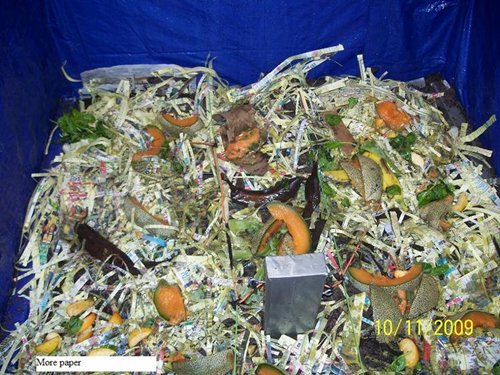 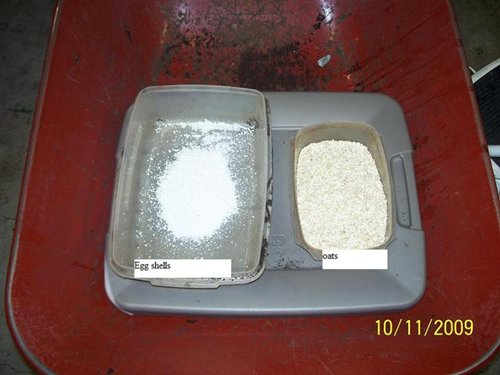 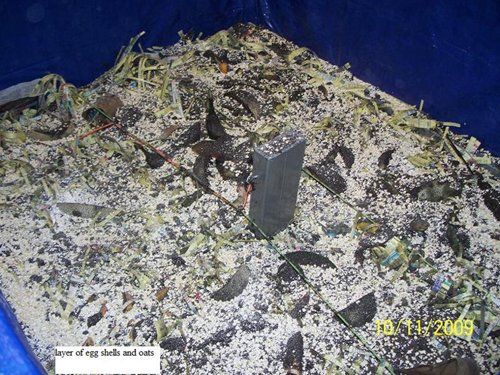 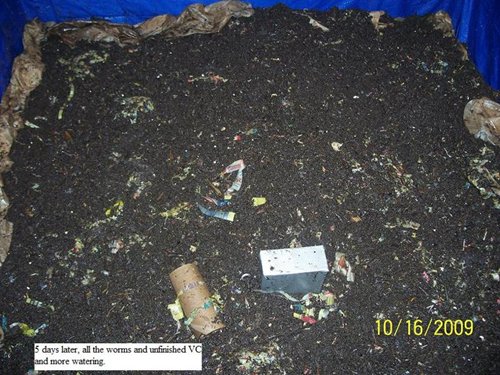 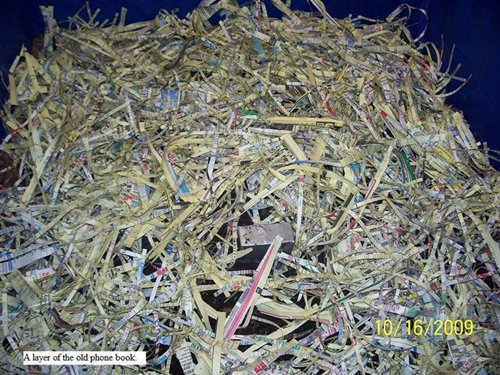 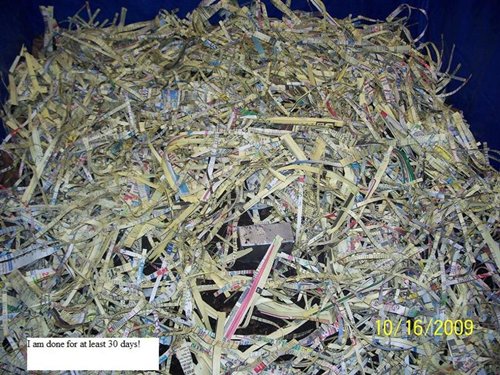 Let me wrap this up by sending out a big thanks to Mark for taking the time to document his OSCR building experience (and of course for sharing it with us). Hopefully he will be able to provide us with updates as the bin (and his vermicomposting adventure in general) progresses!

If you have any questions or comments for Mark please be sure to add them below!
8)