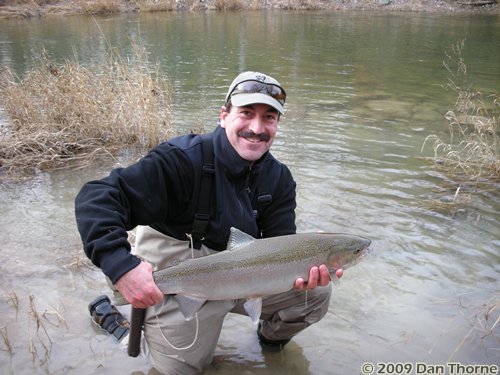 Dan Thorne, with a beautiful Ontario Steelhead (released after the photo was taken)

At the risk of horrifying my loyal worm-lovers (haha), I thought it might be interesting to offer something a little different here on the blog. This was inspired by a recent email exchange with Dan Thorne, one of my local (Ontario, Canada) customers, who just so happens to be an avid fisherman.

As much as I now love my worms, I still definitely have a serious soft spot for the live food folks and the fishing fanatics – after all, my fascination with Red Worms started well before I really knew anything about vermicomposting. I used to be an avid aquarium hobbyist and diehard angler (I still wet a line every now and again – but am definitely not much of a bait fisherman anymore).

I can still vividly remember one of the real ‘turning points’ for me prior to my first introduction to a worm compost bin. I was watching my favorite childhood fishing show – ‘Real Fishing with Bob Izumi’ – and Bob was fishing for Steelhead (large migratory Rainbow Trout) on a tiny creek here in Ontario. As you might guess, his bait of choice that day happened to be Red Wigglers. Well, long story short, he was ended up pulling these monster fish out one after the other – I was completely floored! Steelhead can be a challenge to catch at the best of times, let alone on a teeny tiny, crystal clear creek. There obviously had to be something special about these worms! (little did I know at the time JUST how special they were!)
8)

What’s really cool is that Dan was actually a guest on Bob Izumi’s show at one time (although not on the episode mentioned above), and also knows just how effective these worms can be for catching Steelhead. He recently shared with me a little story about one of his Red Worm fishing days (along with some additional fishing wisdom) and I requested permission to post it here. Dan kindly agreed, and even sent me the great photo above (thanks again, Dan!).

I was fishing an opening day in late April on a very crowded river that held a large number of 5-10 pound Steelhead (migratory Rainbow Trout). The water was gin clear and the fish were extremely weary refusing all regular offerings of various colored spawn sacs, spoons and lures and even big dew worms. Luckily I had the foresight that morning to pack a couple dozen red wigglers adding to my arsenal with the hope of offering something different than everyone else.

I arrived early that morning to find more fisherman than I’ve ever seen at this particular spot, in fact some were actually camped overnight in order to secure a good spot to fish at sunrise. The water was ultra clear and I knew this would be one of those challenging days where the fish would be hunkered down with feeding as the last thing on their minds. I downsized my complete presentation in order to offer my bait in the most natural way possible. My first 10 drifts were made with the typical baits as used by the fisherman who now lined both sides of the river with no strikes…there’s no doubt these fish were spooked.

I single hooked a red wiggler on a small #12 hook, and half way through my first drift my float disappeared and I found myself fighting a beautiful 8 pound Steelhead in front of everyone who had to quickly pull their lines in allowing me to fight this aggressive brute. Some thought I foul hooked it since they didn’t seem to be biting anything….but I knew better! To make a long story short, I continued hooking one after another until I finally ran out of worms my mid-morning but not before landing and releasing another 10 or so beautiful chrome fish, not to mention the ones I battled and lost.

Don’t get me wrong, these worms are not the end all but through experience I know they have produced fish when other baits haven’t. I strongly believe they will hit the smaller worms purely based on natural instinct. Steelhead spend their first 2-3 years of life in the river before venturing out into the lakes, only to return every year thereafter to spawn. During these early years of growth they become accustomed to only feeding on natural food sources which include small worms that get washed into the river after rainfalls. I don’t think big dew worms are as common as the smaller worms, thus my reasoning for raising them and having them on hand for just the right occasion.

This was definitely not an isolated incident as there have been many occasions I have nestled in between unsuccessful anglers and immediately hooked fish. When they ask what in God’s name am I using I simply reply “worms” with no description and then move on.