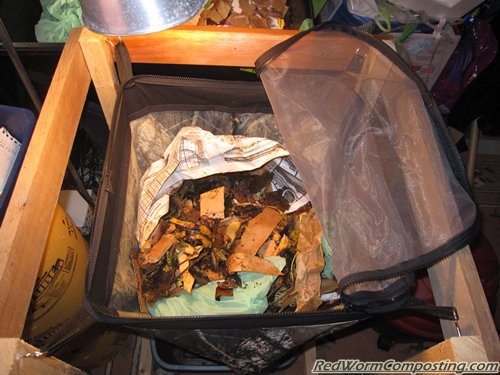 My Worm Inn Pro, as viewed from above

Well, it’s been a little while since my last Worm Inn Pro update. Certainly a few things to report on there. As you may recall, in my typical over-confident (a.k.a. “dumb”) manner I decided that I was basically going to overfeed this system even though I only started it with a couple bags of ‘compost ecosystem’ mix (i.e. no gobs of worms). I assumed (like a typical dummy) that given all the fantastic air flow, along with the healthy amount of shredded cardboard I’ve been adding, I could get away with anything, just shy of pouring in rat poison!
😉

Luckily, before too long I realized that this foolhardy approach wasn’t the best way to go – for the first time ever I actually ended up with leachate coming out of the bottom of a Worm Inn, and there was a fair amount of stinky anaerobic stuff going on with all the food waste I had added. As such, I cut back on my proposed feeding schedule, and have only added food once or twice since then.

What’s really cool is the fact that despite all this, the system has still remained relatively odorless (and trust me, I’d hear about it if one of my systems start to stink – especially given the fact that my Worm Inn is sitting in our laundry room). When I dig down into it with my trusty hand fork I definitely get some less-than-pleasant odors wafting up (due to all the anaerobic pockets I am disturbing), but I’m certainly not dealing with the kind of catastrophy that would almost certainly be occurring if I was doing this in an enclosed plastic tub.

I should also mention that the worms are doing very well. Now when I dig around I am seeing a lot more worms (large and small), so the population is clearly doing just fine despite my best efforts to be a bad caregiver! 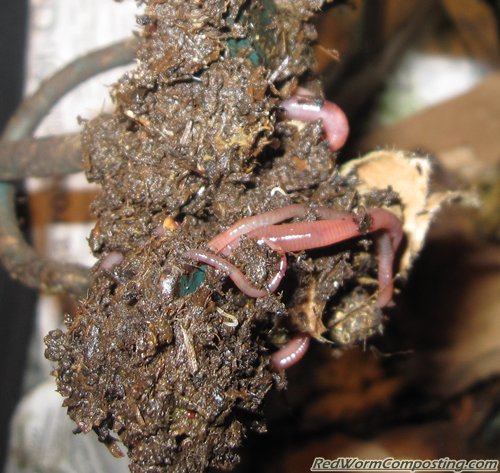 Interestingly enough (yet not surprising at all) some other critters have made their presence known in a BIG WAY, basically taking advantage of the relatively low competition environment. This is actually kind of cool since I wrote about this sort of thing not too long ago in the newsletter, and my last blog post also dealt with a couple of these organisms.

I think I already mentioned there being lots of springtails, but for the first time today I noticed there are also a LOT of white mites. 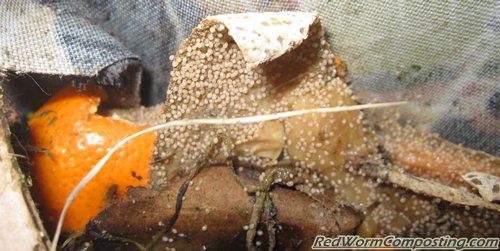 This is really interesting to me since this is the first time I have seen so many in an open system. Clearly, my excessive overfeeding is providing them with some nice living conditions! I can only imagine how many there would be if this was a dark enclosed tub – as it is, they are only concentrated on wet food materials. 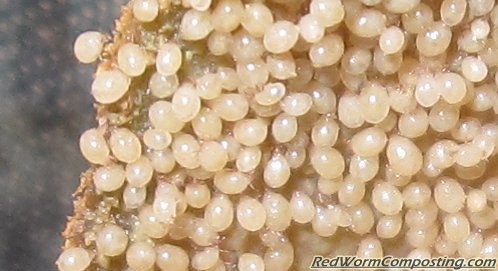 Another dumb move made by yours truly recently was to bring in a culture of large-bodied fruit flies (yes, on purpose! haha) from outside. I had been growing them out in my shed with the plans to test out my ‘mosquito dunk’ theory of dipteran destruction (ie. I wanted to see if it would kill various worm bin ‘fly’ species). Its been getting pretty cold the last little while, so I wanted to make sure I still had some to play around with.

Of course, as ‘dumb’ as I call myself I knew full-well that the likelihood of keeping the fruit flies contained once inside was slim to none. True to form, it was only a day or two before I found them in one of my open tray systems – and from there is was just a hop, skip and a jump over to the Worm Inn. As mentioned, this system is much better than the original at fending off some invasions due to the zippered lid – but its one ‘Achilles Heel’ is the small open space where the two zipper sliders meet. I tried to tape it up, but the tape I used didn’t hold, and I suspect that some may have managed to get in before I even put the tape on.

What’s really neat about this current fruit fly ‘invasion’ (if you can call it that) is that it’s still not obvious. They don’t seem to thrive all that well in my open tray systems, and the Worm Inn is really great at keeping them contained – I didn’t even realize there were all that many in there until I finally opened it up today to take some pictures (so yeah, I might not be doing that again for a little while – haha).

Anyway, as you can probably tell, I love pushing the limits with my systems so that I have things to write about here on the blog – and of course, I also like to remind people that I am a normal, average worm guy who gets fruit flies and mites too!
8)