Here is a question from Geri (**I’ve also provided an audio response at the end**):

I am new at worm compost and I have noticed a lot of little
white insects in my trays–are they harmful and what are they?

Hi Geri,
There are a number of possibilities here – first and foremost however, let me assure you that these critters are definitely NOT any sort of lice. The only type of ‘lice’ you might find in a compost bin are ‘Woodlice’ (a.k.a. ‘Sow Bugs’, ‘Pill Bugs’, ‘Basketball Bugs’) and they are not really lice. Heck, they’re not even insects for that matter (they are crustaceans – much more closely related to crabs and shrimp than bugs).

In my mind there are two main possibilities in terms of what you are finding in your bin: 1) Springtails and 2) Mites

Formerly thought of as a prehistoric insect group, I’ve just learned from Wikipedia that these creatures are no longer actually considered insects at all. Regardless, they are a very common invertebrate found in compost heaps and worm bins (among numerous other habitats). As the name implies, they usually have a spring-like tail appendage known as a ‘fercula’, but interestingly enough some of the common varieties found in composting environments don’t seem to have these. 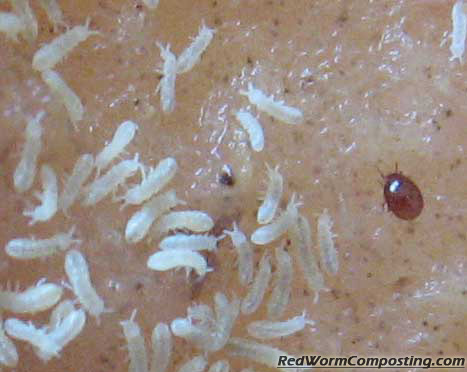 Springtails, like composting worms, feed heavily on microbes – especially various types of fungi – so they are generally beneficial in a composting system. Some people claim that they can irritate the worms when very abundant, but I personally don’t worry too much about their presence my my own systems at all. In fact, they really seem to help break down waste materials – and in particular, seem to be a valuable asset in terms of keeping fungal populations in check (so less likely to see molds etc taking over your bin), and for taking care of wastes that the worms might not be as eager to feed on (such as citrus, and structurally resistant materials like broccoli etc).

There can be a huge array of different mite species – even within single compost ecosystem environment. One of the more common varieties found in worm bins is what I refer to as a ‘white mite’ (I am still not sure if this is one species, or a number of similar species). People often assume these are ‘eggs’ – in fact many vermicomposting newcomers wonder if they are ‘worm eggs’ – since they are white, shiny, round, and don’t appear to move at all. If you watch them for long enough however (or use a magnifying class) you will realize that they do indeed move, and that they possess a short set of appendages to assist with their locomotion. 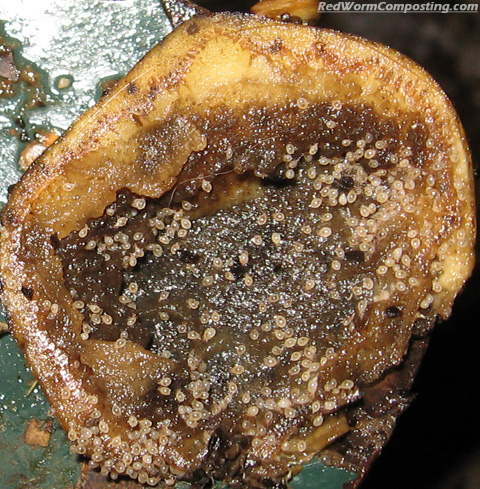 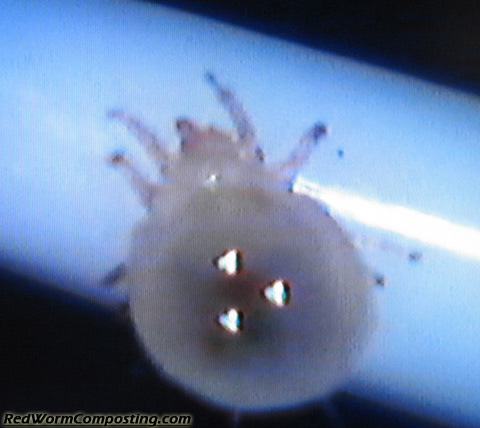 As is the case with springtails, the presence of these critters in your worm bin in itself is definitely nothing to be concerned about. If you are seeing massive quantities of them however (coating the sides and underside of lid – perhaps even coming out of the bin) then it may indicate that you need to make some adjustments so as to better optimize conditions for the worms. In my experience, mites (and these mites in particular) really thrive is wet conditions where lots of excess food is available. They also seem to do well in acidic environments – quite some time ago, I wrote about how one of my bins (fed too much bokashi waste) went ‘sour’, and one of the symptoms was a huge abundance of these mites.

People often assume that these mites actually attack and feed on worms since quite a few can sometimes be found on the worms themselves. Based on my own experiences with this phenomenon, I feel that yes, they do sometimes feed on worms – but in every single case, I’ve observed that the worms were either dead or dying. I suspect, therefore, that these mites serve as general scavengers in worm bins, performing a valuable clean-up role when the need arises. This is yet another reason to keep your eyes open for these white mite population explosions – they can sometimes indicate that something is going wrong with your worm population (likely due to environmental conditions in the system).

If you want to learn a bit more about mites in general, you may want to check out this blog post I wrote: ‘A Mite is a Mite is a Mite? Not Quite!‘

Anyway, Geri – I hope this helps! If you still think your white critters might be something else, please do provide some additional details and we’ll see if we can further narrow down the possibilities.
😎