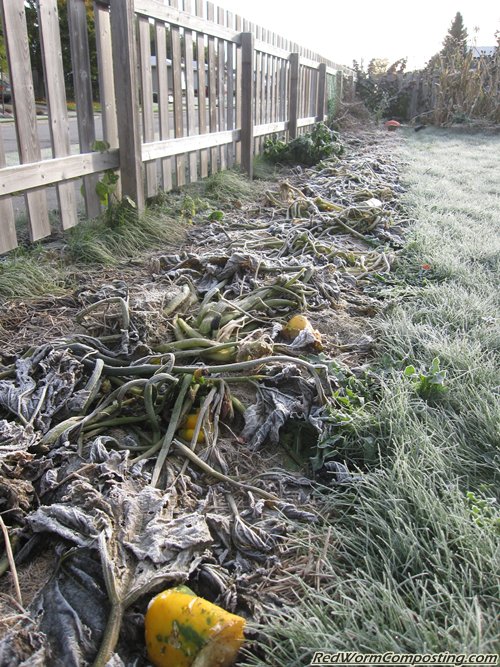 This last week or so has definitely been a bit of a wake-up call in terms of reminding me that winter is just around the corner. The mercury has been dipping well below average for this time of year, and I’m starting to feel a wee bit anxious about getting my outdoor worm beds ready for their winter slumber. Interestingly enough, I have also been receiving a fair number of email questions relating to the topic of cold weather vermicomposting in general.

I’ve certainly written quite a lot about ‘Winter Worm Composting’ – namely my ongoing pursuit of the ultimate (active) winter worm bed, but I wanted to write this post to outline some steps you can take if you want to simply protect your worms until spring. (by the way, you can learn more about my Winter Worm Composting adventures via the links on the ‘Hot Topics‘ page).

That’s right – there is a BIG difference between keeping an active winter system and keeping your worms alive! Red Worms and European Nightcrawlers are very tough worms and seem to be able to survive any amount of cold…so long as they don’t freeze solid, that is! As I think I’ve written before, last year when I was transferring material from my former winter worm composting bed to the new system (of course, after procrastinating until there was snow on the ground!) I actually found wiggling worms in partially frozen material!

There’s a fine line there, however!

Back when I was a vermicomposting novice I set up an improperly insulated system in my dad’s backyard and it froze solid, basically killing off my entire population! (DOH!) I should mention that worm cocoons are a fair bit more cold-resistant than the worms themselves, so even if all hope does seem to be lost you may end up surprised to find a population of young wigglers once the bed/bin warms up again in the spring!

When it comes to fall (outdoor) worm bed maintenance (i.e. making sure you’ve got loads of worms left for next spring) there are basically three main strategies I recommend – 1) Consolidation 2) Protection, and 3) Insurance. It’s not a bad idea to focus on them in that order as well.

As the name implies, this involves concentrating as many worms (+ habitat and food) as you can into fewer key systems. This is not to say that you should completely abandon the systems the worms are being moved from – with a minimum amount of effort you might be surprised how well these ‘neglected’ systems still do. Take my main vermicomposting trench for example – last winter I moved a LOT of material (and worms) from it over to my sandbox garden bed (which was then insulated with straw/leaves and covered with a tarp). I literally did nothing to further protect the trench itself, other than allowing snow to pile up in it!
🙂

In all honesty, I had zero expectation of there being any worms left in it by the time spring rolled around. Long story short – I added some wormless manure to it late in the winter, and found the material to be loaded with worms (and I’m not just talking about newborns here) not too long afterwards.

Consolidation is still a good idea though, since it allows you to put a lot more focus on a handful of (or even one or two) systems. Unless you have access to heaps and heaps of manure and/or protective bedding materials, it probably won’t make all that much sense to fully protect every last nook and cranny of your outdoor (warm weather) systems – especially if you are like me and have a vast array of different vermi-projects on the go in your yard. It’s kinda like painting your house (uh oh, Bentley’s analogy engine is kicking in!)…would you rather use a can of paint to do a really great job on a few rooms, or stretch it out for the sake of having the whole house painted (shoddily)?

As mentioned, it certainly won’t hurt if you do at least add a little protection to your leftover systems as well – maybe a shallow layer of leaves, grass clippings or yard clean-up waste. I should mention that this is really only applicable of you have systems that are in-ground or at least pretty low to the ground. If you have ‘regular’ worm beds, and it gets really cold where you live, you will definitely want to move most of your worms indoors, or create some low-lying protective beds (again, with more effort being placed on fewer systems).

My major consolidation activities so far this year have involved removing as much material as possible from my various small and/or shallow systems (such as my vermi-mulch gardens, and my potato boxes) and either harvesting the worms for sale, or moving everything to one of my planned winter beds. At some point I will also more than likely be moving a LOT of material/worms over to my large winter worm bed (over at my dad’s place).

This is obviously more important than consolidation (although, consolidation as actually a form of protection in its own right) – if you take the time to concentrate your worm herd but don’t offer them any protection, you end up relying primarily on the worms’ ability to cope with the cold.

With ‘sleeping’ winter systems it’s actually very easy to provide protection, even in extremely cold locations. As mentioned already, one of the keys is making sure you are using fairly low-lying systems – with something like a vermicomposting trench or pit being your best option. The earth itself provides excellent insulation from the cold, and keeping the system low to the ground also helps to reduce the impact of ‘wind chill factor’.

Once your low lying system is in place, really all your need to do is then add as many layers of ‘stuff’ as you can – the more the better. I’m in the process of cleaning up my gardens these days, and rather than tossing the material into my backyard composters (as I would often do with weeds etc during the summer), I’ve been laying it down over top of my trench beds (in the picture above you can see all my chopped up zucchini plants now serving as an initial layer of protection (and potentially even food) for my main trench. Unlike during the summer, when I was trying more to optimize the systems, I’ve basically adopted an “anything goes” kind of approach, short of tossing in my non biodegradable garbage of course!
😆

It’s during the cold weather that the “structure’ materials, such as straw, fall leaves, bulky plants etc can really come in handy – not only providing insulation, but also a long-term food source. One important thing to mention here though – if you are planning to add some good ‘food’ materials as well, it’s not a bad idea to make sure you are adding a healthy layer of the protective materials over top. Let’s say for example that you happen to have access to large quantities of aged manure and plan to bulk up your beds with it. While, this is certainly a fantastic winter strategy, one thing to keep in mind however, is the fact that the worms are likely going to move up into it. Unless you also have a really nice thick layer of insulation materials on top, you can still run the risk of killing off a significant proportion of your population.

While I certainly won’t do this with my trench systems, it’s also not a bad idea to add some sort of semi-breathable ‘shell’ over your beds to create an extra layer of wind (and rain) protection while also helping to keep some microbially-generated heat in. I’ve found that a regular tarp can work very well, but if you want to get super fancy I know there are various commercially available compost covers as well. As I mentioned earlier, I used a tarp as an extra layer of protection on my sandbox bed last winter (also on my big winter worm bed). Apart from the protection these covers can offer, they can also be quite helpful for warming up the bed in the spring (assuming they are a dark color) – just don’t leave them on too long!!

When it comes to vermicomposting (especially when just starting out), it is NEVER a bad idea to have an ‘insurance policy’ bin (or bins), just in case something goes really wrong in your main system. Well, the same principle applies here. If you live in Alaska, Northern Minnesota or any other extreme winter locale this is especially important! Even if it simply involves setting up one or two tiny bins in your basement, bringing your worm composting efforts indoors is a good way to ensure that you will be able to kickstart your outdoor systems again once spring arrives.

So there you have it – my basic approach to getting my worms ready for the winter months ahead. As per usual, if you have any questions or experiences to share be sure to leave a comment down below.

Just so you know, I will also be writing more about the topic of cold weather worm bins (apart from getting back into my ‘Winter Worm Composting’ series) fairly soon – so do stay tuned!
8)