Back to the drawing board!

Some of you may have seen the “writing on the wall” (literally and figuratively) if you’ve been following the comments section on my previous vermicomposting potato tower post. As I alluded to there, things kinda went downhill for my potato plants shortly after writing my update.

I think a big part of the problem stemmed from the fact that I added a LOT of manure (and very little straw) all at once to the boxes shortly after adding the second level on my ‘towers’. I think it was, in essence, the ‘straw that broke the camel’s back’. In hindsight however, I can now see that problems must have been brewing beneath the surface for some time now.

Interestingly enough, the worms in these systems have been doing extremely well! In fact, I’ve actually been harvesting worms for customers from these boxes recently since the worm densities are higher than in many of my other beds! I’ve certainly come across some potatoes in the material as well – but nothing remotely like the huge crop I had hoped for.

What’s funny, and just a tad ironic, is the fact that I found a HUGE red potato (bearing an uncanny resemblance to a human heart, I might add – haha) in my corn patch! You may recall that I allowed a few leftover potatoes (from last year) to grow in the bed even though my main focus was on the corn and beans planted there this year. I have not really searched for any more potatoes in this bed (and this jumbo spud was actually found by accident), but I have little doubt that the results will be more impressive than in my potato boxes!
😆 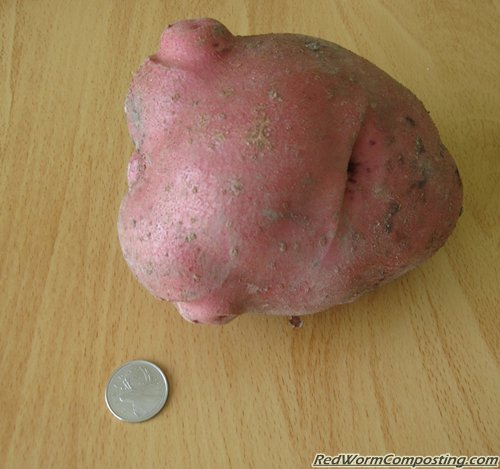 So what went wrong, anyway?

For starters, I am definitely getting the impression that an abundance of composting worms living in the root zone of developing plants can indeed create issues (have seen evidence in some of my other experimental systems). I’m starting to think that it is pretty tough to get the best of both worlds (i.e. big healthy plants, plus big healthy population of Red Worms). I’ll be writing more about this in an upcoming post as well (inspired by some interesting observations from my trench and vermi-mulching efforts this year), since it is certainly a significant finding.

Also, as others have suggested (via comments), wet manure probably also isn’t exactly the ultimate medium for growing potatoes – even if the worms are busily converting it into worm castings. Perhaps if I had mixed in more straw I would have been ok – hard to say for sure.

As per usual, I am very happy that I decided to try this out – not only did I end up with an abundance of marketable worms, but it’s been yet another valuable learning experience! I definitely haven’t closed the door completely on some variation of this concept either! Next year I will definitely give it another shot to see if I can make it work. I think that rather than starting with wet material containing lots of worms, I will use a more mature compost material (the stuff I often refer to as ‘compost ecosystem’), and won’t actually add any manure either. I won’t likely end up with as many worms, but I have little doubt that the potatoes will do much better!

Manure Chard Challenge – Another One Bites The Dust!