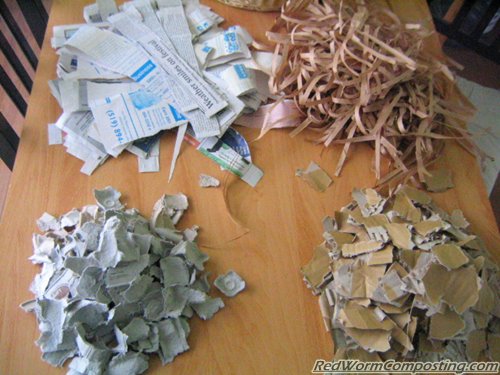 I recently wrote an issue of the newsletter about something I referred to as ‘mature worm bin syndrome’. For those of you not on the newsletter list, or who happened to miss it – in a nutshell, I was discussing what can happen with a typical (enclosed plastic) worm bin over time if you neglect to continue adding ‘bedding’, or if you really didn’t add enough to begin with.

Let’s start with a review of the term ‘bedding’ – what exactly am I talking about here?

Bedding, in this context refers to the carbon-rich, absorbent materials that are used to create some habitat ‘structure’, and to help balance out the water-rich, low C:N waste materials usually thought of as the worm ‘food’ in a worm bin. In actuality, ALL organic matter in the bin basically becomes food over time – some things are simply shorter term food sources than others.

I can’t emphasize enough just how vitally IMPORTANT these bedding materials are in terms of keeping the worms healthy and your system operating efficiently. The best bedding absorbs and holds moisture, while allowing oxygen to penetrate the composting zones. Often, a combination of different bedding types is the best approach since it allows you to take advantage of the strengths, while balancing out the weaknesses of these materials.

For example, peat most and coco fiber (‘coir’) are great bedding materials since they are extremely absorbent, and offer a huge surface area (due to tiny particles) for microbial colonization. The small, tightly packed particles are not however great for air flow, so you might want to mix them with one of the bulkier materials like shredded cardboard, which will also help create more habitat structure for the worms. Shredded cardboard is quite good on its own, but its limitation is that it doesn’t absorb and hold moisture nearly as well as peat, coir, compost or aged manure do, so again, using a mixture of bulky and particulate bedding materials is not a bad idea.

I tend to think in terms of ‘primary’ and ‘secondary’ types of bedding. Primary materials can basically stand-alone (even though mixing them, as discussed, can enhance their potential). Secondary materials on the other hand, should generally only be added to a system where some type of primary bedding is already present. Here is a run down of some common examples of primary and secondary bedding:

Secondary bedding materials tend to be slower to break down, and better for structure than for water retention or food value. It is important to mention that these secondary bedding materials CAN become good quality primary bedding via decomposition. Rotten straw and leaves for example, are excellent bedding/food. What it really comes down to is the material’s ability to hold water and sustain microbes (which are of course interrelated as well – microbes need moisture to thrive). Also, as you can probably tell by now, the distinction between bedding and ‘food’ can be hazy at best. Take aged manure (which is already often mixed with some other type of bedding such as straw or wood shavings) for example – in my mind, it is basically the ultimate all-in-one bedding material, since it holds water extremely well, offers a considerable amount of nutrition, buffers against potentially harmful materials/situations (eg. overfeeding), and offers excellent habitat value as well.

OK, I think we have basically established what bedding is, and why it’s important – so now let’s chat about the how factor – i.e how do we properly put these materials to good use?

Most people are at least aware of the fact that some sort of bedding needs to be added when a worm bin is first set up – although, as I mentioned in the newsletter, I am constantly surprised by how little bedding my customers are adding to their bins (they often bring them to show me when buying worms). It is important to remember that you can really never add ‘too much’ bedding – as many of us know from first-hand experience, the same definitely can’t be said of food! (overfeeding is easy!).

I think my videos can be a bit misleading in some ways since I talk about adding almost equal amounts of food and bedding (assuming you are going to leave the system to sit for a while), but what I don’t mention is the fact that I will often go back and add even more bedding once the level of material in the bin has shrunken down substantially (happens pretty quickly). When there are worms in the system, there should definitely be a significantly higher ratio of bedding to food materials – although again, the case of aged manure is an exception since it basically can serve as both.

Even when people DO add a fair amount of bedding when first setting up their bins, I get the feeling that there are a fair number who then promptly forget about the importance of these materials moving forward – ie they basically just add food waste from then on. You can definitely get away with this for quite a while (especially if you are using some sort of open system), but eventually it can catch up with you, and manifest itself as the ‘mature worm bin syndrome’ I wrote about. The worms may start crawling, dying or disappearing for no apparent reason, the bin may start to give off foul odors – or any number of other potential symptoms may develop.

Adding at least some bedding on an fairly regular basis is of course the key!

In my newsletter article I suggested adding a small amount of bedding when you add food materials, and this is definitely not a bad idea at all – especially when you are adding really wet stuff. Dig yourself a depression, layer the bottom with dry bedding, add the food, then cover completely.

I failed to mention however, that there is another, much easier, approach. Basically, you just make sure you maintain a nice thick layer of bedding of top of your main composting zone at all times…that’s it! As this material gets moistened, shrinks down, and get consumed, simply continue to top it up (with dry material). Make sure there is enough so that you can easily bury food waste in it.

An added bonus to this approach is that it tends to dry out the upper part of the bin, thus discouraging the worms from roaming up there. Also, you will likely find that it does wonders for helping to keep the contents of the bin from getting too soggy in general (a situation that can lead to all sorts of annoying issues).

Anyway, I just wanted to write a follow-up post on this topic since the newsletter article seemed to strike a chord with quite a few readers. I definitely don’t mean to imply that all my advice is ‘gospel’ by any means (I always encourage people to test things out for themselves), but if there is one thing I’ve learned over the years as a passionate amateur vermicomposter, it’s that the liberal use of good bedding (aka ‘habitat’) materials can help you avoid a lot of potential headaches (or even solve issues that arise) in a worm composting bin.