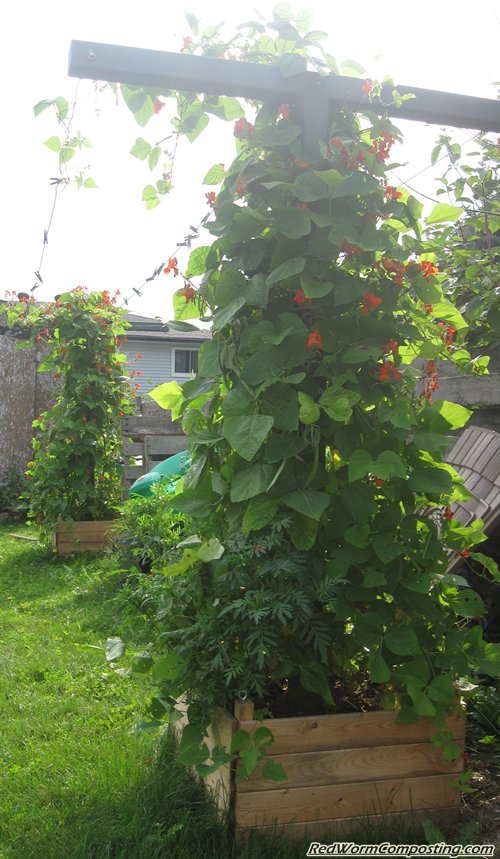 In my ‘Vermi-Mulch Bean Garden‘ post I mentioned the fact that there was still yet another vermigardening project I wanted to write about here. So, here ya go!
🙂

Looking back now, it’s hard to say for sure how I settled on the idea of creating a set of laundry-line ‘hanging gardens’. I suppose I was in the process of planning out the gardens for the season – feeling inspired by my new ‘gardening bible‘ – and I saw the unused laundry line as potential climbing plant real estate. Initially I thought I would simply dig beds at the base of each support pole, but I eventually decided it would be really cool to actually have a pair of planter boxes instead. Not only would the plants benefit from the raised bed approach, but it would also afford me the opportunity to try out yet another red worm gardening experiment.

As per usual, I enlisted the help of my dad and we focused on getting the boxes built as quickly as possible – the growing season was already well under way by this point, and the seedlings I wanted to plant in the boxes had become quite gangly and unhealthy.

Unlike the ‘Worm Composting Potato Towers‘ I ended up taking a somewhat more conventional gardening approach, but basically by accident (which I’ll explain in a minute)! Rather than solely adding Red Worm ecosystem material and aged manure, I also added a lot of peat moss. Looking back now, I am really glad that I did!

Thankfully, the planting day just happened to really, really wet (it was literally raining ‘cats and dogs’ as I put the plants in), so that helped to get things off on the right foot (especially since peat moss can be a royal pain to fully moisten). Essentially the layering of ‘soil’ materials was as follows – at the very bottom there was a nice thick layer of aged manure; next (and filling up the majority of the box) there was the peat moss; lastly, there was a thick layer of worm compost ecosystem material (same stuff used for bean vermi-mulch gardens).

The large quantity of peat moss turned out to be important because it helped to ensure that the overall level of material in the boxes didn’t shrink down too much – in fact, initially (as it soaked up water) it helped to boost the volume of material. As I’ve written before, I am usually not a big fan of using peat moss all that much (since harvested in an unsustainable manner), and my original plan had been to simply fill the boxes with the composting ecosystem and horse manure. I quickly realized however, that I was going to need a LOT more material than I had on hand. Luckily I happened to have the bag of peat moss, so I decided to use it as a filler. 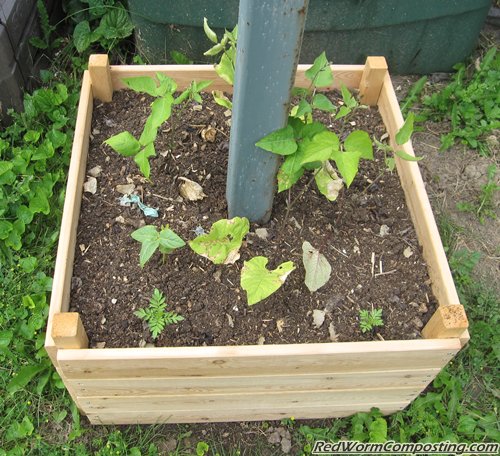 Initially the growth of the beans was pretty dismal – not too surprising, given the serious neglect they had suffered as seedlings. Gradually they did however seem to take hold and start making some progress. The real turning point seemed to be when I decided to add a considerable amount of ‘Black Medic’ (Medicago lupulina) which I’d uprooted from my lawn. I thought perhaps that the rhizobial bacteria that help this weedy legume grown (by ‘fixing’ nitrogen in the roots) might also be beneficial for the beans I was trying to grow. Interestingly enough, shortly after adding this material, the bean foliage became a darker green, and growth of the plants in general was much more vigorous. 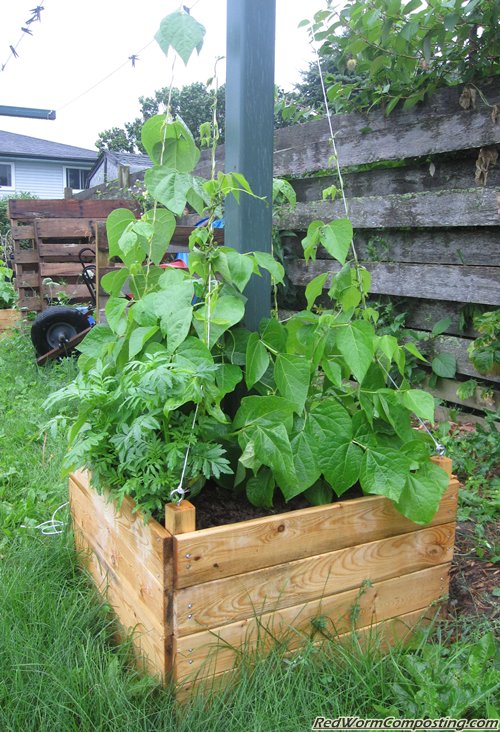 I have three different types of beans growing in these boxes: 1) Yellow pole beans, 2) Chinese Long Beans and 3) Scarlet Runner Beans. I also added a few marigolds to help fend off pests.

As you can see in the first photo, the plants have grown really well! In my head I had envisioned a complete overhead canopy of bean foliage (and hanging beans of course), but beggars can’t be choosers, right? I am shocked that the plants have done as well as they have! I have quite a few tentrils creeping out along the laundry lines (and strings I tied up), and LOTS of beans ready to harvest. 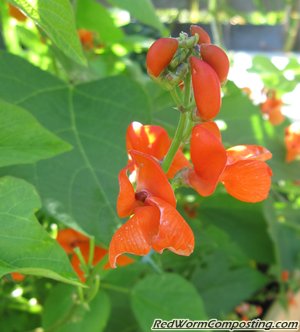 Another positive is the fact that the scarlet runners have been producing an abundance of beautiful red blossoms for quite some time now, adding a bit of extra aesthetic appeal to my otherwise deteriorating backyard show.

As for the worms…

Periodically, I added more aged manure on the surface of the beds to help sustain my wigglers, but in all honesty I haven’t really spent too much time investigating their current status. I’m sure there are still plenty of them in there, but I suspect that (unlike the case with the potato gardens) the plants are the ones really reaping most of the benefits in this partnership. Once the bean plants are finished producing their crop I will certainly dig around a lot more and will report back on what I find. My prediction? Loads of teeny tiny worms living in a less-then-ideal composting worm environment!

Anyway, I’d definitely say that the experiment as a whole has been a huge success. Next year I will undoubtedly do this again, but I’ll make sure to take better care of the plants and get them in earlier so I can produce a much more impressive overhanging show!

In the meantime, I’m going to try and figure out what to do with all these yummy beans!
😉