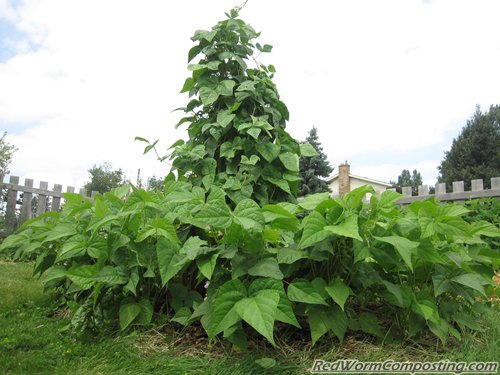 In my last vermicomposting trench update I mentioned that I have been testing out some other Red Worm gardening methods to see how well they work. By now, most people likely know about my ‘Worm Bed Potato Towers‘, but there are still several ‘vermi-gardens’ I haven’t written about at all.

I love the vermi-trench concept, especially since it has a lot of value as a worm bed for someone trying to raise worms for sale – but I know not everyone is trying to grow pounds of worms, or feels like getting involved in that sort of back-breaking labor – just for the sake of helping the garden grow. Trenches also take up valuable garden ‘real estate’, and can even get in the way a bit when you are trying to access your gardens (I have a plan for next year that will hopefully solve both of these concerns).

The long and the short of it is that I wanted some methods that could be applied to a ‘regular ol’ garden without too much in the way of extra labor. Thus the ‘vermi-mulch’ (I sometimes refer to it as ‘living much’) concept was born.

Now, let me start by saying right off the bat that this approach – just like anything else I’ve done to date – is not some sort of revolutionary new concept. I would never claim to have “invented” any of these ideas – but they also have not been taken from anyone else (I always aim to give credit where credit is due). Just as an interesting aside regarding my vermicomposting trenches – while in all honesty I had never heard of anything referred to as a (vermi-)composting trench when I started writing my articles about them, I was rather amused when I eventually came across an article in Mother Earth News from the 70’s that talked about the exact same concept, sans worms.
🙂

Anyway…back to our topic of discussion…

I’ve basically created two new veggie gardens (not counting container-type gardens like the potato boxes) this year in my backyard, and have been doing the vermi-mulching in both. As the title of this post implies, I’ll be talking here about the ‘bean garden’.

I have NEVER had any luck growing veggie legumes in the past. I’ve always been able to grow really nice looking seedlings using peat pellets, but once they’ve hit the garden, they’ve always struggled. I don’t even think I fully realized just how much they struggled in the past until I finally witnessed (this season) what beans/peas can do when provided with good growing conditions.

The main goal of the bean garden was to produce an abundant crop of green bush beans, along with two different kinds of pole beans. (I also included some swiss chard and marigolds for kicks and giggles)
Inspiration for the garden (and much of my veggie gardening this year in general) came from my new favorite gardening book, ‘The Vegetable Gardener’s Bible‘ (links to a review I wrote on the Compost Guy blog). The author has included many amazing photos of his own garden, and it helped me to visualize what I wanted mine to look like.

As with most new gardens, it all started with some digging. I’m a bit of a masochist however, so rather than renting a rototiller, I decided to do it all by hand! 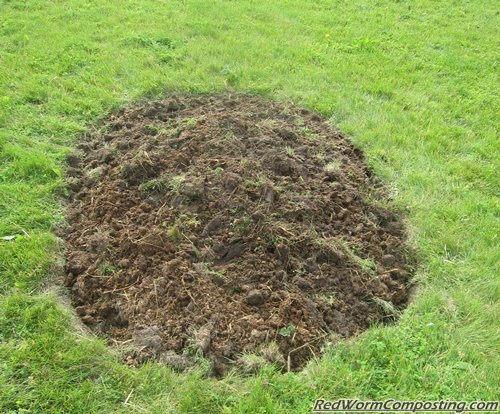 June 12, 2009 – It all started with some digging…and then some more digging

Ok, so I’m only joking about being a masochist – what it really comes down to is the fact that I love working out in the garden, and just plain enjoy the added appeal of doing it all by hand.

I basically just turned over all the grass, then chopped and dug, chopped and dug…over and over and over again. Next I dug in a large quantity of the bedded horse manure I’ve been working with this year. I wanted to add rich organic matter for the benefit of both the Red Worms AND the plants.

I next set up a bamboo pole teepee in the middle of the garden, with some plastic netting wrapped around it, to help provide the pole beans with as much vertical growing space as possible. [Now that I’ve seen what these plants can do, I have much bigger plans for them next year!]
8) 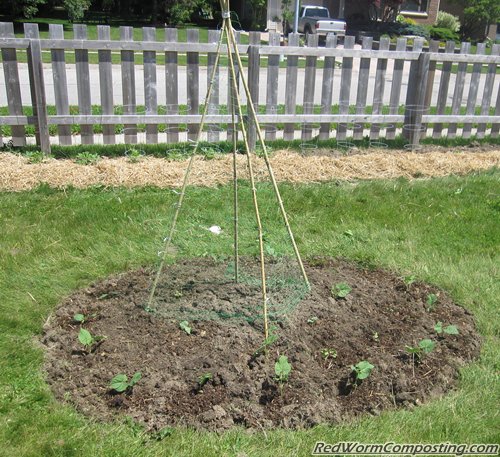 Once the tepee was erected and ready to go, it was time to start planting! As per usual, all the plants had been started in peat pellets – I find that introducing plants as seedlings (rather than direct seeding) gives them much more of a fighting chance against pests and disease early on (and even once they are fully grown for that matter). I actually planted a similar set of yellow bush beans around the perimeter of my second vermi-mulch garden – but direct seeded them – and they were mauled badly by slugs as they germinated and started growing. The bean crop from these plants will be much lower I suspect.

The beginning of the vermi-mulch idea starts in the planting hole. Before adding the plant, I filled each hole most of the way full with a coarse vermicompost material (something I refer to as ‘compost ecosystem’) – basically the ‘stuff’ that worms have been harvested from. It still contains lots of juvenile worms and cocoons however – certainly enough to create our future worm population in the garden. The advantage of starting in the hole, aside from giving the plants a nice boost early on, is that it provides the worms with an important refuge during the hot, sunny weeks before the vegetation starts shading the bed (although, as you’ll learn in a minute, there were other ways to help keep the worms sheltered)

Next, it was a matter of adding more and more of this same material over top of the soil as a mulch. I only did so because I happened to have lots of it on-hand at the time. You could just as easily add aged horse manure or some other rich organic matter. 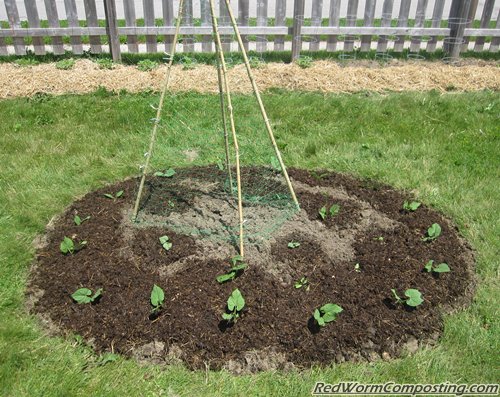 June 14, 2009 – More compost ecosystem gets spread over the surface of the garden

I left the garden covered with just this compost material for the first little while, but not too surprisingly, I had to water it quite regularly just to make sure it didn’t completely bake (and dry out) in the summer sun. 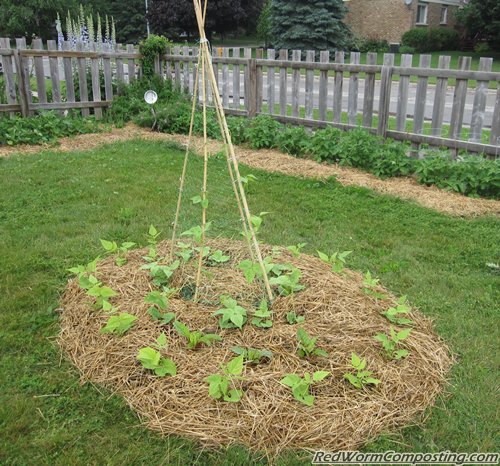 June 27 – Straw mulch helps to keep things moist down below.

At this stage, the vermi-mulch garden was basically complete! All that was left to do was water the plants periodically and leave them grow. Additional layers of organic matter (aged manure, grass clippings etc) were added every now and again, and once the inside of the teepee was quite shaded from the pole beans, I actually heaped up a pretty substantial amount of aged manure right in the middle – this basically became a central hub of Red Wiggler activity (although there were plenty all throughout the mulch layer as well). 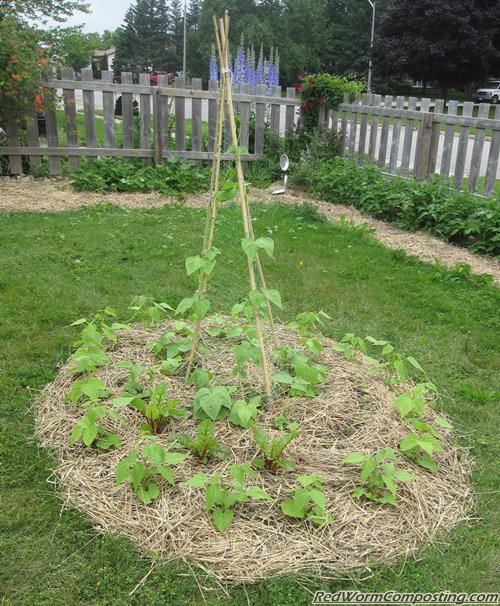 During the early stages of plant growth I still wasn’t sure what to expect. Everything seemed to be doing ok, but I just could imagine how the plants would ever get to the point of actually filling out the garden. 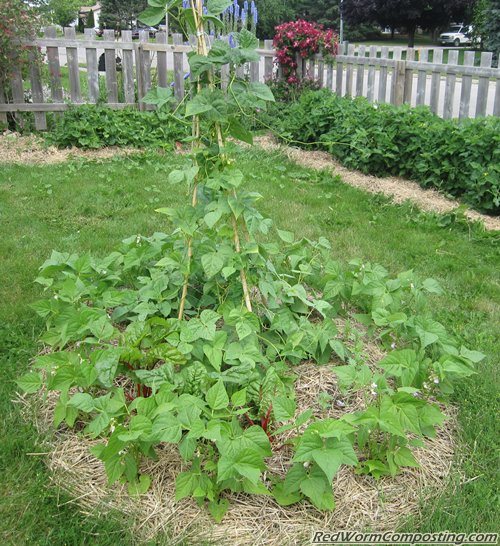 Obviously one factor that may have limited growth somewhat early on was the cold weather. It was more like May than June/July! But eventually the real warmth did arrive (later in July) and the plants really seemed to respond quickly. I had wondered if my bean plants would ever look as healthy and dark green as the ones pictured in gardeners ‘bible’. Well, as the first and last images show, I really didn’t have anything to worry about!
🙂 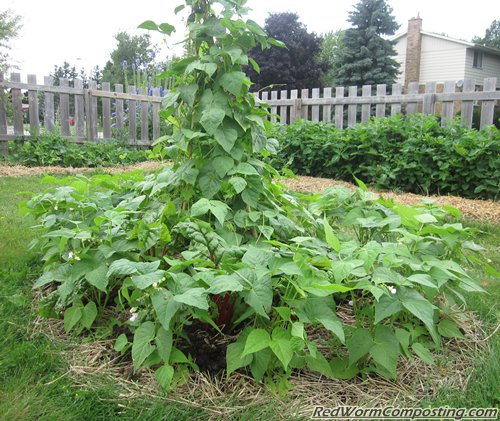 July 23, 2009 – Getting close to first harvest for the bush beans. Likely eating chard by this point

I love to eat green and yellow garden beans – nothing quite like steaming (or lightly boiling) them, then putting a little butter and salt over top! Mmmmmmm…
One thing you quickly realize when to grow this many bean plants however, is that no matter HOW tasty these beans are and how much you love them – there are always going to be too many to eat! 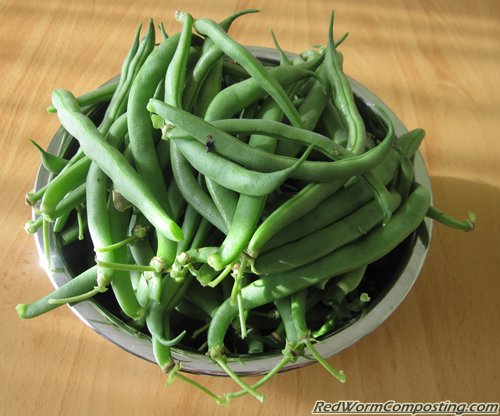 What’s cool about this growing season, is that we now have a freezer down in the basement, so I will definitely be well stocked in zucchini, tomatoes (hopefully – haha), beans, and chard stalks for the cold months ahead. There is going to be a LOT of spagetti, chili, soup, stew and stir-fry served in Christie household this winter!
😆 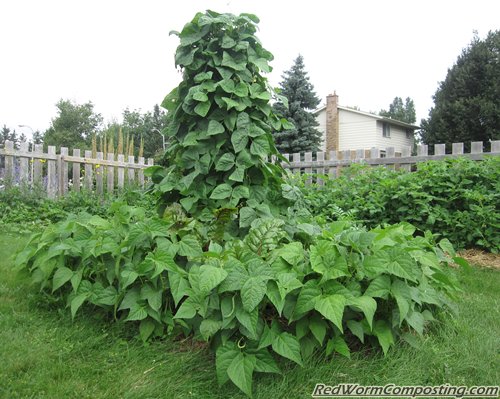 August 11, 2009 – Lots and lots of beans for the pickin! Amazing how thick the growth on the teepee is by this point.

All in all, I have been extremely pleased with the growth of the plants in my vermi-mulch bean garden. I have no idea how much of the success can be attributed to the Red Worms and the castings they’ve produced, but I have little doubt that they have been very beneficial!

What’s funny about all of this, is that I can’t tell you how many times I’ve told people that Red Worms shouldn’t be added to your garden! They are ‘composting worms’ after all!
😉

Clearly, with a little extra effort, you can indeed enjoy the benefits of having Red Worms (and European Nightcrawlers for that matter) in your gardens, and I certainly encourage everyone to set up their own vermigardening systems. Speaking of ‘vermigardening’ (and referring back to the above-mentioned bit about ‘giving credit where credit is due’) – if this is a topic that interests you, I highly recommend you not only check out (and sign up for) the Vermicomposters forum, but specifically, you should also join the Vermigardening group there (where I first came across that term being used).

Believe it or not, there is still one more vermigardening experiment I’ve been meaning to tell you about! It involves more bean growing – but with an interesting twist!
Stay tuned.
8)