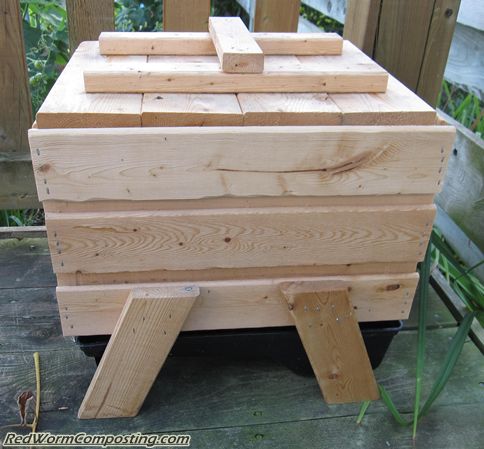 Just a quick update on my wooden stacking system. As you can see, I’ve decided to add a second tray already – something that may seem surprising. I normally recommend that people wait until the first tray contains a fair amount of vermicompost before adding a new one – but given how shallow these particular trays are, I figured it might not be a bad idea to go this route.

I started by partially filling the second tray with wet corrugated cardboard, but since then I’ve also been adding some coffee grounds and filters. So far there hasn’t really been much sign of the worms moving upwards, but I can’t say I’m too surprised, given the fact that there is still plenty of food value in the lower tray. Speaking of which, I realized that this double tray approach actually lends itself quite well to vermicomposting with coffee grounds since a lot of grounds just end up falling down to the first tray anyway. 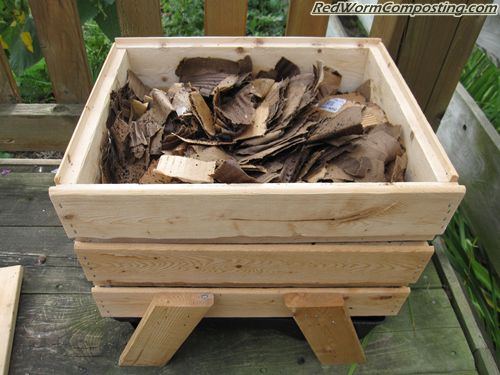 The contents of the first tray seems to have settled quite a bit since the worms were added, so I’m confident that they are busily munching away down there. I did a little digging around this morning and saw lots of healthy looking worms, so I’d say we’re on the right track so far.

All in all, I’ve been pretty pleased with how well the system is working. I expected it would need a lot of additional moisture during the dry summer weather we’ve been having ever since I set it up. But it actually appears to be retaining moisture quite well. I’ve added quite a bit of water, don’t get me wrong – but I can easily leave it for at least a few days between watering sessions without any worries about it getting too dry.
I do see some dry coffee grounds around the outer walls, but most of the grounds seem to be staying nice and moist.

Anyway – that’s it for now. I’ll probably provide another update in a couple of weeks.
8)