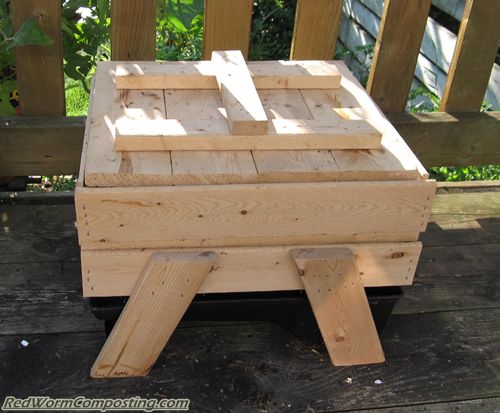 Recently, I decided to dust off (quite literally) my old wooden stacking worm bin and get it set up and ready for some worm composting action once again. I’ll be honest – I am NOT a huge fan of stacking systems, for a number of reasons, but when it comes down to it I really haven’t tested them out as much as I should. Lots of people have ’em (and love ’em), so I do receive questions about their use on a fairly regular basis. Wooden systems are certainly a different kettle of fish than plastic systems, but a lot of the same (stacking system) principles apply.

So what are my plans, you ask?

Of course, I need to add some “twists” here – I can’t simply set it up in a totally normal manner. That would be too easy!
😆

I’m not going to do anything completely off the wall, but there are a couple of things I want to test out with this project. For starters, I have decided to keep this bin outside for as long as the weather cooperates (i.e. until it gets too cold). I have plenty of outdoor systems – and now actually prefer to do most of my vermicomposting outside, but I still tend to keep all my smaller “worm bins” indoors. I’ll be interested to see how well the system performs, and what sorts of issues/differences I might end up encountering.

Secondly, I aim to ONLY add shredded cardboard and coffee grounds (with filters). I’ve never tried a solely coffee grounds (as food) system, and a number of people have asked if this is possible recently – so I thought it might be fun to test it out!

Setting up the bin was very straightforward. I started with multiple layers of newsprint laid down over the screen bottom of the first tray. 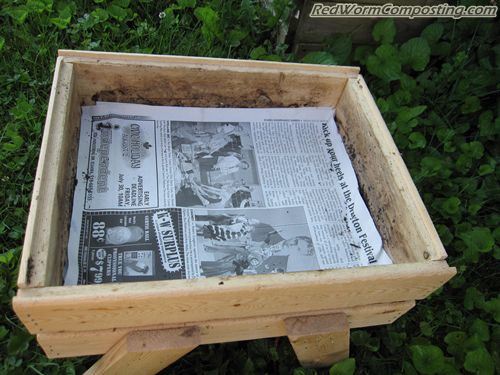 Next, I added some shredded (drink tray) cardboard, along with some frozen coffee grounds I’d been saving up for a number of days. 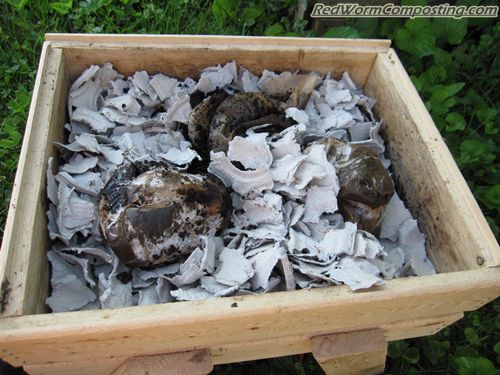 I then simply added more cardboard over top and put on the lid. 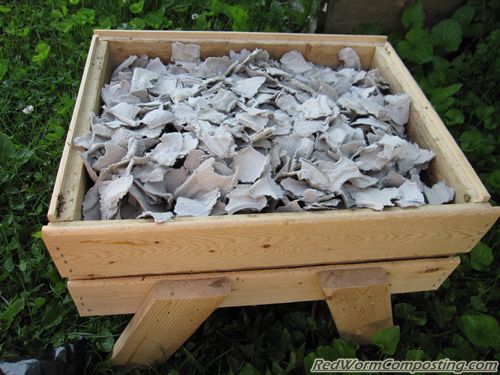 Notice I didn’t add any of the other trays initially? (hint hint)
I think one of the most common misconceptions among new vermicomposters with stacking systems is this idea of setting the entire thing up all at once – perhaps this is something the manufacturers suggest doing? I have no clue – but what I DO know is that in order to fully take advantage of the principles of “flow-through” (aka “continuous flow) vermicomposting, we are much better off starting at the bottom and working our way up.

As for the worms…

I will likely wait until at least next week before adding the Red Worms (even if I had lots of Euros on hand, I wouldn’t use them in a stacking system since they definitely tend to prefer a deeper bed). I want the system to be well-aged, and to contain a sufficient quantity of grounds by the time I get started. As far as initial quantities of worms go, I will more than likely add the equivalent of a single bag of “Red Worm Culture” (a product I sell up here in Canada) – which might be the equivalent of 500 worms or so.

I have a sneaking suspicion that keeping the system nice and moist is going to be my biggest challenge. I haven’t had much luck with coffee grounds in well-ventilated systems before – so it will be interesting to see if I can somehow overcome this hurdle.