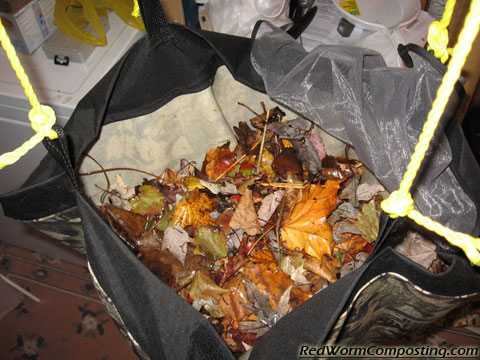 Just thought I would provide a quick Worm Inn Journal update today. Nothing monumental to report, but the system seems to be working very well (as predicted). It’s become quite clear that I will more than likely need to continue spraying the system with water – likely on a daily basis – in order to keep the upper zone nice and moist for the worms. I am actually really happy to see this since I’d much rather add water than have to soak up excess moisture (with dry bedding) pooling in the bottom of a plastic tub type of system. This will also really help to keep the worms concentrated near the top, rather than distributed throughout the system (although I have little doubt there will still be some down below).

As you can see in the picture, today I added a really thick layer of fall leaves over top of my composting mass. Unlike shredded cardboard (and other absorbent bedding materials), they won’t end up drying out the system – in fact, they should really help to reduce the amount of water lost via evaporation. They will also become an ideal worm habitat and food source as they start to decompose.

Before adding the leaves, I added a substantial amount of ‘homemade manure‘ and a bit more aged manure/straw. I should also mention that since starting the system I have also added a fair amount of shredded cardboard to help keep things balanced.

So far so good, the worms seem to be really active in the upper layers and I have yet to see any trying to escape up the sides our out from the bottom. I’m totally sold on the homemade manure approach to feeding now too – worms go gaga for this stuff, and it’s amazing how quickly it disappears!

I am harvesting a bunch of worms from my outdoor systems today, so hopefully I’ll be able to add more to the Inn over the weekend!