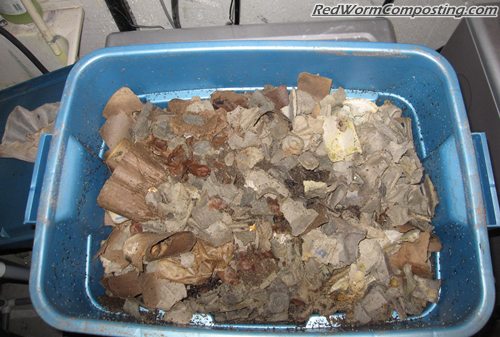 As seems to be the case every year, I ended up completely neglecting ALL my worm composting systems over the holidays. Now that I am starting to get back into “real world” mode, I’ve been spending some time checking on things.

Neglecting enclosed plastic bin systems almost never causes issues – in fact, it can actually be really beneficial in a lot of cases! I’d say this was definitely the case with my BOM-6000 system.

As some of you may recall, this became my “cofee grounds vermicomposting” bin in the fall after emptying the contents of my wooden stacking system into it. I ended up cutting the (BOM coffee grounds) experiment short when it appeared that the worms were not responding favorably to a grounds-only (apart from egg shells and cardboard) diet, and started adding typical worm bin food scraps.

The last time I checked on the bin (may have been as long ago as October) it was getting a bit stinky due to the large quantity of frozen food waste I had recently added. Certainly no longer the case!
😆

You can always gauge the degree of worm bin neglect by the amount of bedding material that’s been consumed by the worms. Needless to say, I found LOTS of paper-pulp worm castings when I opened up the bin today! 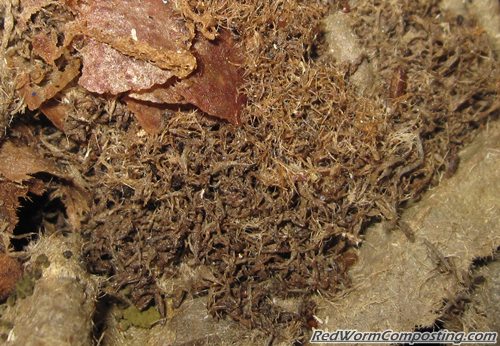 Interestingly enough, I couldn’t find any indication of the presence of coffee grounds in the bin, other than a zone of really dark castings down towards the bottom! Everything smelled wonderfully earthy when I dug around a bit, and I was happy to see that the moisture content is still at a reasonable level.

In an effort to get things back on track in this system, I added some fresh cardboard at the top then dumped in a decent amount of frozen food waste. 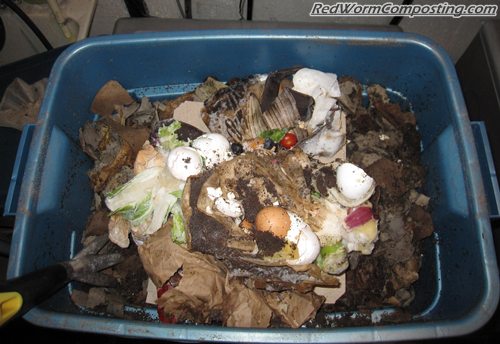 Once it thaws out I will likely add a fair amount of shredded cardboard over top.

——–
OK – that’s it for this update. I’ll let everyone know what’s going on with my neglected Worm Inn and Winter Worm Windrow systems sometime soon!
🙂