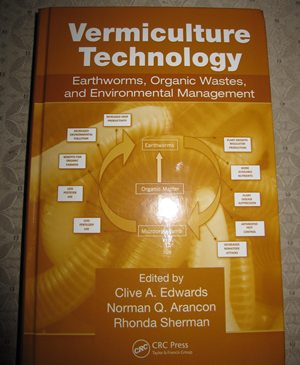 Sorry things have been so quiet as of late – haven’t quite bounced back from my holiday slumber I guess!
🙂

Today I wanted to let everyone know about a brand new vermicomposting/vermiculture book, published by CRC Press.

It’s actually been a project sitting on the backburner for quite a few years, as indicated by various contributions from those no longer involved in the field, but the content is absolutely stellar – especially if you are interested in the large-scale/commercial and/or academic research side of things.

Here are the chapter titles:
1) Introduction, Hostory, and Potential of Vermicomposting Technology

2) Relationships between Composting and Vermicomposting

3) Biology and Ecology of Earthworm Species Used for Vermicomposting

4) Discovery and Development of New Species for Vermiculture

5) The Microbiology of Vermicomposting

11) The Production of Vermicompost Aqueous Solutions or Teas

12) The Suppression of Plant Pathogens by Vermicomposts

19) The Commercial Potential and Economics of Vermicomposting

21) The Use of Vermiculture for Land Improvement

23) The Status of Vermicomposting in North America: A Rapidly Developing Technology

25) New Developments and Insights on Vermicomposting in Spain

26) Vermiculture and Vermicomposting in the United Kingdom

27) Vermiculture in Australia and New Zealand: From Earthworm Production to Commercial Vermicomposting

28) Origins and Spread of Vermicomposting in India: Focus on Sustainable Agriculture

29) Vermiculture in the Philippines

30) The Status of Vermicomposting in Indonesia

32) Vermicomposting Research and Activities in Mexico

33) The Scope of Vermiculture in Cuba

34) Commercial Applications of Vermiculture in China

35) Progress in Vermicomposting in Belarus, Russia, and Ukraine

Phew!! That took some typing, I gotta tell ya!
😆

Those of you who know me well, know I tend not to be the type of guy to toot my own horn but…
(WARNING: imminent horn tooting!)

…I just can resist! lol 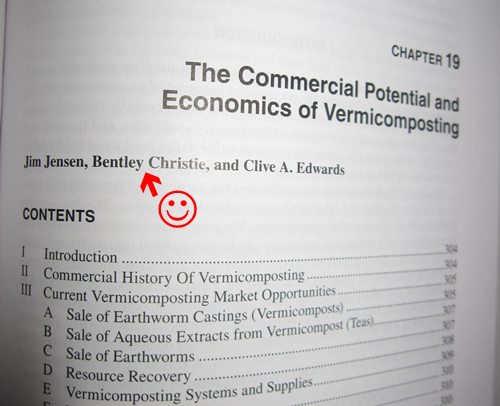 Last year I received an email from Dr. Clive Edwards (who had become a pretty good email friend by then) asking if I’d be interested in helping out with one of the chapters in the book. Let me point out right off the bat that I did NOT write the chapter – Jim Jensen deserves primary recognition for that. My job was basically to work through the content (which was written quite a number of years ago) and to help Dr. Edwards update/modernize it.

In all honesty, I protested the fact that he wanted to include my name at all, but he insisted (which meant that I was among those who received a free copy of the book as well) thus twisting my rubber arm into submission.
😆

I won’t lie to you – this is NOT an inexpensive book (tends to be the case with high caliber academic publications)! The “regular” price is a whopping $119.95, unfortunately. I should mention, though, that they currently have an introductory special, if I’m not mistaken – $95.96 + Free shipping until January 21st. Only problem is that I don’t know how to access this deal – the regular price is the only one listed on the product page:
Vermiculture Technology.

I was excited to see that they have an “eBook” version, but oddly enough it seems to be the same price (which completely baffles me, if that is indeed the case).

Anyway – I have been in communication with CRC editor, John Sulzycki, and am hoping to hear back about all this.
Stay tuned!
8)