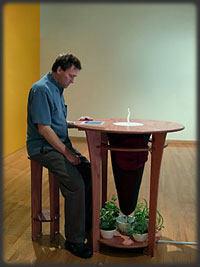 Even though I added a link in the sidebar quite some time ago, I have yet to write about Amy Youngs’ intriguing “Digestive Table” (I have however written about it on the EcoSherpa blog previously). It’s almost certainly the coolest idea for a worm composting system I have ever seen! It’s a piece of art, yet is completely functional as a table and kitchen waste disposal system – not to mention education tool.

Amy Youngs is also a very active artist. Here is a blurb from her bio page:

The worm composting system incorporated into the table consists primarily of a funnel of landscape cloth hanging down from the underside of the tabletop. There is a small lid in the middle of the table that can be lifted so that scraps can be dropped down into the vermi-bag (a term I just made up, by the way). It is actually a very simple form of “continuous flow” system – eventually all material at the bottom will be worm compost, and most of the worms will be up near the top where all the yummy rotten food waste is. There is a worm composting system called the “Swag” that relies on a similar principle, and really there are limitless ways you could make your own funnel worm composter at home! Hmmm…this has me thinking…

If that isn’t cool enough, Amy’s system also includes a fully-integrated video system that allows you to actually watch as the worms and other creatures chow down on the food waste! Oh, and did I mention the fact that she has made available (for free) a construction diagram for this system?
8)

I wish I was a little more of a handy-person myself – I would love to build (and own) something like this!

Some might assume having an (essentially) open worm composting system like this would create a major stink. In fact, all the extra oxygen getting in along with the activities of the worms would likely make it even more odour-free than a normal worm bin. The only thing you’d really need to watch out for is drying out of the composting mass. I suspect that water would need to be added on a regular basis.

Be sure to check out the Digestive Table website, and watch the video if you have a fast connection.