One of the things I’ve been wondering about for a while is the possibility of using some sort of big old-fashioned manual-crank grinding device for crushing up worm food materials. One of the possibilities that came to mind was a big meat grinder, but I’ve always assumed it would cost way too much to get my hands on one.

A recent email from (Brazilian) RWC reader, Gustavo, has me re-thinking this possibility! Gustavo initially emailed to let me know how he was using a meat grinder to prepare food for his African Nightcrawlers. This certainly caught my attention, and I was quick to ask if he’d mind sending in some pictures. As you can see, he happily obliged (thanks again, Gustavo).
8)

I’ve included much of Gustavo’s initial explanation, along with the captions he provided for each picture

Hey, man! Just wanna share something cool I did today. I’ve seen a lot of people trying to make their worm bins work faster by using their blender to triturate the worm’s food. It may be good, but if you don’t control yourself in the process you only get a load of goo that will let the bin too wet. Anyways, I don’t like it. I prefer to use my blender to mix MY food. So, I was cleaning my house and found my grandma’s old meat grinder! I gave it a try and get a wonderful result, the food was homogeneously triturated. I did it to some vegetables, which dropped a lot of water so I placed them in the bin in one side and used the water to irrigate a dry spot, and even with some hard things, like manioc (I think this is the english work for that, or cassava).

The best thing is it’s cheap if you don’t own one and can find a lot of them in the internet. I think you buy used things there in ebay, right?

I let mine placed outside the house and clean it after using it with a hose (drying it later, of course, so it don’t get rusty).

That’s it. For small bins, like mine, it may be a good way to accelerate the process.

This is my grinder disassembled, it’s easy to understand how it works. The handle pushes the food and rotates that smaller part (in my hand) at the same time: 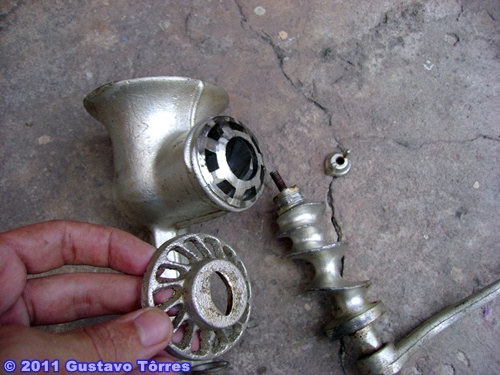 This should explain it better: 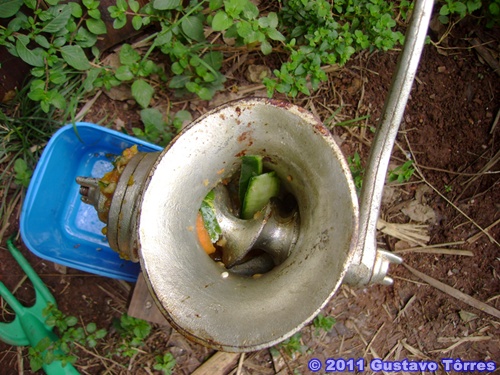 So, this is it. Just put the food in the grinder and rotate the handle. You only need to be cautious to not let your finger inside it too, it’s manual, but it’s very strong and can pull your finger very easily if the rotation is fast enough. I prefer to press the food (when needed) with a stick. 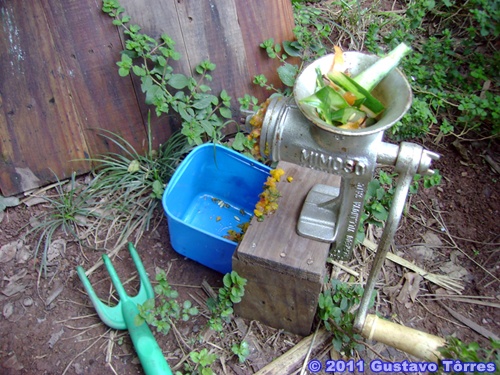 This picture shows how the finished “product” is. You can open or close it a little more for bigger parts. I like it almost closed for smaller parts. 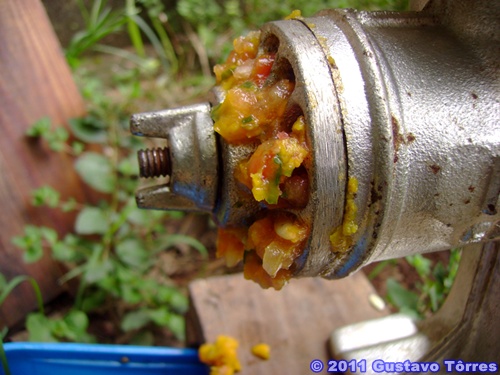 The final result. Today’s lunch: zucchinis, carrots, pumpkins, tomatos and cucumbers. (I translated these names in google translator, don’t know if they right) 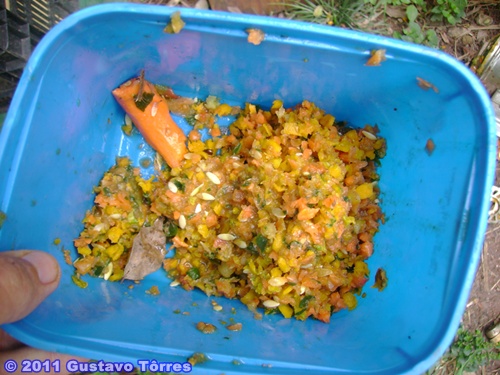 I put this today in the bin, this is how it looks like.. 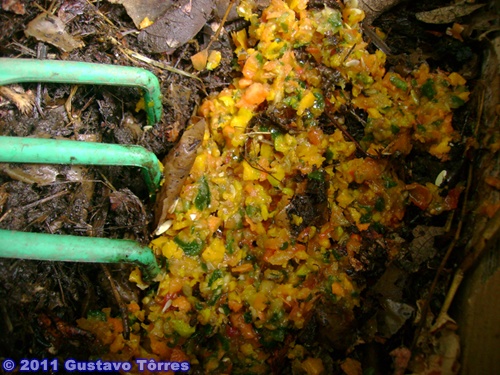 But this picture I took a few days ago shows what you get in only 4 days. You can’t distinguish what is food, what is compost… I can only distinguish the leaves and one of my chickens feather. I tried to show how many worms were there, but I have africans, they’re very fast, when I took the leaves they ran away. Btw, the appearance is not very beautiful, it’s too humid… it’s raining in Brazil for 2 weeks – it’s an outdoors bin. 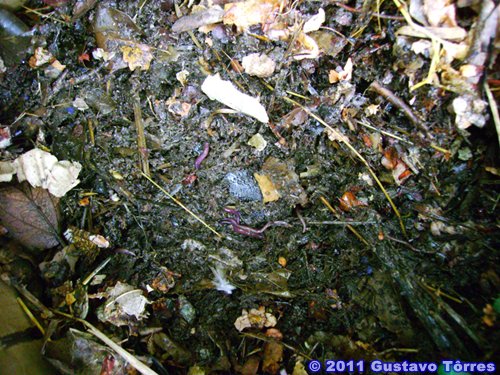