Getting Rid of Fruit Flies With Diatomaceous Earth

My friend John is a serious Worm Inn fan. Back in the fall, he upgraded from the standard model to the Worm Inn Mega.

In John’s case, this came in the form of a fruit fly invasion.

Needless to say, he was at least thanking his lucky stars for that zippered lid!
😆

Anyway – sometimes necessity can be a real mother!

After unsuccessfully testing out various fruit fly eradication strategies, John finally hit on something that (strangely) seems to be working really well.

Here the run down in his own words:

Several weeks ago, I put probably a foot or more of shredded paper on the top. On top of this I added a apple cider trap that was sitting on a layer of cardboard. I was pretty excited about that because there were well over a hundred flies in it…probably 500 or so if not more. But it was in there for several weeks, and the flies were still coming.

So one night I remembered you talking about DE, and I have some. I took the fly trap out, and added probably 2 cups worth of the DE directly to the top of the shredded paper and cardboard. I left it alone. Within an hour or so I walked by and counted over 50 flies that were clearly dead or flopping around on their death bed. I was very amazed.

I also know that those are just the ones I could see. I saw a few that landed on the DE on the shredded paper and then fell in between cracks of all the paper. I left it zipped up the entire time. If I walked by the bin, I would hit the screen top to knock any flies into the DE. It has been nice knowing that all the flies eventually land on it and get coated, unlike the apple cider where not all of them would drink from it. 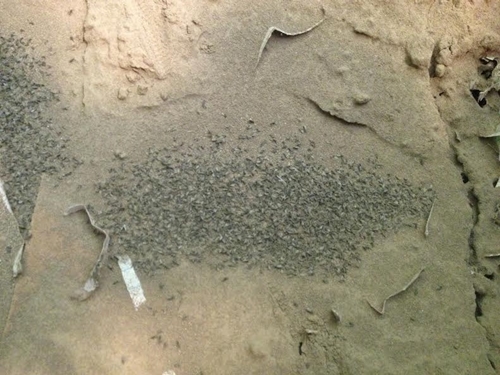 After about a week I noticed it looked damp and so I finally dumped them and just scattered the top again with a fresh coat of DE. I looked in today, and noticed there are only maybe 25 flies give or take. I am ready to open the bin up and start actively vacuuming again.

So I have been fighting thousands of fruit flies for more than a month before DE; and then within a week of adding it, I feel like I can finally win.

Really interesting stuff (and thanks very much to John for letting me share it here)!

While it’s hard to say if DE offers an “all in one” solution for getting rid of flying pests, it does at least appear to offer great potential when used as part of a multi-pronged eradication strategy!

I’m sure some will wonder if there is any chance of harming your worms with DE. Well, the good news is that this is very unlikely. As John touched on, the material becomes ineffective as it soaks up moisture, so the chances of it doing any harm down in the (moist) worm feeding zone are pretty slim.

I’m definitely looking forward to future updates from John (and anyone else who tests this out)!
😎

The One Worm Reproduction Conundrum