Grass Thatch as a Living Material

Last week while I was raking up some old raspberry canes I’d pruned from my patch, I noticed that a lot of thatch was getting raked up as well. It reminded me that I’ve often included thatch among the potential “living materials” you can add to a vermicomposting system as a way to optimize the process.

This inspired me to collect a bin-full of the material so I could test it out for myself. This certainly isn’t the first time I’ve played around with thatch (and grass clippings). Some readers may recall my “Old Grass Clippings & Thatch as Worm Food” post from last fall.

In all honesty, that last batch of material (from a local lawn bowling club) did NOT end up being a worm-magnet by any means (which leads me to believe there was something worm-unfriendly in it, such as fertilizer salts or pesticide). This is partially why I’m so eager to try again with my own material. My hunch is the results will be much better.

I ended up leaving the thatch in the plastic tub for a week or more (simply getting side-tracked with plenty of other activities I have on the go at this time of year) – but I think that’s only improved its value as a worm food/habitat. It compacted a bit, and developed some fungal growth – and smells even earthier than when I first collected it. Remember, that earthy smell is one of best ways to determine the value of something as a living material. 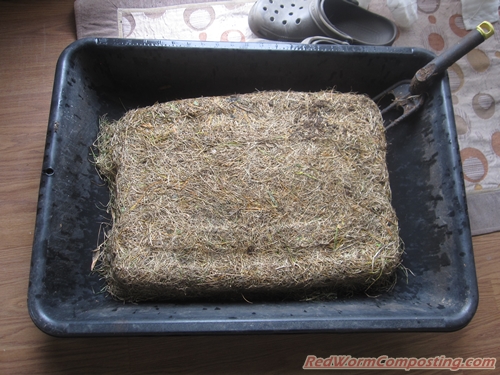 As touched on in the video, it’s important that you:

A) Don’t end up with too much green grass in the mix – at least not when using in a plastic enclosed bin. Grass is especially prone to ammonia volatilization when decomposing – and ammonia is deadly for worms.

B) Don’t use thatch from lawns that are heavily (or recently) fertilized, or that have had pesticides applied to them. These can be harmful for the worms and can obviously affect the quality of your finished vermicompost.

I have added my thatch-food-waste to both of the bins featured in my recent “bin splitting” video. I’m aiming to provide an update sometime next week.
😎

Here again is a link to my Living Material Report if you want to learn more about the topic.

What Kind of Worms For My Garden?