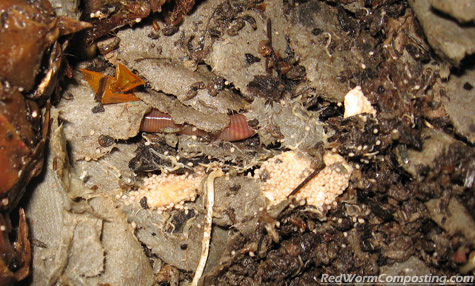 Not something most people would get excited about – in fact, I’ve had some people get in touch recently who were fairly concerned about the new white wigglers in their bin! For me however, it is exciting to get a mini infestation of white worms because it means I can finally try to get some pictures of them for the website! Yeah – I’m a weirdo!
😆

The pics I’ve added to this post aren’t the greatest but rest assured I will keep trying to capture some decent ones. I will also likely fire up my new Eyeclops toy and see if I can get some cool critter footage!

For those of you unfamiliar, White Worms (aka Pot Worms – family Enchytraeidae) are close relatives of the earthworms. Both of these worms are members of the class (might actually be subclass now) Oligochaeta – i.e. they are segmented worms with “few bristles”, unlike the ‘Polychaete’ worms.

White Worms are common inhabitants of rich organic environments, such as is found in a compost heap or worm bin. In particular, they seem to favour acidic conditions, and in fact can be used as an indication of decreased pH in a worm bin. Commonly they will spring up (seemingly out of nowhere) when lots of acidic materials are added to the bin, or when starchy materials are added and allowed to ferment. My very first experience with White Worms dates back to shortly after I set up my very first worm bin. I decided to add a large quantity of rice to my bin (not knowing any better at the time). Shortly thereafter my bin started smelling like a brewery and zillions of these tiny worms appeared. 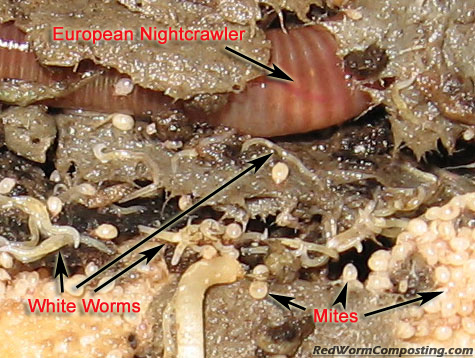 White worms themselves are completely harmless in a worm bin, but again they may be and indication that you are overfeeding, or perhaps adding too much acidic waste.

My recent invasion (which is very tame in comparison to my rice experience) likely stemmed from the addition of a decent amount of pineapple scraps, a very acidic material.

White Worms are actually a very popular fish food among aquarium hobbyists. Interestingly enough, one of the suggested ways for breeding them is to soak a piece of bread in milk then add it to the bin where you are keeping them. I can’t say I’m surprised – this would be the ultimate in sour, starchy concoctions!

I think I’m going to add some baby pablum in an effort to increase the population – more White Worms means more photo opps!
8)