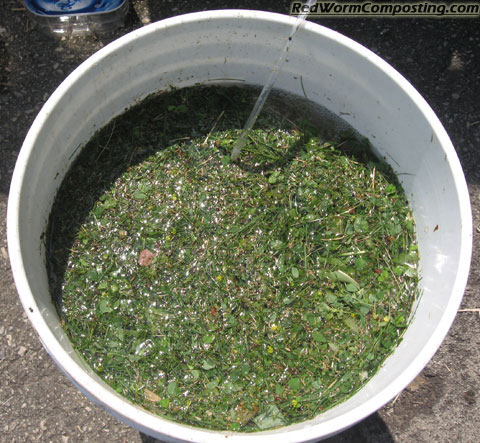 A couple weeks ago I wrote a post about brewing your own microbial soup as a food source for your worms. As mentioned, it is relatively easy to breed your own population of assorted microorganisms simply by adding organic matter to a bucket of water then providing some aeration.

Shortly after writing that post I actually learned the hard way that using smelly (anaerobic) liquid is generally NOT a good idea, as it can contain bi-products (like alcohol) that are harmful or even fatal for your worms. Luckily my mistake didn’t cost me too dearly (only a few dead worms), but it was definitely a valuable learning experience.

Anyway, I’ve decided to make some more microbe water – properly this time – so I can test it out and see what the worms think of it. I’ve added a handful of grass clippings to a bucket of rain water, along with an air stone (connected via tubing to an aquarium air pump). Within a few days I should have myself a yummy concoction.

As mentioned in my previous (microbe water) post, I want to soak cardboard with this liquid and add it to one of my worm bins, along with some cardboard that has been soaking in plain water. It will be interesting to see if there is a major difference in worm colonization rates.