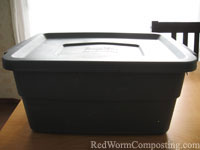 I‘m sure there are a lot of people out there who would need more than a gentle nudge to get them to start composting with worms. After all, worms aren’t exactly as appealing to most people as little puppies and kittens (I’ll admit that I even find my cats more appealing than my worms).

Regardless, there are a lot of great reasons to jump in to the wonderful world of worm composting!

Let’s first start by exploring some of the possible reasons for people not wanting anything to do with a worm bin:

In all honesty, I can’t say I’m too surprised that a lot of people feel this way. There was probably a time when even I found worms a little creepy. But over the years I’ve certainly developed a much different perspective.

Let’s examine each of those potential negatives and see if I can’t manage to put a positive spin on them.

1) Worms are gross!
Sadly, this will probably remain one of the major reasons most people will never bother vermicomposting. Over the years society has gradually distanced itself from nature more and more. Most invertebrates tend to be viewed with at least a certain amount of disdain and worms are probably no exception. Hopefully with more focus on environmental matters in coming years we’ll see many more people re-connecting with the earth and developing a great appreciation for other life forms. If you happen to be a little “grossed out” by the thought of having worms in your house but you like the idea of worm composting in general, why not simply create an outdoor system (or simply add them to your backyard composter)? I guarantee if you approach the process with a childlike curiosity and an open mind, you will develop a new found respect for your wiggling friends.

2) It’s going to stink and attract vermin!
While it is certainly possible to create a horrible stinky mess, with a little attention paid to a few key principles this should rarely be a concern. Stinky smells tend to be caused when conditions go anaerobic (ie no oxygen). It’s perfectly normal to have certain anaerobic zones in your bin, but for the most part our aim is to keep things fairly well aerated. One tactic for creating more aeration is to drill holes in your bin (for air and drainage). Another great way to up the air flow and absorb excess moisture (which contributes to anaerobic conditions) is to add lots of bedding material. In fact I’ve reached to stage of not bothering to drill holes in my plastic worm tubs at all – absorbent bedding is the ultimate ‘anti-stink’ safeguard. Aside from mixing it in (dry) with any food waste you add, be sure to include a nice thick layer at the top – this provides a second wall of defense against bad odors.

3) Worms and bugs are going to invade my house!
I’ll be honest – worms and other small critters will from time to time attempt to venture outside the bin, but this usually only occurs when conditions inside are intolerable. Again, many headaches can be avoided when you continually add new bedding to your bin – I can’t emphasize that enough. It helps to balance excess nitrogen in food wastes, it absorbs excess moisture, it offers more clean habitat for the worms, and it allows for great oxygen flow. Also, something else to keep in mind – if anything does venture out of your bin you can be sure it will be dead within a matter of minutes. Remember, these creatures are adapted for dark, wet, warm conditions.

4) It can’t possibly be good for our health
Naturally, some people tend to think that vermicomposting (and composting in general) is ‘dirty’ and hazardous. Of course (like many things) it certainly CAN be if not done properly. It’s very important to stick to certain safety guidelines (particularly with a small indoor bin), but for the most part people just need to lighten up a little. If you think that completely eliminating microbes from your life is a great way to be healthy you’d be wrong. Not only do ‘anti-bacterial’ agents just tend to lead to stronger breeds of bacteria, but exposure to normal outdoor microbes is important for building up immunity in children.
A reasonably well balanced worm bin should pose no more threat than digging in the garden.

5) Too much work/Not enough time
Aside from setting up your bin (which can be accomplished very quickly), worm composting should take virtually no time at all. You simply add your waste materials to your bin (along with some fresh bedding if needed) and leave the rest up to the worm bin residents. There are of course some advantages to spending a little more time getting to know your system better, but this is certainly not a requirement. I’m sure virtually everyone can spare an extra hour or two per month, right?

6) I tried it once and all my worms died
Can you imagine the state of the world if we all gave up after trying something once. With worm composting, like anything else in life, ‘if at first you don’t suceed…’ – yeah you know the rest. My best advice for people just getting started (or thinking about starting again) is to focus on patience and moderation. As I’ve mentioned in other articles, I highly recommend creating an ideal worm habitat well before you even add the worms. Then once it is up a running make sure to err on the side of caution for at least a few weeks.

7) I have a backyard compost bin
Ok great! The first thing I would recommend is adding some composting worms. They will definitely help speed up the process and provide you with better compost. There have been quite a few scientific studies indicating that vermicompost has some beneficial plant-growth-promoting qualities over and above those found in ‘normal’ compost. Also, you can’t beat the advantage of being able to continue composting indoors during the winter if you decide to set up your own worm bin!

So there you have it. Hopefully I have put some of those concerns to rest, and provided you with some good reasons to start composting with worms!

I’ll be writing a LOT more about all of this in coming weeks and months. In the meantime, if you are interesting in learning more, be sure to check out our “quick facts” and “getting started” pages, and sign up for my email newsletter.