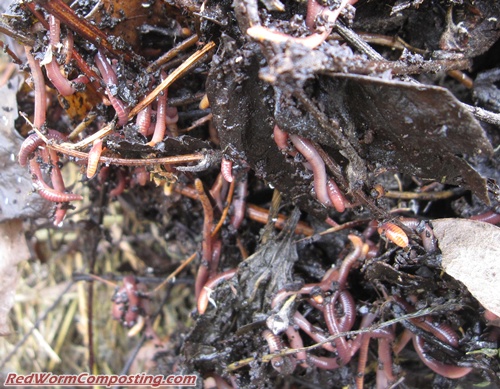 Just wanted to post a quick update for my continuing outdoor-coffee-grounds-vermicomposting efforts. As mentioned a few times, I’ve been receiving grounds from a local “fair trade” coffee shop here in town, and the arrangement has provided me with a good opportunity to “play” with this material.

In the past, I’ve run into issues with grounds when adding them in concentrated zones in outdoor beds. They seem to over-heat and dry out quite readily. The key has always been to keep them nice and moist, and basically just to let them sit. Any time I’ve found decent numbers of worms in coffee grounds (outside) it’s been in older, wet material.

This spring I’ve been trying something a little different. I’ve been combining coffee grounds with well-aged (and heavily bedded) horse manure. This is a material that holds water well, and worms go crazy for it by itself, so in some ways you might say I’m “cheating” a bit here – haha! I should point out, though, that while the two materials are in the same beds, I am not (yet) actively mixing them all that much. Generally, I’ve been layering the grounds underneath a thick cover of aged manure in a effort to keep them wet. I’ve also been making an effort to keep the grounds in relatively shallow layers.

The one concern I had with this approach was that the beds would get too warm, but given how incredibly cold this spring has been (by typical standards), the additional warmth in the beds has actually been appreciated. We shall see how things pan out once the warmer weather arrives, though! 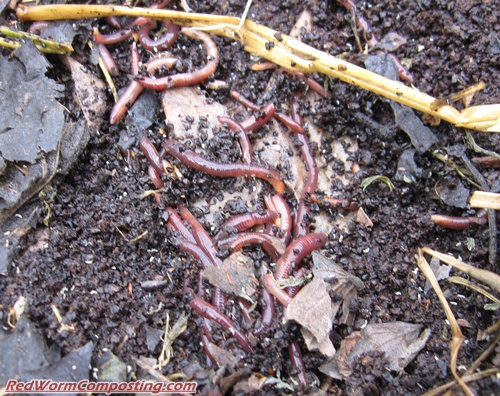 So far so good! I’m finding lots of worms in zones that have lots of grounds, and for the most part the grounds seem to be staying quite moist (fairly wet weather as of late has helped I’m sure). I am definitely starting to appreciate this material more and more!

As mentioned in my last post, I have plans to construct my own compost tumbler sometime this spring (hopefully in the next 2-3 weeks), and one thing I really want to test out is mixing and “pre-composting” coffee grounds with other materials to see if that makes them even more appealing to the worms.