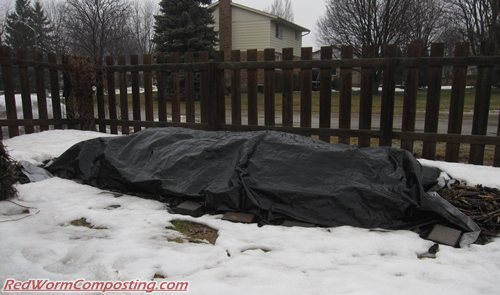 Well…let’s just say I haven’t been nearly as active with my “real world” vermicomposting activities this winter. Bottom-line, my “Winter Composting Extravaganza” basically didn’t happen. I got caught up in the usual whirlwind of other stuff, and never did end up securing a supply of coffee grounds from a brand new cafe in town (mentioned this potential arrangement in this post: “Winter Worm Windrow-12-2-10“).

While spring MAY indeed be just around the corner in my neck of the woods, I figure it’s never too late to have some fun with the windrow system! As it turns out, the coffee shop owner recently contacted me to see if I was still interested in taking their coffee grounds – and, needless to say, I jumped at the opportunity!

Regular readers will know that I have a love/hate relationship with coffee grounds (as a vermicomposting “food”) based on my countless attempts – many of them unsuccessful – to figure out how best to use it. Hopefully this new arrangement will provide me with ample opportunity to do just that!
8)

Before I made my first official coffee grounds pick-up (last week) I decided to thaw out two of my garbage can food scrap holders (I wrote about these bins in the “Winter Worm Windrow-12-09-10” post) so they could be dumped in the windrow as well. I even had some bags of brown leaves left over from the fall!

I won’t claim to have found a steamy warm bed full of Red Worms when I pulled back the tarp on the windrow, but it DID at least look like the system hadn’t frozen solid – so I’m happy about that! Hopefully with a little TLC I’ll be able to get things humming again! As you can see (below) once I added all the leaves and other materials to the windrow (actually added quite a bit to my big wooden bin as well) it was back to its old form again. 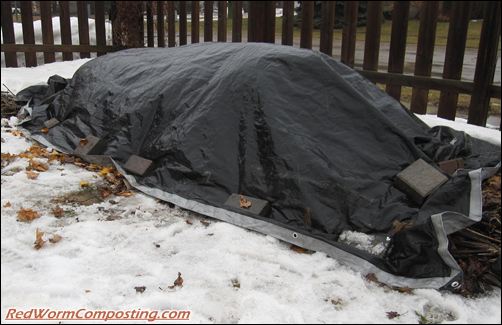 Will be sure to update everyone on my progress with the system (and coffee grounds vermicomposting) again some time over the next few weeks.

A Tribute to “Mark from Kansas”!