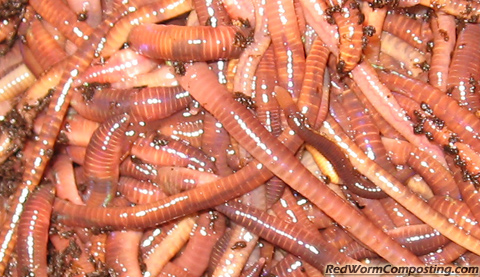 I recently added 5 lbs of hungry Red Wigglers to a large bin I’d set up ahead of time. The bin is a 121 l (32 gal) Rubbermaid-style storage tub with quite a few air holes drilled in the sides and lid. The bedding was a mixture of shredded corrugated cardboard and ‘egg carton cardboard’ with a considerable quantity of food scraps mixed in as well. Given the size of the system, I also had to spend a considerable amount of time moistening the contents with a spray bottle (I don’t like simply pouring water into a worm bin). By the times the worms were added it was definitely in awesome shape, if I do say so myself (haha!).

It was actually very important that I made sure the bin would provide an excellent worm habitat. Not only is 5 lbs of Red Worms WAY more than I would normally add to a bin this size, but I also had to go away for a couple of weeks and thus would not be able to make sure the worms were doing ok. 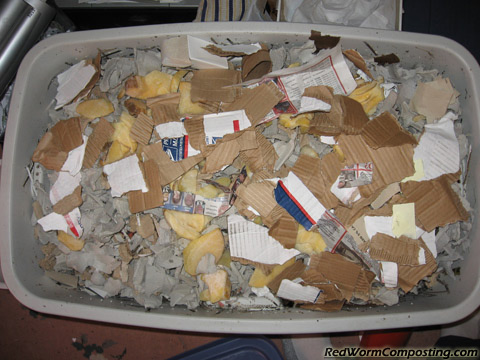 Here is the system prior to leaving for our trip – just before taking this photo I had added a considerable amount of watermelon (a worm favourite), plus a thick layer of cardboard over top. 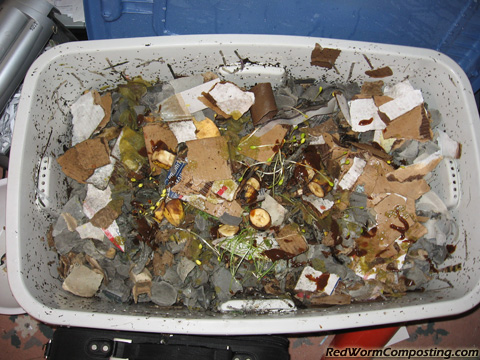 Here is what the system looked like when I got back home. In all honesty, the image just doesn’t do it justice. The only hint of watermelon left in the bin was a cluster of watermelon seedlings that sprang up from the seeds! I thought there would at least be some remnants of the rinds. It just goes to show you what can happen in a nicely optimized system!

Down below the surface the worms seem to have annihilated much of the cardboard bedding, converting it into large quantities of fibrous worm castings. Not only did I find writhing masses of worms as I dug around, but an unbelievable abundance of cocoons!

Thankfully I’m now collecting food waste from a local restaurant, as mentioned in a recent post, so I’ll definitely be able to keep these worms (and all my others) very well fed. Just in the nick of time, too – I suspect this hungry bin of wrigglers would have eaten me out of house and home pretty soon!