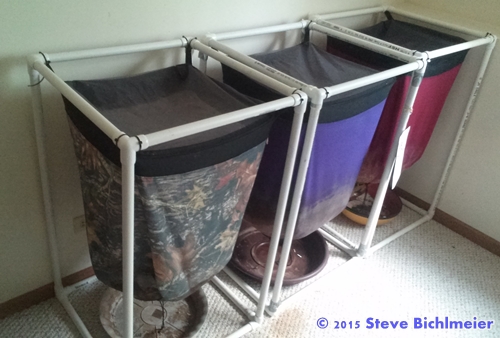 My good friend (and WFA member), Steve Bichlmeier sent me an email last week sharing some info about his testing with different kinds of composting worms in his Worm Inn Mega systems. It sounded like a really interesting project overall, so I asked Steve if he’d be willing to share his updates here on the blog.

I’ll leave you to guess what he said!
😉

Just dropping a line on observations between the two different groups of worms in my Megas. I have one Mega with the five pounds of red and blue worms while another Mega has five pounds of ANC’s.

[As you can see in the photo, I actually have 3 Mega Inns side by side. The camo style to the left is the home for the red/blue mix, the purple is for the ANC’s, the bugandy to the right is a breeder Mega for the ANC’s.]

I initially limited food additions for the first month since I had an equal amount of vermicompost tailings that filled both Megas almost half full. My reasoning on limiting feeding was to encourage more processing of this existing material.

As I have now resumed feedings I am feeding both groups equal amounts of food waste in the same environment. Temperature readings are at constant 80 degrees Fahrenheit with my indoor Megas. I certainly see where the red/blue mix is more of the surface feeder group, as I see more of these worms congregate in the food.

The ANC’s are spread more throughout the Mega, although when I make watermelon rinds a meal they aren’t shy about coming swarming to the surface too. The ANC’s seemed a little reluctant to come to the surface with my initial waste food feedings.

I am thinking that this may be because they were fed a mostly grain-based diet beforehand? When I delved into the Megas a bit deeper recently I see both groups are processing the material at an almost equal rate. The ANC’s seemed to have had some shrinkage due to my initial food limitations. I am confident they will recover from this as I am now increasing feedings to a weekly basis rather than relying only on existing material for the first month.

Something else that I have noticed is that is a bit noteworthy is that I have a bit of a potato cellar aroma in the Mega room. I consider that a good earthy smell that means vermicomposting is progressing as it should. I plan on providing another update in a month or so and possibly harvest the Megas in a four month cycle rather than the six month period.

With the larger population of worms in both Megas they will consume more food and vermicompost.

And here is a follow-up msg from Steve as well:

I have been reading the posts by Larry [Ed. Note: Larry Shier – RWC Facebook group and WFA admin] and he has said crowded conditions and food waste accounts for skinnier ANC’s. I am understanding more of the differences between vermicomposting and vermiculture. I want to tinker with the worm diet a bit in the breeder bin so I can observe the process firsthand. I prepped the burgundy Mega the past two months by simply composting food waste in the Mega for this project. The freezer was getting too full since I had the worms using only the vermicompost tailings as a food source the first month.

I am also including some close-up pics that show the content of the Mega Inns a bit. Both the red/blue mix and ANC Mega are approximately half full. I also started feedings Wednesday August 12 with food waste/shredded paper-cardboard mix. I added 10 pounds of material to each Mega on the left half. Temps increased close to the 95 degree point in the food waste but that has cooled to the point where the worms have moved in and are feeding now. I went ahead and peeled back the vermicompost layered above to have a look. I figured I would add a touch more oxygen and give your audience an idea what is occurring too. 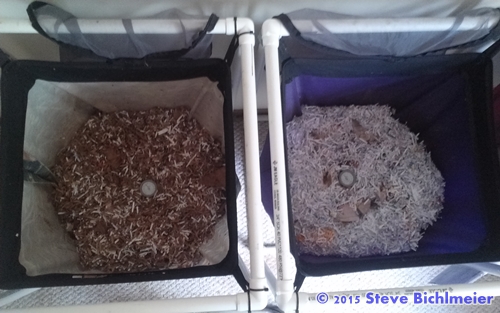 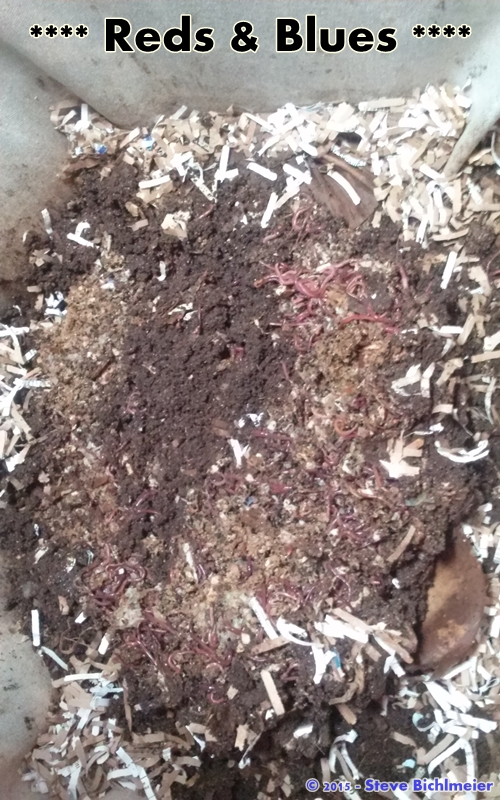 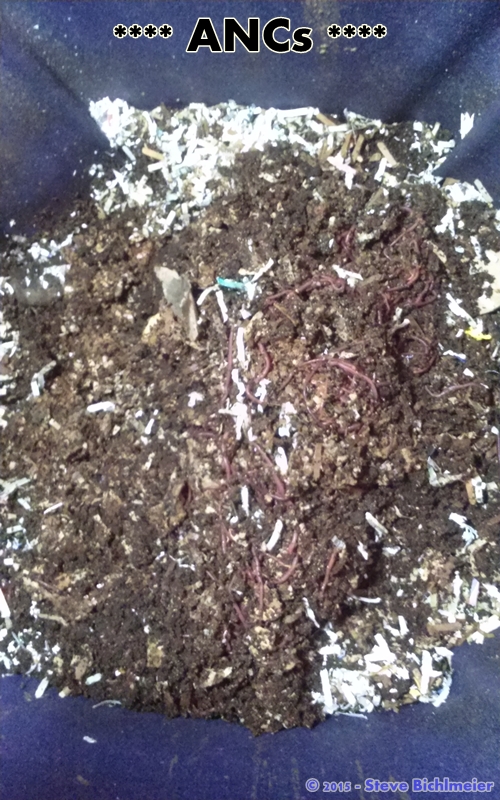 Thanks very much to Steve for his willingness to share! I’ll definitely be interested to see how things proceed in his Megas over the next few months!
😎