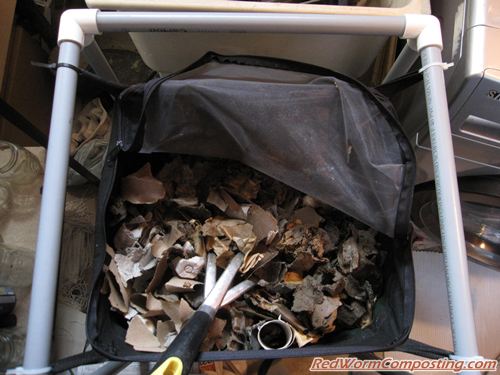 All this recent talk about Worm Inns has reminded me that it’s been a LONG time since I’ve written an update for my own Worm Inn system. I’ll be the first to admit that my various systems have suffered from neglect during the past few months (Worm Composting Windrow?…Whoops!) – but I actually have started tending to my Worm Inn in the last couple of weeks.

Those who know me probably won’t be surprised to learn that I’ve decided to do something somewhat different with the system (I love my “hair-brained experiments”!). Rather than feeding the Inn run-of-the-mill household food wastes, I’m going to convert it into a cardboard-only system. Well – ok, not quite! I’ve decided to provide a nitrogen source in the form of water from my daughter’s goldfish tank.

So far it seems to be working quite nicely! The level of cardboard in the Inn continues to go down, and the worms seem to be healthy and active. I will be very interested to see how things pan out over the next few months – my hunch is that I’ll end up with a LOT of worms, and some nice crumbly cardboard-vermicompost!

I encountered a very surprising sight today – my systems seems to be a veritable breeding grounds for slugs! This is definitely a first for me – and especially intriguing given the fact that this is an indoor bin! Slugs generally don’t do well in regular enclosed plastic worm bins, but I guess the damp (but not soaking wet), well-aerated environment (and perhaps the microbial buffet provided by the fish water?) is ideal for them. I dunno – but very interesting nevertheless!
Maybe I can become a professional escargot farmer!
😉

Thankfully, these don’t seem to be one of the predatory species of slugs (not even sure if we have those around here), so they seem to be co-existing with the worms just fine. 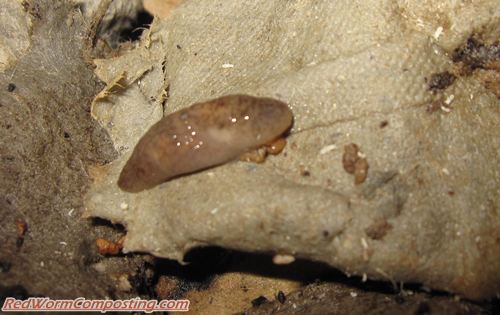 While I was digging around, I also noticed a lot of small, orange globules (see below). At first I thought perhaps that these were slug eggs, but after doing a Google image search I’m pretty sure they must be something else. They may be some sort or slime mold or some strange variety of fungi – hard to say for sure. 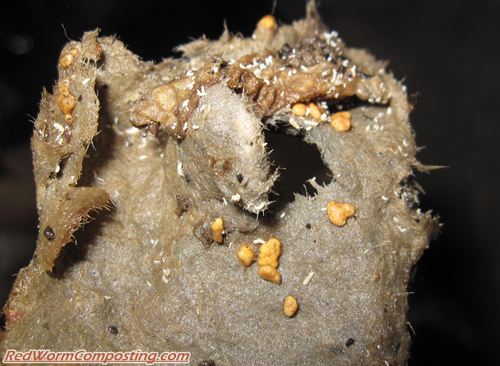 Anyway – that’s basically it for this update. I’ll be sure to keep everyone posted on my progress with the fish-water Inn!
8)