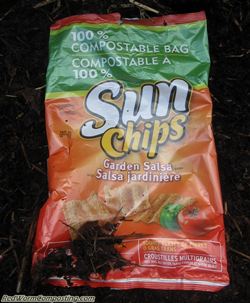 A bit of a funny update for those of you who – like me – were interested in those “compostable” Sunchip bags when they started showing up in stores (and on TV)!

Firstly, thanks very much to Anna K. for sharing an interesting article (about these bags) recently! Looking back at my first post about my Sunchip bag vermicomposting experiment (see “Sun Chip Bag Vermicomposting“), I see that I made a joke about them being “the loudest bag[s] on the face of the planet”.
😆

Well, it seems I wasn’t the only one who felt this way! Apparently their was such a public backlash re: the ruckus these bags make that the company (Frito Lay) created a new bag!

Here is a blurb form the article (link to follow):

The company introduced a biodegradable bag for the snacks in April of 2009 with a big marketing effort to play up its environmentally friendly nature as it was made from plants and not plastic and could break down in compost.

However, customers complained the bag was too loud. The stiffer material made it give off noise of that, measured in decibels, is about as loud as a busy city street. The criticism grew so deafening that the company switched back to its original bag for most flavors in October.

It seems another issue that was equally (or even more) annoying for all us composters, though, was the fact that the bags didn’t even seem to break-down at all! I am going to see if I can find the one I tossed in my backyard composter last year – I have a sneaking suspicion it’s going to look almost the same as it did the last time I dug it up (last summer)!

Anyway – thanks again to Anna for sharing!
Thought you guys might get a kick out of that.
8)