It’s been more than two months since my last “Worm Inn Journal” update – sorry about that!

While the system has certainly been neglected, I should mention that I have added decent quantities of food waste at least two or three times. What’s interesting, though, is that there was absolutely no evidence of this when I looked in this morning. Down below the upper bedding zone all I seemed to be finding was worms and worm castings!

In my last update (see link above) I wrote about adding some really funky food wastes that had been frozen-then-thawed twice, and then left to sit (for too long). Well, as it turns out, that material ended up stinking quite a bit. The lesson here is that even when you optimize (chop up, mix with bedding etc) anaerobic wastes and provide excellent air flow, it’s still going to take some time before things become aerobic, and the smell dissipates.

Unless of course you happen to have some “living materials” on hand, that is!
8) 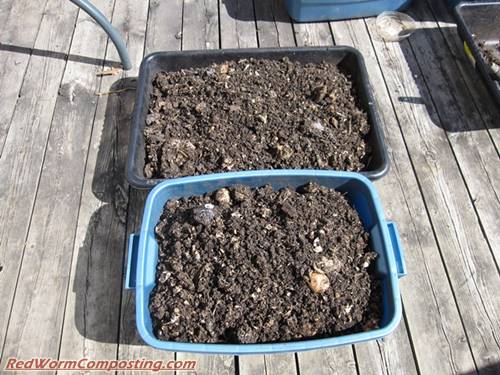 Those of you who have been following my “Worm Briefs” newsletter series may be familiar with the concept of “living materials” – for those of you who are not, the basic idea is that this is any type of material that has a rich/diverse population of aerobic decomposer microbes associated with it, and quite likely a material that is at least partially stabilized (humified). As you might imagine, a prime example would be any form of microbially-active compost, but other examples would include really well-aged manure, fall leaf mulch (or other decomposed leaf litter in general), even well-aged grass clippings and thatch (should be gray/brownish not green). All of these materials should have an earthy smell.

Getting back to my stinky food waste situation…

Once my wife started noticing the smell of the wastes in the Worm Inn, I knew my mellow approach wasn’t going cut it – so I decided to accelerate the process by mixing in some coarse vermicompost (i.e. bulky, partially vermicomposted worm habitat and castings – similar to the stuff pictured above) I happened to have on hand. I was fairly confident that it would help to reduce the odors – after all, various types of compost and mulch are used as odor biofilters – but I couldn’t believe just how fast and effective this solution this ended up being. Apart from eliminating the odors almost immediately, it had the unexpected side effect of helping the wastes to break down much more quickly as well. I was shocked to find that the wastes had all but disappeared within a few days.

Just as freezing wastes has now become a standard practice of mine, it’s safe to say that I’ll be regularly mixing in “living materials” from now on as well.
8)

This morning I added a ~ 3 lb clump of frozen carrot strips on top of the bedding layer in my Inn, dumped some vermi-habitat material over top, and covered everything with a new layer of bedding. 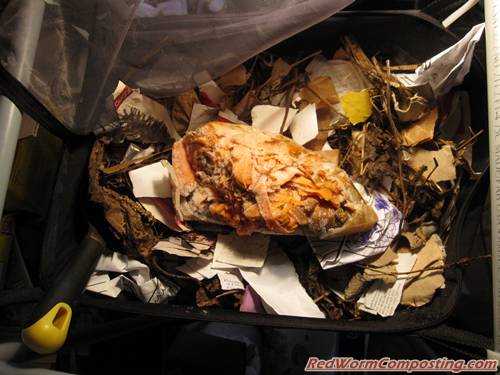 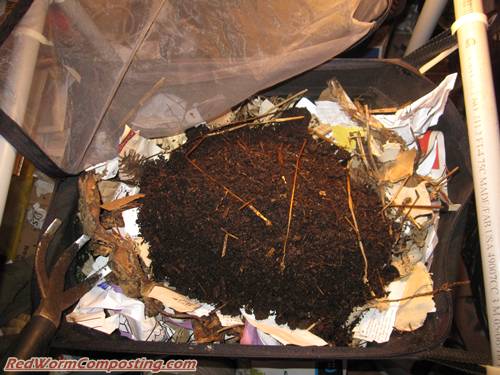 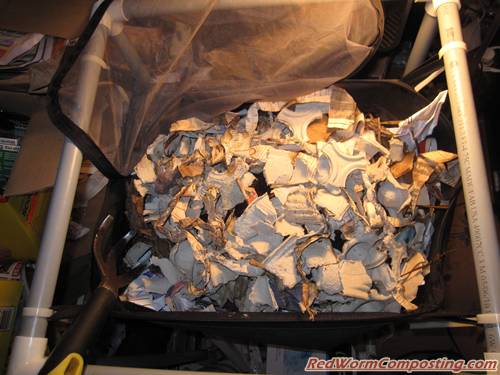 Once the carrots have thawed, I will more than likely spend some time mixing everything up a bit so that the microbe-rich habitat material ends of well-incorporated with the wastes. Assuming I can keep up with a regular feeding routine, it will be really interesting to see just how much waste this system can reasonably process (i.e. I don’t plan to go to the extremes of my “Worm Inn Overfeeding Challenge“) when “living materials” are used as well.

OK – this post is getting pretty lengthy, but I DID want to also mention that I attempted to harvest some vermicompost from the Inn this morning. The system has been active since the fall, so I know there is plenty of processed material down at the bottom (and in fact, as mentioned earlier, most of the material in the Inn seems to be fairly well processed). What I DIDN’T take into consideration, however, is the fact that I haven’t been adding nearly enough food for the worms!

One of the things that seems to concern people about the Worm Inn is the potential for “everything to fall out” when the bottom is opened up. While this is certainly possible if you open it up right after starting the system (although there will be a bottleneck effect that kicks in pretty quickly I suspect), assuming you let the system do its thing for at least a couple of months, this is absolutely not something you need to worry about. As you can see in the image below, I opened mine up completely and nothing fell out – not even the shredded cardboard false bottom I added when I set up the Inn. 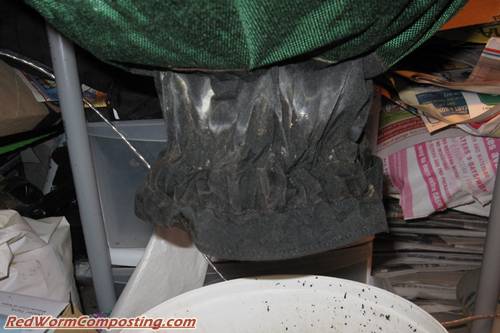 When I started scraping material from bottom, it didn’t take long before there were worms falling down as well. In hindsight, it makes total sense since there is no food keeping them up near the top, and the highest moisture levels are likely now found closer to the bottom.

The material itself looks and smells great – but obviously I don’t want to end up with loads of worms in it. As such, I will try harvesting again in a few weeks after a few more heavy feeding sessions.

Will keep everyone posted!
8)

How to Get Rid of Worm Bin Mites?