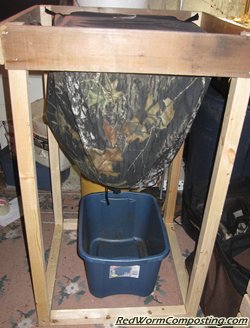 In my last Worm Inn Journal entry I mentioned my plans to start up a Worm Inn Pro once my new wooden stand was available for use (as you may recall, I had set up a system for a customer prior to pick-up).

The other system made it safely to the customer late last week, so I decided it was definitely time to get the new system going this morning without any further procrastination! As you can see, I settled on the ‘Camo’ design for this test system. What can I say? That pattern just gets me revved up and ready for VERMICOMPOSTING!
😆

I won’t bother getting into all the steps I took to set up the system, since I’ve outlined my basic methods for setting up a Worm Inn in a couple of posts now (the one linked to above being the most recent).

There is ONE important distinction worth mentioning however. This time around, rather than leaving the food waste and cardboard to sit for a period of time before adding a batch of worms, I have instead opted to simply add some of the material I refer to as ‘compost ecosystem’ right off the bat – and won’t actually add any concentrations of worms at all.

I offer the compost ecosystem material for sale up here (in Canada) as an inexpensive alternative to buying concentrated bags of worms. As such, this will be a valuable test to see how long it takes for a thriving population of Red Worms to develop from this material. There are plenty of babies worms and cocoons – along with other ‘critters’ – in the mix so there will certainly still be a decent amount of waste processing going on (in fact it should be really interesting to see how quickly waste materials DO breakdown prior to the development of a large population of Red Worms).

I added quite a lot of food waste mixed with cardboard today (along with two bags of ecosystem mix), so I will likely let the system sit for a week or two before thinking about adding anything else. Once it IS up and rolling with a lot more worms I do want to really put the system to the test in order to estimate how much waste I can realistically process on a weekly basis – and how much vermicompost can be produced.