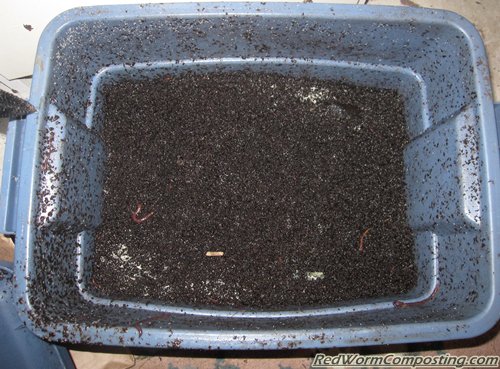 I just happened to check on my ‘dryer lint worm bin’ the other day (this system has been neglected so badly it’s not even funny!). As you can see, the contents have really settled down, and there is a lot of vermicompost in there. There were actually quite a few worms up on the lid so I suspect we are starting to head towards a ‘mature worm bin syndrome’ situation. While I haven’t been adding any new food (which would certainly accelerate the onset of problems), I did add a lot of wet stuff initially without properly balancing with dry, absorbent bedding (in this case, dryer lint).

Digging around in the bin I saw that there were still LOADS of healthy looking Red Worms (more evidence of the fact that neglected worms usually do far better than those you try too hard to ‘take care of’), but the material they were living in was pretty swampy, both in appearance AND smell!

I decided it was probably time for me to do some maintenance on the bin, and given the wet stinky conditions I knew that there was only one real solution – adding dry bedding!! 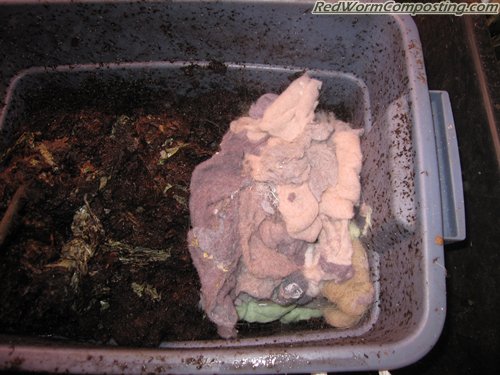 I pulled back the sludge on one side of the bin and stuffed in some dry lint, then did the same thing on the other side. I was a little worried given how dry this material was so I also decided to add some watermelon at the same time.
Keep in mind, that all of this is a SUPER lazy approach to vermicomposting, and NOT what I recommend as far as properly taking care of your worm composting system goes!
😆

Anyway – it will be interesting to see what happens once the lint gets moistened nicely. Bare minimum, it should at least help to soak up a lot of the excess liquid and make things a bit more aerobic in there. Perhaps the worms will move into the new bedding fairly quickly as well.