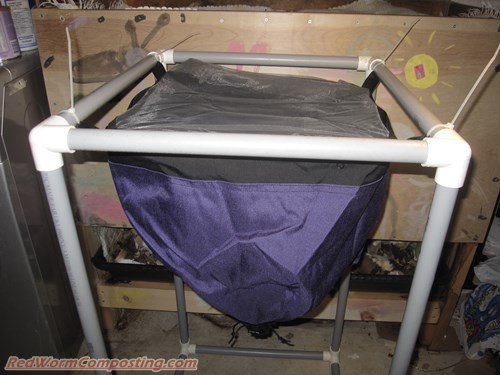 After careful thought and deliberation I’ve settled on two winners – that’s right, TWO WINNERS – for the “Worm Inn Project Challenge“! Both of these ideas will be combined for the new Worm Inn project.

All in all, I was really pleased with all the great ideas that were submitted! I’m hoping/planning to try some of the other ones in various ways (using other systems etc), and I would LOVE to see some of you Worm Inn users out there trying some of them as well! (Speaking of which, Larry – I’ve started stockpiling gum in your honor, buddy! …NO, that’s not an April Fools joke! lol)

The two winners chosen were: John “I never win anything” White (LOL) and Paul Letby! Congratulations to both of you.
You will each receive a brand new Worm Inn + worms (big thanks to Jerry Gach for his generous assistance with the prizes).

I REALLY like John’s idea of coming up with a specific goal weight (of wastes) and seeing how quickly we can get there. But with a project like that you need some “competition” – and that’s where Paul’s idea to pit the Worm Inn again a regular plastic worm bin comes in!

I’m really excited about this one. I think it’s going to be a lot of fun!

The key was to find something fairly easy to set-up and maintain – while still being really interesting. It needs to be indoors, and to not result in ME being forced to sleep outdoors (aka “in the dog house”! lol).

Now we just need to work out the details!

It’s going to be important that the two bins receive exactly the same waste materials and same bedding materials. As such, I will likely need to come up with a pre-determined food “mix” that always get’s used. OR perhaps I can simply freeze the portions for the bin that is behind.

Initially, they will both receive the exact same amounts of everything at the exact same time. But once one of the systems enters “overfeeding” territory (while the other is still ok to receive more food) I’ll need to start staggering feedings, while still making sure that the slower system is receiving the same food in the same order.

As for worms – I’ll be using Red Worms and I think I’ll aim for a good sized starting population (exact same size of course) in each system since I want to hit the ground running.

I’m hoping to get everything set up and rolling later in the week or early next week.
If you have any additional thoughts/ideas about the experimental design don’t hesitate to let me know (in comments below). And also let me know if you plan to try any of those other Worm Inn project ideas! Would be great to follow your progress.

In case you are also wondering about the exciting “new development” on the Worm Inn front, let me assure you that I’ll post an update about that fairly soon as well!
Thanks everyone!
8)