I decided to check up on the “Euros vs Reds” bin today. My main aim was to absolutely make sure I could find all the adult worms I had added (as you may recall, I wasn’t able to find all the Red Worms when I last checked). But I also wanted to get a feel for the approximate number of cocoons (and juvs, if any) present as well.

Unfortunately, I had it in my head that I was looking for 6 Red Worms and 6 Euros – so as you can probably imagine, I ended feeling pretty concerned when I was only able to find 3 of each!

DOH!! (yep, it was only 3 of each that had been added in the first place! lol) 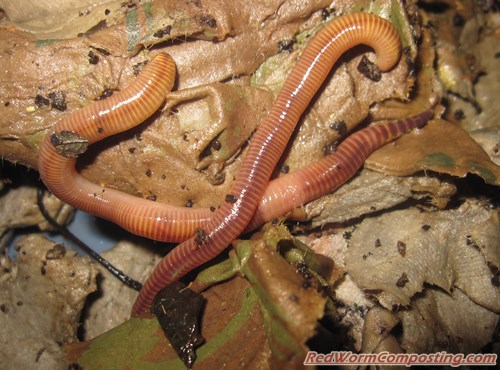 What’s interesting is that I also found a young Euro in there (in hindsight I’m kicking myself for not snapping a picture). To be honest, I’m not really sure what to make of the situation. Given the size of it (considerably bigger than a hatchling), I can’t help but wonder if I somehow accidentally added a mature Euro cocoon or a small hatchling worm along with the adult worms. It seems highly doubtful that a Euro cocoon could have been laid on – or shortly after – Feb 19th (when I introduced the worms) and the worm to have not only hatched, but to have developed well past the hatchling stage. As quoted in one of my “Worm Briefs” (available via the RWC newsletter), Edwards & Dominguez (in a chapter of “Vermiculture Technology”) offer an average incubation time of 42.1 days for Euros (18-26 days for Red Worms). It’s only been 37 days since the worms were added – and I also didn’t find a single juvenile Red Worm.

As for cocoons…I found 10 Red Worm cocoons and 8 Euro cocoons. Keep in mind that this should only be considered a decent estimate. I did go through the material pretty thoroughly, but did not unfold every last scrap of bedding etc etc. Like I said, I just wanted to get a decent feel for the approximate number of cocoons. 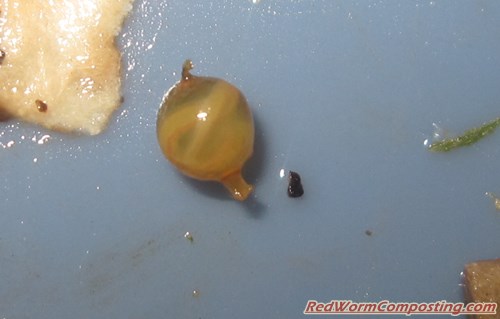 What was interesting was that, on average, the Red Worm cocoons definitely seemed to be closer to hatching. This is indicated by darker coloration and clearly-visible young worms inside. This would make sense given the typically-shorter cocoon incubation times for Reds. There were SOME mature Euro cocoons (such as in the image above) though, but most didn’t have anything recognizable as a young worm inside.

I think things are going to start to get a bit more interesting in coming weeks!

Not really sure what to do about the young Euro, though! I’m becoming more and more convinced that it was introduced accidentally (whether as hatchling or mature cocoon), rather than being born in this system. As such, I don’t think it should remain a member of the experimental population.

I’m interested to see what you guys think though!
8)