I’ve been having a lot more fun with the VB48 ever since eliminating the pressure of having to weigh everything going in. Not too surprisingly, a lot more food etc has been added as a result!

I’ve actually been really blown away by how quickly materials are getting processed in there (the irony is that it kinda makes me want to start weighing everything again! LOL).

Aside from lots of food wastes, I’ve also been playing with various other “foods” as well, such as hydrated alfalfa cubes, and various bedding materials soaked in molasses-infused fish tank water. Now that I have my catch bins down below (more on those in a minute), I’m not nearly as concerned about excess moisture or worms falling down from the bottom – so I’m able to “play” a bit more.

Speaking of which…and this may sound a little weird (if not downright disturbing)…I recently tried something that might be considered a “no no”. I’m almost a bit self-conscious about sharing it here. We had a recent pet mortality…BUT, before you go assuming I tossed a cat in the bin (would definitely need to be an outdoor bin for THAT! haha)…let me assure you it was something much smaller – my daughter’s goldfish (I’m still not 100% sure if it was “Marlin” or “Nemo”, but he lived a good life!).

She was actually surprisingly supportive of the idea of turning him into compost…although, it naturally led the conversation towards awkward territory with questions like “will Monty (cat) get composted when he dies?”, “do people get composted?” (as I joked with my dad later, they DO in mafia movies!! lol).

OK, so back to the goldfish…

Given the small size of the fish (and the large size of the VB48), I figured this would be a pretty innocent little experiment for an indoor situation.

Still, I was actually quite apprehensive about monitoring my little experiment. In all honesty, I (naively) hoped I’d just leave it in the corner of the bin and basically forget about it. Of course, that didn’t happen. My curiosity ended up getting the better of me, and by today I felt utterly compelled to check up on the situation. What I found really surprised me!

I thought for sure, I’d find a rather nasty bloated, rotting fish corpse (with all due respect to Marlin/Nemo) and end up greeted by a foul smell. As it turns out, I found lots of worms in the immediate vicinity of where the fish had been laid to rest (if you can call it that) – and a little orange morsel of something I’d never have guessed was formerly a fish had I not known that was where I’d put it. There was no foul smell either.

Hmmm…makes me wonder (and worry – lol) where this might take me.

In other news…(he says, quickly changing the subject)

A recent basement clean-up session uncovered quite a few boxes of old “BioBag” compostable kitchen scrap bags (originally purchased to sell via my local vermicomposting business). It’s been a number of years since I bought them and they no longer have any resale value (they’ve become quite fragile). So I figured I’d find a use for them.

What I came up with was a bio-plastic mulch for my VB48 bin! The material will gradually break down over time, but in the meantime it’s helping to keep the bin contents nice and moist (while still allowing decent air flow). 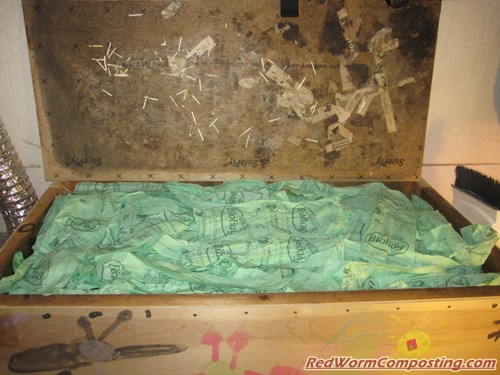 I’ve been having fun with my lower catch bins as well. The worm population in both of these containers seems to be growing quite quickly, and I’ve been augmenting whatever has fallen down from above with plenty of additional bedding and food materials. There seems to be a mix of worms in the bins, but certainly more Euros than reds. 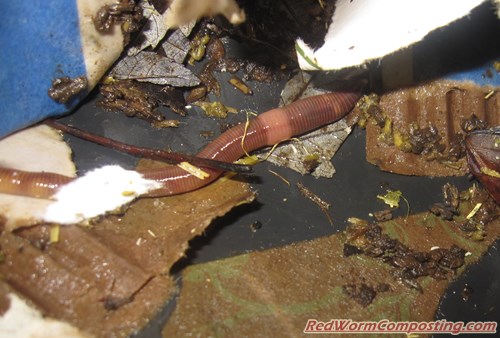 The only negative is that I now seem to have a bit of a “moth fly” (aka “drain fly”) invasion on my hands (due to some material brought in from my outdoor beds). They really seem to like the cool, wet conditions down in these lower bins.

Today I removed the package containing the remains of my last Steinernema feltiae (parasitic nematodes) purchase from the fridge. They’ve been sitting in there for months now, so I’m not sure how viable they will be. Nevertheless, I mixed them up with some distilled water and added the concoction to both of the catch bins, and also to another Euro bin that also seems to have a lot of the moth flies. We’ll see what happens.
(I also placed an order for more of the nematodes, so the moth fly party is going to come to an end regardless! lol)

That’s basically it for today. I’m sure there will be one or more VB48 “experiments” on the horizon soon – just need to give it some more thought (and of course get my Worm Inn project up and running in the meantime)