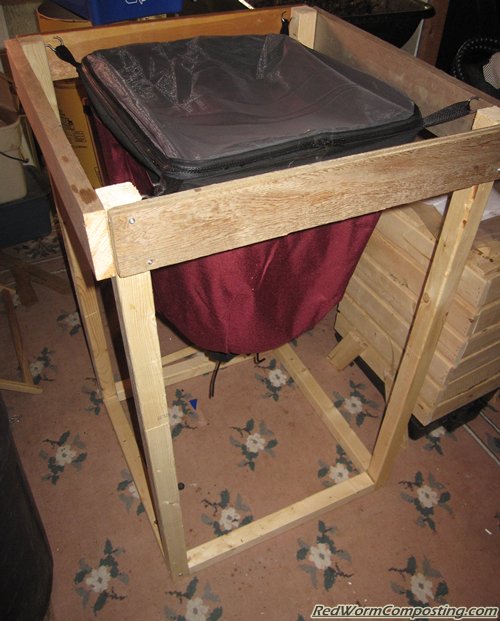 I’m quite surprised that I wouldn’t have written a post on this topic a lot sooner, but I guess hindsight really is 20/20!

Anyway, as the title implies, I want to talk a bit about Worm Inn stands – basically, letting people know what sorts of options are out there. Many of you will likely remember that my dad and I build a DIY stand last fall. So far it has certainly worked MUCH better than the small, flimsy wooden laundry hamper stands I used originally. As such, I have been sharing the specs with Worm Inn customers so that they can create something similar for themselves.

Let me remind everyone that I am NOT a talented DIY person (my dad is somewhat better, but not by much), so I have little doubt that many of you could improve upon this design by a long shot. But here ya go, for what it’s worth:

The system basically consists of 4 legs and 8 support beams. The upper supports overlap the legs, while the lower supports are actually in between the legs (refer to photos to see what I mean).

Upper supports – (4 x) 21″ length x 3.5″ height x 0.75″ width – the lengths are really the only important consideration. We were just using some scrap wood I had lying around. I would still recommend some sort of flat boards up top though (and overlapping of legs) since it provides you with spots to screw in the hooks.

Lower Supports (4x) 18″ length – ‘2×2’s – as mentioned, these sit in between each pair of legs, and help to straighten the structure out a bit.

(4x) Screw hooks – I would get ones that are a little sturdier than the ones we got. I’m not sure how these ones will fare as the weight increases. As you can see in one of the pics, we had to play around with the location of the hooks at little bit in order to be able to get all the loops over them. You MAY even want to decrease the upper and lower dimensions of your stand if you want the Inn to hang a little more. 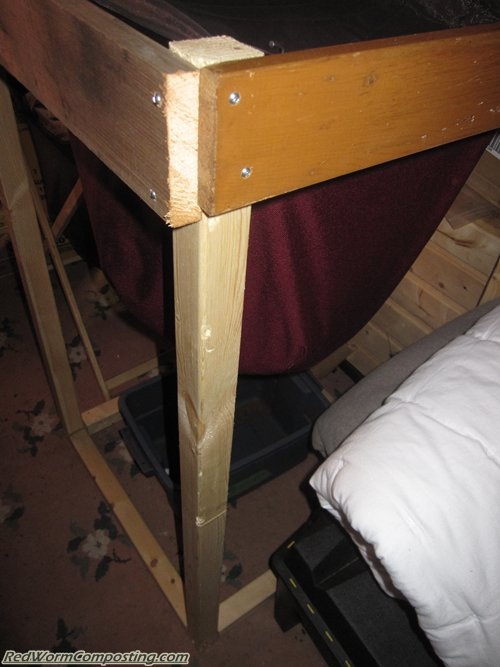 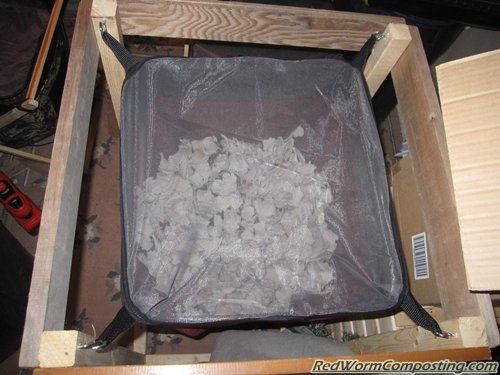 Now, it probably wouldn’t hurt to discuss some of the other options out there as well. Some may recall that Robyn Crispe (the original creator of the system) tried both a hanging set-up and a laundry hamper stand – with a definite preference for the latter. I agree with this wholeheartedly – not only does hanging make it more difficult to move the Worm Inn around, but unless you use some seriously heavy duty bungee cords (or something comparable) you may also run into issues once the system becomes really heavy. 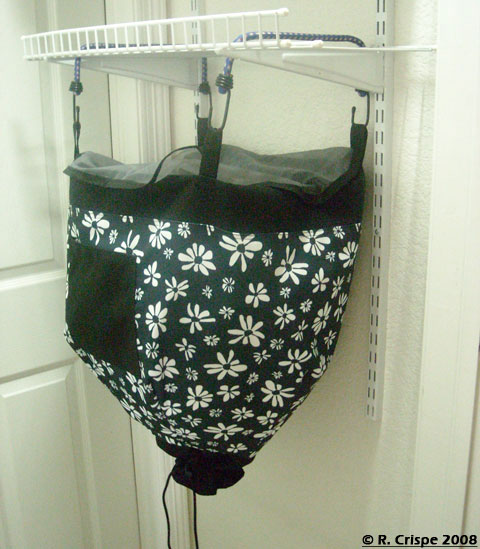 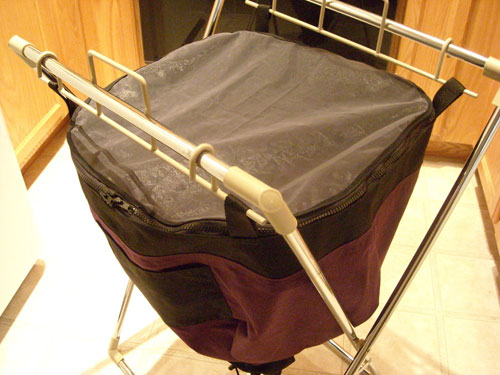 I’m pretty sure that Robyn got her hamper stand from Target, so if you are keen to keep things simple, and go with this approach, I recommend you check them out. As mentioned, the stand I originally tried was a smaller, wooden one (available from Canadian Tire, up here in the ‘Great White North’), and while it worked great initially, as the weight of the system increased it became more and more unstable. I can only imagine what would have happened had I been adding the sorts of quantities of waste I’ve been recently adding to my system!

One other cool stand idea has been suggested by the new owner of the Worm Inn brand, Jerry Gach. He has created a really nifty stand using PVC pipes and special corner pieces. The only downside is that those corner pieces can sometimes be a bit challenging to track down! 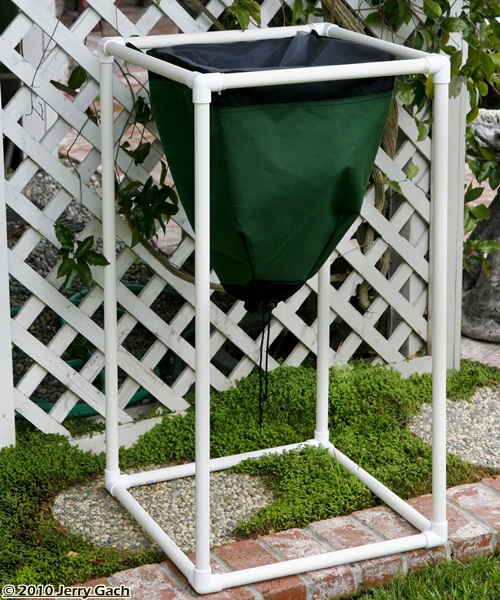 Anyway – hopefully, this helps to show some of the possibilities. If anyone has created their own stand and would like to share it with RWC readers, be sure to drop me a line!
8)